When the All-Star rosters came out earlier this week, there was a loud collective groan from the NHL’s newest fanbase. Of course, Vegas fans were happy to see Marc-Andre Fleury and James Neal make the Pacific squad, but the snubs of William Karlsson and Jonathan Marchessault ticked off the VGK faithful… including someone I know.

Marchessault and Karlsson have both been named as alternates, but this does not change the fact that the NHL is a complete joke.

Without getting into the dynamics of the All Star Game, like all leagues, the NHL focuses on big-name players. Lesser named stars are having to wait their turn, which is pretty lame. Neal and Fleury fit the league’s criteria; notable players, having productive seasons, their team is in first place, and they are a part of an amazing story. Boom, they’re in. 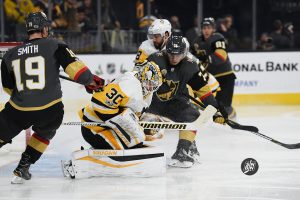 Who needs the ASG when you’ve got Hart on the mind? (Photo Credit: SinBin.vegas Photographer Brandon Andreasen)

Unfortunately, it stiffs guys like Karlsson and Marchessault. Who are both deserving of an All-Star nod, but will be forced to be alternates. However, Karlsson should look at the bigger picture… the Hart Trophy.

NHL.com recently published an article on the Hart as part of their “Trophy Tracker” series. Unlike the All Star Game, they did not overlook the Golden Knights lesser named star.

Karlsson’s play in the first half has been Hart-like, but he’s up against big stars having great seasons as well. Tavares, Stamkos and Kopitar, the three centers ahead of Karlsson are having fabulous seasons, but #71’s numbers are relatively comparable. He tops the center charts with 17 even strength goals and 5 game-winning goals. Let’s not forget he leads the league in shooting percentage (wink wink). Karlsson’s 22 goals are tied with Tavares, and his +20 is one point higher than Stamkos.

Award voters should also consider all-around play and the Golden Knights team record. The success could help Karlsson, especially if Kucherov and Stamkos split votes. Tampa’s top line has produced 59 goals, compared to 49 goals by Karlsson’s line. Ten goals is a lot, but Stammer’s line has given up more points than the Marchessault- Karlsson-Smith line. Voters may look at overall points, points per game, and faceoff percentage which could hurt Karlsson’s Hart Trophy chances. He may not win but there is no one more deserving than Wild Bill.

Plus, if not the Hart, there’s always the Selke!

Marc-Andre Fleury now leads the NHL in shutouts with 4 in 15 starts.