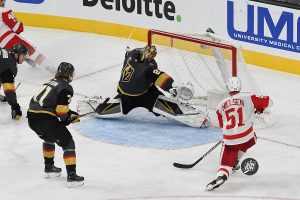 The NHL has released the full rosters for the 2018 NHL All Star Game and the Western Conference leading Vegas Golden Knights have two players on the Pacific Division team.

Forwards James Neal and goalie Marc-Andre Fleury have been selected to the game. It is both Neal and Fleury’s 3rd appearance.

Neal has scored 18 goals and has 11 assists for a total of 29 points. He was instrumental in getting the Golden Knights off on the right foot scoring game winning goals in each of the team’s first three games.

Fleury has been selected despite playing in just 12 games. Nonetheless he does sport a 9-2-1 record, a 1.73 goals against average, and a .945 save percentage. 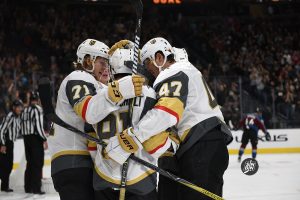 Somehow neither Jonathan Marchessault nor William Karlsson have been selected despite leading the team in goals and points on the season. Both have been named alternates.

Also, Gerard Gallant will coach of the Pacific Division by virtue of the Golden Knights having the best record.

The 2018 All Star Game will take place at Amalie Arena in Tampa, Florida on January 28th.

I didn’t expect this because I haven’t played too many games this year. I’m excited because it’s always a nice honor to be a part of. I just feel like there’s so many great players around the league and they only pick a few. It’s an honor to be a part of those guys. It’s part of the excitement of the All-Star game. I’m fortunate. This wouldn’t be happening without the help of all of my teammates. They’ve helped me look good throughout the season. I thank them for that. There could have been a lot of guys from this team that got to go, don’t you think? We’ve got so many guys stepping up throughout the season. Marchy has 40 points right now. That’s awesome. William Karlsson has scored so many important goals for our team. Subban has been playing great in net, too. I wish the other guys could do this too and be a part of it. Too bad there’s only a few of us going. We get to go because of all of the work that they’ve done this season. -Marc-Andre Fleury

It’s very exciting to be named to the All-Star team. I’m looking forward to representing our team in Tampa and share the All-Star experience with Marc-Andre and Coach Gallant. Having three representatives from the Golden Knights is a great honor, there are a bunch of guys on our team who are having All-Star caliber seasons. Thanks to my teammates and coaches for their great play this season and Golden Knights fans for their unbelievable support. -James Neal