Most of the time when people pick on the Golden Knights they do it with blind disregard for the truth. However, every once in a while there’s a legitimate claim as to why what’s happening for Vegas may not continue. But don’t worry, we’ll always be here to prove them all wrong. 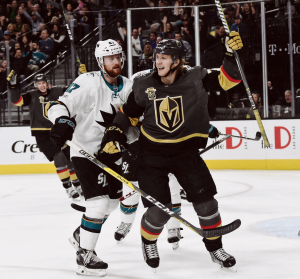 I don’t shoot often, but when I do, I prefer to score. (Photo credit: Vegas Golden Knights Instagram)

One of the most common reasons cited for why the Golden Knights may not be able to continue the pace they are on is shooting percentage. At the beginning of the year, the numbers were absurdly skewed in favor of the Golden Knights, especially at home. At the 41 game mark the team’s shooting (10.6%) and save percentages (91.4%) have come back to earth and actually now indicate sustainability is likely.

That being said, William Karlsson, the Golden Knights leading scorer, also leads the NHL in shooting percentage at 25.9%. Karlsson has taken 82 shots and 22 of them have found the back of the net. This should be unsustainable. His career shooting percentage is 12.6%. The most goals Karlsson has scored at any level was 15 for HV71 Jonkoping in Sweden.

Yeah I’ve seen people on Twitter. So yeah, it’s a bit high. I guess it’s going to slow down a little. -William Karlsson

Well, I’m here to tell you that, and I came armed with pictures to back it up. Karlsson has scored 22 goals this season, below is a picture from the exact moment when the puck leaves his stick and heads towards the promise land. Keep your eye on the amount of net that is open in just about every image.

Goal 1: Cross ice pass from Smith on an odd-man rush. Goalie has no time to come across. (Net Mostly Open)

Goal 2: Tip-in chance from in front of the goal. (Net Covered)

Goal 4: Wrap around attempt. Puck is in the goal before it leaves his stick. (Net Completely Open)

Goal 6: Breakaway attempt using the backhand. Prior to the move the goal is covered, but as the puck is slid to the backhand, he beats the goalie. (Net Partially Open)

Goal 7: Centering pass from Tuch from under the goal line. (Net Mostly Open)

Goal 9: Misplay behind the goal by goalie, pass to the front of the net, goalie no where to be found. (Net Completely Open)

Goal 13: Tip-in chance from in front of the goal. (Net Covered)

Goal 14: Tip-in chance from in front of the goal. (Net Covered)

Goal 17: Centering pass from Smith. Goalie in the process of coming across. (Net Mostly Open)

Goal 19: Marchessault pass from under the goal line. Goalie not fully aware of the puck coming to the front. (Net Partally Open)

Here are the final counts.

If you take out of the 6 shots in which the net was covered, Karlsson would still be shooting 21.1%, good for fifth in the NHL this season.

I was joking earlier with my buddy, he brought up the shooting percentage and I was like, ‘I only shoot when I score’ so hopefully I can keep it up. -Karlsson

Yes, the shooting percentage is insane, but the league leaders over the course of the past 20 years have all fallen between 20-24%, so the 25.9% number isn’t as ludicrous as it sounds.

I just feel really confident that when I get an opportunity that more often than not it goes in. If I have a shot attempt or a situation where I need to shoot I’m obviously going to take the shot, even if it’s at a bad angle. I guess my mindset is, just keep shooting, just keep scoring. -Karlsson

Karlsson is likely to continue playing on a line with Jonathan Marchessault and Reilly Smith, and as long as they keep playing the way they have, there’s no reason to believe anything will change with Karlsson,  and yes, that includes shooting 25+%.