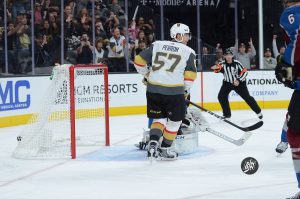 David, will you be our own rental? (Photo Credit: SinBin.vegas Photographer Brandon Andreasen)

It’s the million dollar question for the Golden Knights who remain atop the Pacific Division and the Western Conference halfway through the season. The plan coming in was likely to sell, and sell hard, at the February 26th trade deadline. Then 41 games were played, the Golden Knights lost just 12 of them, and now the landscape looks a bit different.

Due to Vegas’ complex situation, the answer to the “buy, sell, or hold?” question can’t really be just one of those three words. Instead, it will be something like “sell to buy” in which Vegas ships away a UFA or two and bring in a replacement NHL caliber player immediately. Or there’s this scenario which was brought up by Gary Lawless while joining the SinBin.vegas Podcast, something that can be defined as “hold to buy.”

Teams that are in the position of George McPhee’s team acquire rentals. They go out and they say ‘we’re gonna win, so we’re going to take our 1st or 2nd round draft pick and we’re going to trade it for that terrible team’s best scorer who is going to be an unrestricted free agent in July. We’re going to buy him for 12 weeks and we’re going to hope that we win a Stanley Cup.’ If it comes to pass that Vegas is a playoff team and they don’t sign one of their pending free agents, and they use that player to win one or two playoff series, that’s their own rental. -Gary Lawless, VGK Insider

It’s reverse psychology, trade deadline style. Rather than adding a piece, you just don’t subtract a piece that should have been subtracted. The “own rental.”

James Neal and David Perron are the Golden Knights “own rental” candidates. The original plan (which was to go to the playoffs by year three and win the Cup by year six) called for a return of assets before Perron and Neal, but now, with the team in a position to win in 2018, they are “selling” the chance to gain those assets for opportunity to keep Neal and/or Perron and hopefully raise the Cup in June.

The price is a loss of assets that were expected to be added, but in reality, the loss is something that never tangibly existed and the gain is a potential parade down Las Vegas Boulevard. It’s the best situation any team can be in, and the Golden Knights are in it. They “hold” which appears as a “buy” and the only cost is something you never had in the first place.

Makes a lot of sense right? I knew Lawless was going to come in handy for something one of these days.