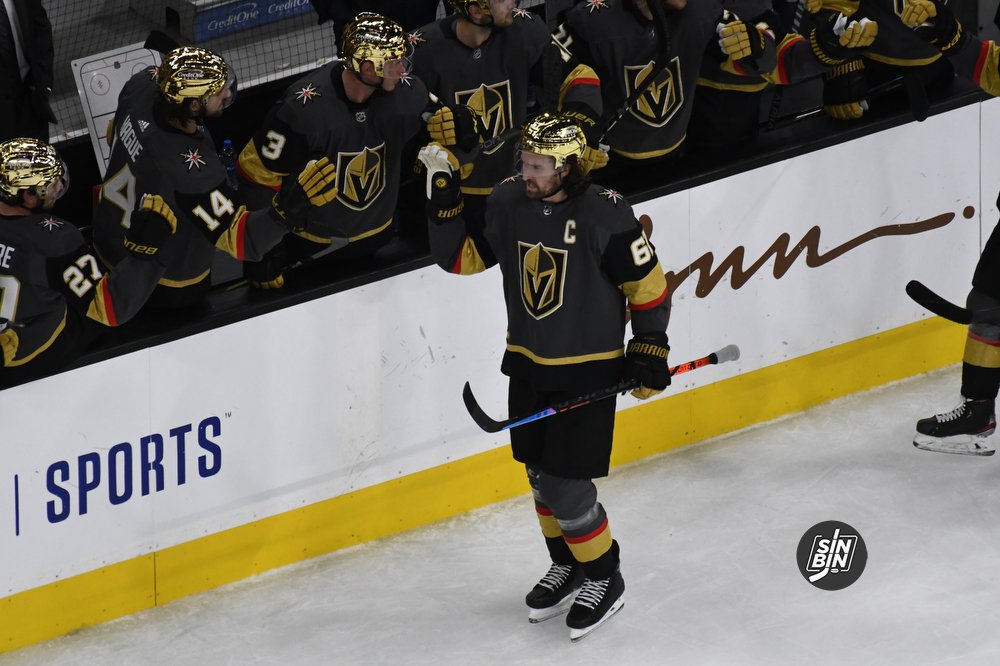 Coming off a postseason in which the Golden Knights sunk to nearly historic lows followed by a year in which they sputtered all the way through, improvement on the power play is one of the quickest ways to bring playoff hockey back to T-Mobile Arena. It’s not the only reason he’s here, but it’s certainly at the top of the list of why Bruce Cassidy is the Golden Knights’ new head coach.

Prior to the 2021-22 season, Cassidy graciously accepted the role of guest speaker as part of The Virtual Hockey Summit on TheCoachesSite.com. Cassidy’s presentation, which lasted more than half an hour, was called “Principals of the Power Play.” In the video-clip-laden presentation, Cassidy goes in-depth on every aspect of the power play including showing off a few drills to run in practice. He breaks down exactly what his units are looking to achieve and how he goes about teaching the players to get it done. It’s an absolute must-watch for anyone interested in the X’s and O’s of hockey.

(TheCoachesSite is a subscription-based site with a monthly fee of $15. The video is one of hundreds tailored towards helping coaches improve at their craft. Click here to subscribe.)

The presentation was so informative about Cassidy’s coaching vision that we are going to use it as the basis of a series of articles releasing over the course of this week and next devoted exclusively to the Golden Knights new power play.

In this, part one, of the series, we’re examining entries. What are Bruce Cassidy’s general philosophies on how to establish the zone on the power play and the systems he implements to do it?

The groundwork for Cassidy’s entire power play system is set up on a simple ideal that pertains mostly to entries but persists in every second his teams have the man-advantage.

The idea is that all five players need to work together to establish possession of the puck inside of the zone before they head to their assigned positions in the power play setup. When Cassidy draws up entries, there is a role for every player that is separate from what they’ll be expected to do once the team is in the zone. He always wants players to present themselves as options to the puck carrier and work to areas that will help relieve pressure.

Not until the team has full possession of the puck and has broken any backchecking pressure are the players expected to do anything but support the entry. This bleeds into the next philosophy.

Always look to score off the rush.

Typically, we think of power play goals coming from neatly crafted passing plays, but in reality, many of them come before all five offensive players have even entered the zone. As a team comes up the ice to take on the neutral zone setup of the penalty kill, there’s typically an element of speed involved by both the puck carrier and at least one other offensive player. Cassidy’s approach is to look for scoring opportunities off these entries as there can often be a numbers advantage early in a possession.

Cassidy’s most common entry format (which we’ll get to momentarily) includes a player carrying the puck into the zone with speed, another flying down the opposite side of the ice, and a center driving the net. If the defense does not collapse to take away all of these options heading towards the goal, Cassidy wants his players to make the quick play and look to score instantly.

Next, is a simple math equation that Cassidy prefers while many other coaches do not.

If a forechecking killer can be taken out of the play by sacrificing an offensive player, do it.

In other words, if the penalty kill sends a forechecker way up the ice on his own to attempt to disrupt the early stages of an entry attempt, Cassidy wants the puck carrier to sacrifice himself by giving the puck up as the forechecker approaches, allowing his teammates to try and enter 4-on-3 instead of 5-on-4.

Some coaches have a specific plan for all five players in the breakout which leads them unwilling to take one player out of the picture. Cassidy’s plans are a bit more adaptable with the belief that seven players rushing into the zone will offer more space than nine.

Finally, we get to the entry style Cassidy prefers.

More than 60% of the entries Cassidy’s power plays attempt include a puck carrier heading up the center of the ice with players to both his left and right, the “outside speed,” steaming past him towards the zone. The other two players typically “post” (fancy word for stand still) near the blue line to create lanes for the outside speed players. As the puck crosses the blue lines, if the killer challenges the puck-carrier, he kicks it out to the posted player just across the blue line. If the initial carrier has a lane to enter, he carries it in himself. Here’s what it looks like on the grease board. 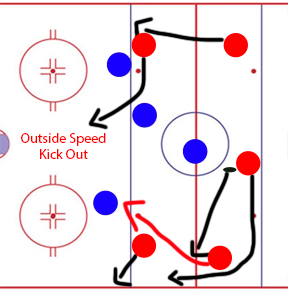 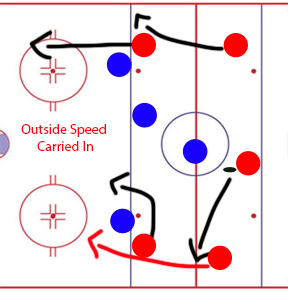 Once inside the zone, the puck carrier has five options. #1 is to drive to the goal and shoot while 2 through 5 are passes. In both instances in this example, Option 5 is the correct choice. 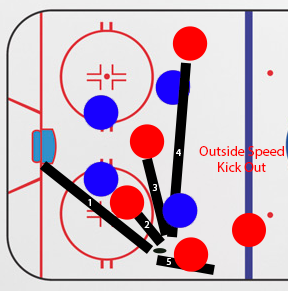 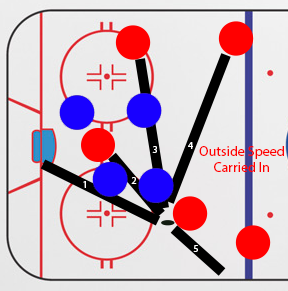 Assuming the puck carrier makes the right decision, the entry is either already set up or a pass away.

This isn’t to say it’s the only entry system Cassidy deploys. In fact, it’s definitely not. He uses the drop pass, which he calls the “delay” from time to time. However, unlike what we saw from Pete DeBoer’s system, Cassidy encourages the initial puck carrier to look to enter the zone straight away as opposed to dropping it if the option is there.

Another entry Cassidy uses from time to time is the “indirect” entry. This is where the puck is shot in behind an aggressive penalty kill that is standing up at the blue line. Not only does this offer an avenue into the zone, but it also backs the killers off on the next entry chance.

In the presentation, Cassidy says he uses the delay about 15% of the time and uses the indirect method only when the opposing penalty kill forces it to be an option.

All in all, Cassidy’s power play system allows for a bit of diversity in entry but for the most part, it’s built off “outside speed.” Scouting gives clues as to what minor tweaks may need to be made and those are implemented on a game-to-game basis.

But as he says multiple times, in the end, it comes down to execution. The system sets up a play that will always allow a player to have an outlet, it’s up to the player to make the right decision.

In part two of the series we look at the in-zone setup Cassidy prefers and how he demands movement of either the puck or players to stretch apart a penalty kill unit.