Following a season in which the Golden Knights had 12 players hit career highs in points, 10 set career highs in goals, and as a team made a run to the Stanley Cup Final you would think individuals from one of the best story in sports would start getting some recognition. 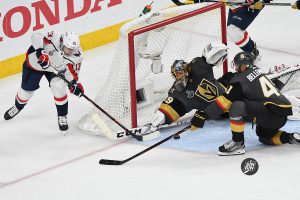 No respect at all I tell ya. (Photo Credit: SinBin.vegas Photographer Brandon Andreasen)

The geniuses at EA Sports don’t agree. They released their top 50 ranked players for the upcoming NHL 19 game, and there’s not a single Golden Knight to be found.

No William Karlsson, who finished 10th in MVP voting. No Jonathan Marchessault, who scored eight goals and tallied more than a point per game in the postseason. No Nate Schmidt, who was the key cog in helping the Golden Knights stifle the Kings, Sharks, and Jets in succession. And worst of all, no Marc-Andre Fleury, a three-time Stanley Cup winner, that put together the best season of his career and carried an expansion team to the Final.

The game drops on September 14th, when we’ll learn the ratings of all Vegas players, but until then, we leave you with the one Golden Knight who did have his NHL 19 rating revealed.

Guess I won’t be using myself again this year for Ultimate Team but I’m still excited for NHL 19! What does everyone else think of my rating? #NHL19Ratings @EASPORTSNHL pic.twitter.com/CEfQ2XnZhx

You’re not alone Nick, the disrespect for the Western Conference Champions is real.

DeBoer was asked about the role Peyton Krebs is expected to play the rest of the regular season and if he's potentially an option in the playoffs. This was his quite telling answer...

Max Pacioretty is out again tonight, per DeBoer.

DeBoer says Reaves is getting close and he anticipates that he will be ready for the playoffs.

Nashville's superstar defenseman Roman Josi with some kind words about Shea Theodore in this week's 31 Thoughts. (Stick tap to @FriedgeHNIC for making that Thought #27.)

Krebs says he thought the pass to Tuch that led to his first NHL assist was actually offside. He celebrated anyway and then was excited when he saw the replay to see it was indeed a good goal.