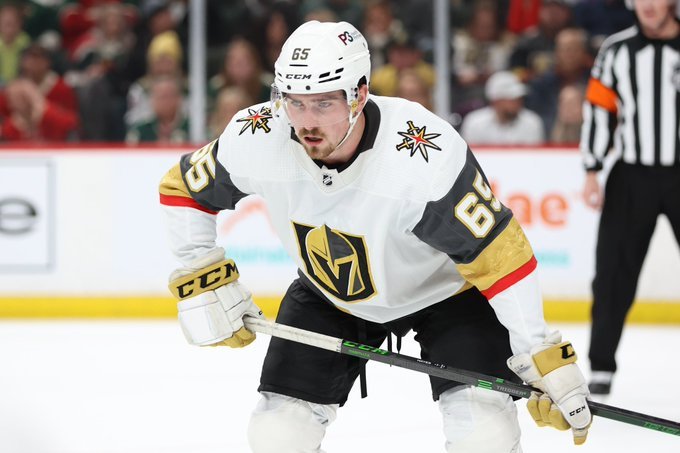 At this point in his hockey career Zack Hayes is probably used to being overlooked. A 9th round pick in the WHL bantam draft, Hayes played 272 games over five seasons with the Prince Albert Raiders. Despite being eligible multiple times, Hayes went undrafted in the NHL Draft.

In 2019, he was invited to participate in Development Camp with the Anaheim Ducks where he actually played in a game against Golden Knights prospects. That camp came and went, and he remained unsigned as he returned to Price Albert.

Then, finally, on April 6th, 2020 Hayes was offered his first professional contract, an AHL deal with the Silver Knights. He worked his way into a three-year entry level deal with Vegas and as recently as this preseason appeared to be on track to be one of the first defensemen called up if/when the Golden Knights needed one.

That time came quickly for Vegas, needing a D-man in the fifth game of the season. The selection was Daniil Miromanov, not Zack Hayes. As the season wore on, the Golden Knights needed player after player but they called up Kaedan Korczak, Brayden Pachal, and Derrick Pouliot, and still not Hayes.

It had to start feeling like his time would never come.

Then, out of nowhere, it did.

I was just sitting on the bus waiting, getting comfortable for the five hour bus trip to San Diego. I knew Miro(manov), Paul (Cotter) and Ronny (Rondbjerg) got called up so they were driving to the airport right away and all of a sudden Andrew Doty (HSK video coach) comes on the bus and he’s like ‘you’ve got to go, you’ve got to go get your stuff right now.’ -Hayes

So, Hayes rushed off the bus, grabbed his gear from the team trailer, and waited outside of Lifeguard Arena, the Silver Knights’ practice facility, for his ride to take him to the airport.

It was a cool experience because all the guys were on the bus and I got the standing ovation as I was walking off the bus. -Hayes

His ride came in the form of Henderson head coach Manny Viveiros pickup truck which was already taking Miromanov, Cotter, and Rondbjerg to the airport and had to turn around to go back and grab Hayes.

The flight took off from Vegas at around noon Pacific time which had Hayes and his teammates landing in Minnesota at about 5:45 Central.

He hopped off the plane and was told at 5:50 that not only was he here for the Golden Knights’ game against the Wild, but that he’d be in the lineup, making his NHL debut. They rushed to Xcel Energy Center.

I was a little late for warmups there. I struggled to get my socks on and my shoulder pads might have been on backwards. I was just trying to get everything on as fast as I could to get out there. -Hayes

Typically when a player hits the ice for their NHL debut, the rest of the team stays back and lets them skate the customary “Rookie Hot Lap,” but Hayes literally missed the start of warmups so that had to wait until the next night in Winnipeg.

After warmups, Hayes had a five minute chat with the Golden Knights’ coaching staff to go over the game plan and then less than 90 minutes from landing in the State of Hockey, Hayes stepped on the ice to play the biggest game of his life.

I was able to soak it in because I didn’t really know what was going in so I was able to enjoy the moment. -Hayes

Hayes played 9:22, attempted one shot on goal, and racked up a team-high six hits in his first career NHL game. He backed that up with a 10 minute performance against the Jets a night later and is expected to be in the lineup again tonight against the Predators.

The day leading up to it was a little different but yeah (my first game) was just how I imagined it. It was a little bit of a gong show but I’ll take it.  -Hayes