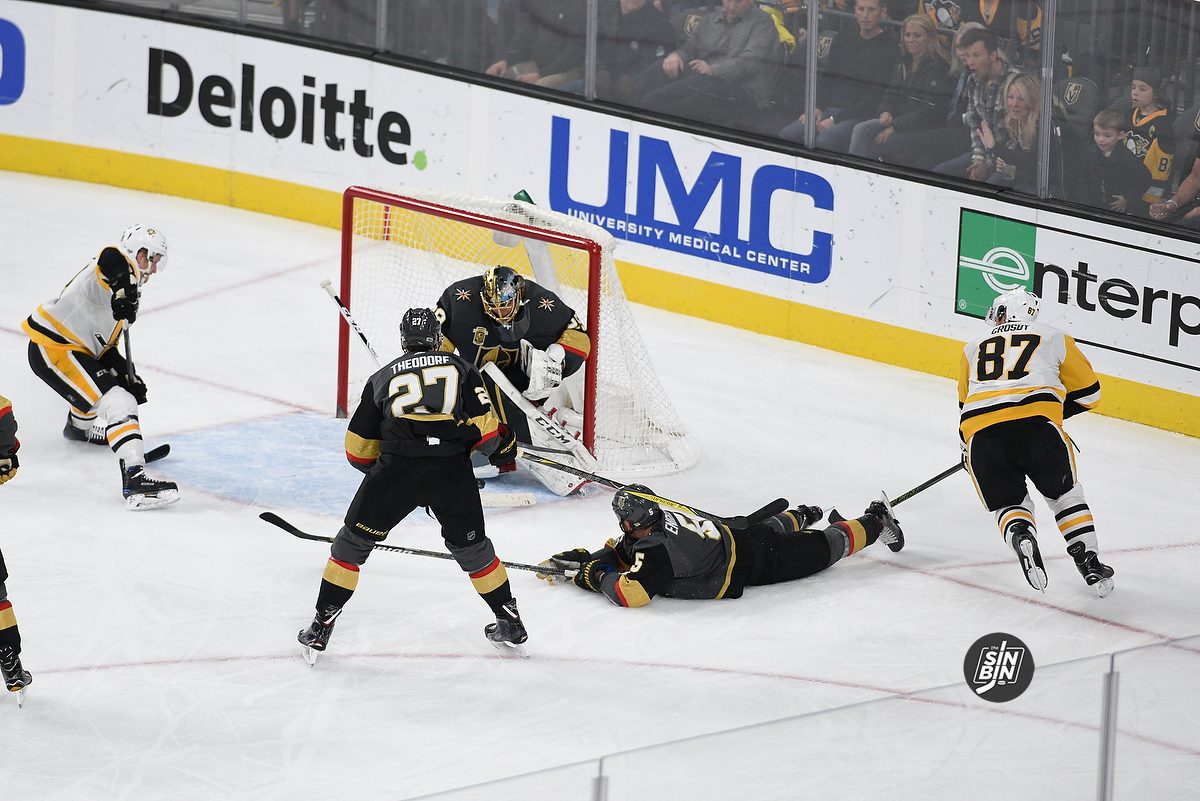 Theodore, Merrill, and the VGK defense were superb against Pittsburgh. Can they do it again to an even higher powered attack? (Photo Credit: SinBin.vegas Photographer Brandon Andreasen)

It’s a question being asked all around the league and very few have the answers. We chatted with young Golden Knights defensemen Shea Theodore and Jon Merrill to get their thoughts on shutting down Tampa’s high-scoring offense.

When you have teams that come in with strong players, you have to keep it simple and zone in on those guys. Sometimes when you give them too much respect, that’s when they’re at their most dangerous. As a d-man that’s when your gap starts to slide and you’re doing too much watching. -Shea Theodore

It’s no secret the Lightning’s top line is lethal. Steven Stamkos, Nikita Kucherov, and Vladislav Namestnikov have scored 48 goals as a top unit. To compare, the Golden Knights top line has a combined 35 goals. Theodore believes the Golden Knights defense is getting comfortable with defensive challenges.

As you play more and more games you get more comfortable playing with those kind of players. For example, the game against Pittsburgh I thought me and Engo were matched against Crosby all night and we did a good job shutting him down. We tried to eliminate as many scoring chances as we could and I felt like we did a good job. -Theodore

Will Vegas defensemen change their strategy and play more conservative against Tampa?

There’s times when they want us to keep the puck in the zone and make those smart pinches when we do have support. When you play those teams the longer they play in the d-zone the more frustrated they’re going to get. We’re a good team and they should definitely respect us as well. -Theodore

As great as the top line has been, maybe the biggest reason for the Lightning’s success is their offensive depth (this should sound familiar to Golden Knights fans). Second line skaters Brayden Point, Ondrej Palat, and Tyler Johnson have generated 29 tallies, and Tampa’s third line notched 21 goals.

KISS method: Keep it simple stupid. That’s what they always told me growing up.

I don’t think there is any specific recipe to shut them down. They are high end players, you just try and limit their time and space. We have to try and not worry about who they have in their lineup and worry more about our game. -Merrill

Overall, there’s a good chance Tampa will get on the board tonight. The Bolts lead the league with 123 goals this season. It’ll be up to the Golden Knights defense to limit Tampa’s scoring opportunities. As Theodore said, heavy possession in Tampa’s zone could frustrate the league’s best offense, but for VGK that’s easier said than done. Vegas defense will be their ticket to success. Excellent positioning, smart decision making, and treating the puck like it’s their 90-year-old grandmother when it’s in their own end, with extra special care. If the Golden Knights turn the puck over behind their own blue line consistently, they’re toast, but if they don’t, the Lightning actually may be a favorable matchup for our boys.

They believe they can do it, but of course they do, they’re be feeling confident right now, they did just shut down Sid.