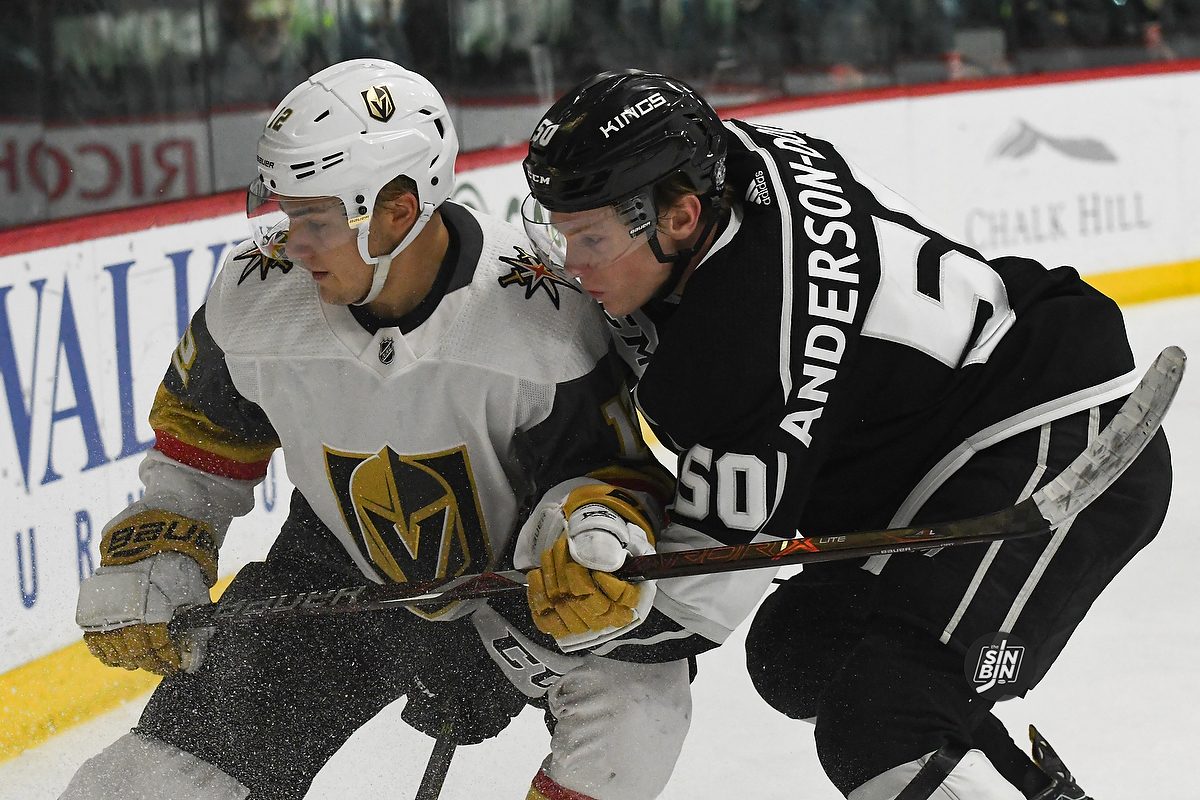 Time for a new excuse as to why this kid isn’t in the NHL yet. (Photo Credit: SinBin.vegas Photographer Brandon Andreasen)

The Golden Knights have a player that fits the same mold, his name is Erik Brannstrom. In his first 14 games in the AHL, Brannstrom has recorded 12 points including three goals and has only failed to record a point in four of those 14 games. Yet still, he has yet to get the call from George McPhee and many still use the phrase “too small” as a reason for him to keep “cooking” in the minor league.

Chicago head coach Rocky Thompson joined the SinBin.vegas Podcast to chat a bit about Brannstrom, as well as a few other Wolves and his aggressive pulling of the goalie techniques. (The whole interview can be found at the end of this article) I asked him, point blank, if Brannstrom’s smaller frame has cropped up as an issue, specifically while defending in his own end.

Not at all actually. He’s not going to be a bully in our own end… but he can break cycles, he just breaks it in a different way. He’s been really really coachable. He’s +4, he’s very rarely when we log our chances against, the cause of the chance against. -Rocky Thompson, Chicago Wolves head coach

His ability, once he does interrupt a cycle to transition with the puck and to get out of our own (is great). Sometimes the best way to defend is to not defend overly long, so when he is forced into those situations he’s really made huge steps in how he plays those and being able to interrupt those and that does translate to the next level. -Thompson

On the flip side, Brannstrom has been on the ice for 40.8% of the Wolves goals, 20 of 49. Thompson says he’s even coming along on some of the offensive areas the team has wanted him to work on.

I think he’s done a great job moving the puck, he skates well with the puck, we’re starting to get him to activate more into the offensive side when he doesn’t have the puck. He’s very offensive minded when he has the puck and then he kinda sits back a little bit when the puck is passed off into the forwards’ hands. Well we want him to be very aggressive in those scenarios as well, at the right times of course, and I think he’s starting to make those reads. -Thompson

You can listen to the entire interview, but there’s not a word in it pointing to why Brannstrom doesn’t belong in the NHL right now.

All I know is I’m really excited about him and every day he’s getting better and that’s encouraging. When he gets his opportunity to play at the next level he’s going to be able to seize it and not just play there but make a home in the NHL and be an impact. -Thompson

Nonetheless, we wait. Maybe the Golden Knights don’t want to burn a year of his contract. Maybe they are waiting until after Word Juniors in late December. Maybe they just have a stubborn GM who is sticking to his belief that teenagers don’t belong in the NHL. We’ll probably never know the real answer.

The Golden Knights could use some help scoring from the blueline (7 goals in 23 games) and Erik Brannstrom may or may not provide it, but one thing we do know is that he can’t help  Vegas, while riding the bus from Rockford to Des Moines.