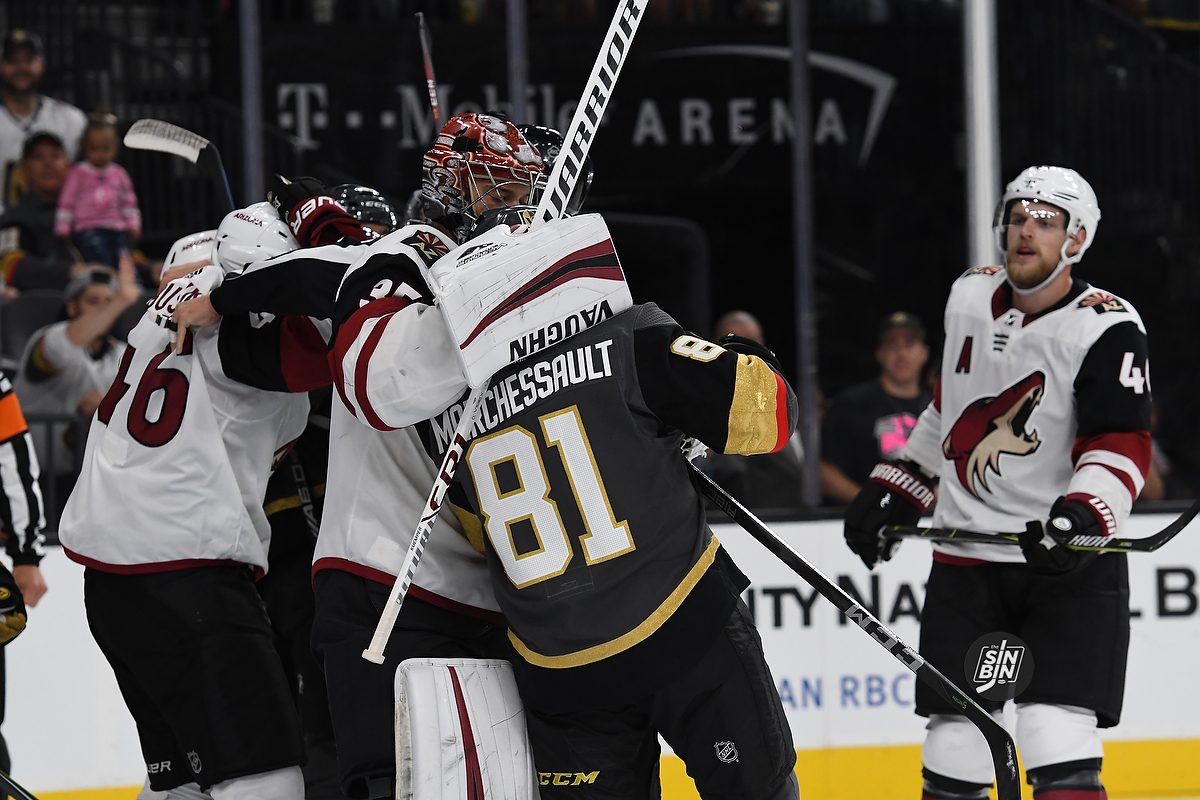 The world’s greatest sportsbook, and the only sportsbook in the history of the NHL to strike a deal with a franchise, William Hill, has released a bunch of props on the Vegas Golden Knights. Not only do they have the standard “futures” which allow fans to bet on the Golden Knights to win the Western Conference or Stanley Cup, but they’ve now posted individual player props for Vegas players as well.

But rather than just post them, I decided to have a little fun today and actually make picks on them. Plus, at the end of each pick, a confidence level of how certain I am that my pick will be correct. Here we go!

Pick: Over
This number is pretty spot on to where I expect Karlsson to land this year so it’s actually one of the toughest ones of the group. When we wrote the “Karlsson regression” article the number it spit out was 34.3 goals, so for that alone, I’ll go with the over. I fully expect the Golden Knights top line to once again dominate games on both ends of the rink, and I expect Karlsson to be a major factor in that. However, I think Marchessault is ready to take the step into being the 40+ goal guy while Karlsson will pick up his assist total instead.
Confidence: 2 out of 5

Pick: Under
The Golden Knights had just one 30 goal scorer a year ago. That number may rise to two or three, but I can’t say I’m positive Pacioretty will be one of them. That’s not to say I don’t expect Max to have a great year with the Golden Knights, it’s just that 32 goals is a lot to ask, especially when he doesn’t have a clear line to play with out of the gate. He’ll certainly be paired with Paul Stastny, but it might be a revolving door as the third man on that line which will stunt production a bit. Also, Pacioretty and Stastny were brought to Vegas to sure up the defense on the 2nd line. That’ll be as much a focus as scoring, and no one on the 2nd line scored 30 a year ago.
Confidence: 3 out of 5

Pick: Over
This is the easiest of all of them for me. Marchessault should soar past 30 playing an entire season with Karlsson, Smith, and as a focal point on the power play. As mentioned in the Karlsson pick, I expect a lot of the goals from the first line to shift from Karlsson to Marchessault. Honestly, it wouldn’t surprise me in the least if Marchessault ends up closer to 50 than he does 29.5.
Confidence: 5 out of 5


Pick: Under
Last year, in a year where the first line was arguably the best line in hockey, Smith wound up with 60 points on 22 goals and 38 assists. (He did miss 15 games) If he matches those numbers exactly, he will have had another amazing year. I could see the first line scoring a tad fewer goals this season which would take away some of the assists from Smith. The book appears to be expecting everyone on the first line to progress where conventional wisdom expects them to regress (at least a bit). I expect regression in numbers but continued dominance of play. So, Smith gets an under here but remains one of the most important players on the team, if not the most important.
Confidence: 4 out of 5

Pick: Under
The next two are subject to each other. If Haula plays 82 games with Pacioretty and Stastny, he’ll fly over 48.5 points. Same goes for Tuch. Heck, if the two of them play together on a line, they both may soar past 48.5. However, while I expect Haula to get the first chance on the second line, eventually I think it’ll be Tuch’s spot for the balance of the season. Therefore, Haula will be on a line with guys like Cody Eakin, Ryan Carpenter, Tomas Nosek, and others and will have to generate most of the offense himself. I believe he can generate some, but not 49 points worth if he’s not on the second line.
Confidence: 3 out of 5

Pick: Over
Again, because I expect Tuch to get the eventual call as the second line winger with Stastny and Pacioretty, I think he should have no problem reaching 50 points. If however, Haula does well out of the gate, Tuch’s chance may never come and 50 will look like a huge number for a third line winger.
Confidence: 3 out of 5

Pick: Over
Fleury had 29 wins a year ago and missed almost half the season. Even if he regresses majorly, as long as he’s on the ice he should get to 30 with ease. I could see him hitting 30 before February is over if things go the way they probably should. At this point I still can’t see Subban stealing too many games from him, so as long as there’s not another unfortunate injury, Fleury should be in the net for at least 60 games, if he can’t win half of them, the Golden Knights are in trouble.
Confidence: 5 out of 5

Picks: Over & Yes
I’ve got the Golden Knights at 105 points, finishing in 2nd place in the Pacific Divison (1 point behind Arizona, yeah Arizona, if anyone cares). Making the playoffs shouldn’t be too tall of a task for this team, especially playing in the Pacific. LA, Anaheim, and Vancouver should all be out of the playoffs leaving five teams to compete for three guaranteed spots and potentially a fourth with the wild card. I expect the Golden Knights to once again start the season quickly, but hit a few more rough patches than they did a year ago. Things won’t go quite as swimmingly and it won’t be a “matter of time” before they clinch a playoff berth, but they should be in the playoff picture for a majority of the season.
Confidence (Points): 3 out of 5
Confidence (Playoffs): 5 out of 5