Wild Continue To Give Life To Opportunistic Golden Knights 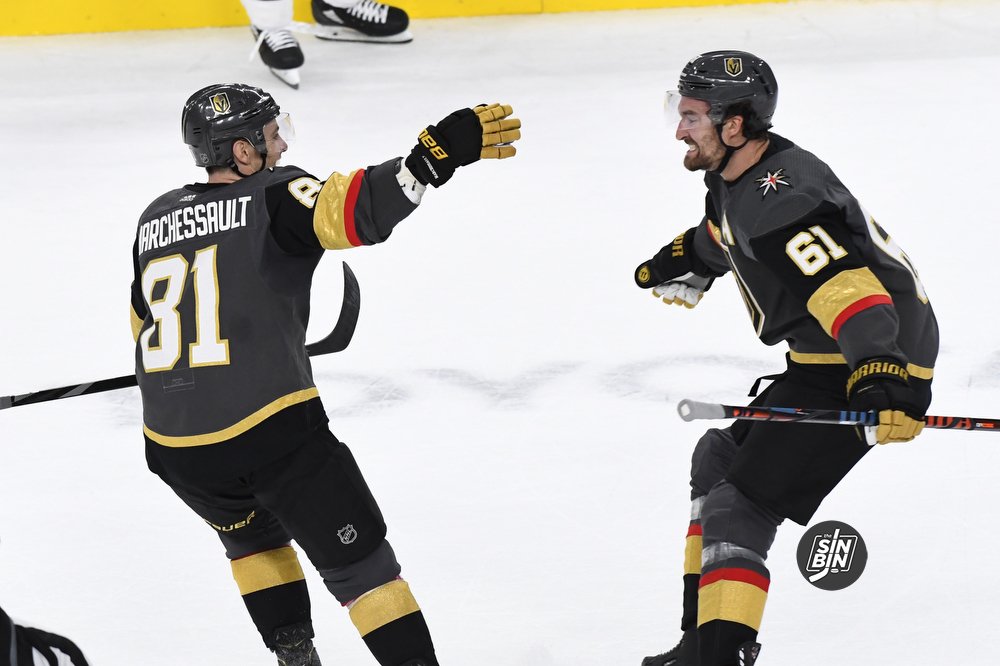 Most Golden Knights fans were ready to turn off their TVs after the opening 20 minutes of Game 3. For a second straight game, the Minnesota Wild outshot and outworked Vegas earning a 2-0 1st period lead. However, a two-goal lead wasn’t enough to put the Golden Knights away.

The final results came down to open opportunities and Vegas’ ability to jump on them.

They came out to a quick start. They were faster than us to a lot of loose pucks. I think that’s what gave them so many opportunities. We have to try and turn that around as quickly as possible because we don’t have a chance. We’re a fast team but if we’re not playing fast we’re just waiting for them to score. -Reilly Smith during 1st Intermission of Game 3

It’s obvious when the tide turned last night. When it looked like the Wild would take a commanding 3-0 lead, coach Pete DeBoer made a wise challenge that paid off instantly. Not only did Minnesota have a goal taken away but it gave Vegas a sudden moment of hope. That’s when the visiting team realized they weren’t down and out despite trailing 2-0. The challenge was the first opportunity and it woke up Vegas. Holding the Wild to only two in the first period changed the direction for the Golden Knights.

The 2nd period was filled with more opportunities for Vegas.

The Wild widened the door last night when they failed to make it a three-score game and couldn’t stay on the ice in crucial moments. Special teams in the postseason isn’t only about scoring or stoping the puck. They change the flow of the game and in turn which players are being utilized when. The Wild have penalty killers throughout their lineup, so when they are forced to kill off multiple power plays, they can’t roll their lines and create matchup problems for the Golden Knights. Compounding the problem, Wild forward Marcus Johansson left the game in the 1st period with a broken arm leaving a unit that relies on depth one man short.

We were sustained in there and they’re moving the puck and we’re working. Those are hard minutes. Even the guys that aren’t on it are sitting there and so the rhythm of the game, we got out of it. We clearly got to stay out of the box. -Evason, MIN coach

Another chance that the Golden Knights took advantage of was the building frustration from the Wild. Minnesota players Kevin Fiala and Ryan Hartman had several dangerous chances but could slip one past Marc-Andre Fleury. That threw off the Wild in the 3rd and caused offensive disarray. When the game clock expired, the Wild had only mustered up four final period shots. That allowed Vegas to play cleaner and safer down the stretch.

Jumping on certain moments during a game wasn’t just unique to last night. Visiting coaches all season long commented on how Vegas is a team that feasts on opponents’ mistakes. In Game 2, the Golden Knights picked up a big push from Jonathan Marchessault’s game-tying goal that caught the Wild off guard. It was the team’s first score of the series and the confidence was unleashed. Late in the game when Minnesota was pushing, star Kirill Kaprizov committed a tripping penalty ending their 6-on-5 advantage. Vegas drew the penalty and made it easier to run out the clock.

Through three games Minnesota has proven itself as a worthy opponent. They pulled off a gutsy Game 1 victory on the road, and had fast starts to Game 2 and 3. On the other hand, Vegas hasn’t looked particularly impressive aside from one dominant period yet they lead the seven-game series 2-1 and have reclaimed home-ice advantage.

If trends continue the right way, the Golden Knights should advance as long as they continue to be opportunistic.