On Sunday afternoon the Golden Knights were in a situation they’ve admittedly found themselves in too often this year. Down a goal late, Pete DeBoer called Laurent Brossoit to the bench with just under two minutes left in an attempt to score the game-tying goal.

For the sixth time this year, the Golden Knights found the back of the net with their goalie on the bench and a sixth skater on the ice. That’s the fourth most of any team in the NHL this year and ties most by a Golden Knights team in a season ever.

In fact, in just 35 games, the Golden Knights have scored more goals with their net empty than they did in the last 100 regular season games.

The question becomes, why?

We’ll start with the coach-speak answer, but one that certainly has quite a bit of validity.

There’s never any panic with our group in those situations, there’s a calmness which you need. If you are running around trying to make something happen you can’t enter with possession. You’ve got to have a calmness to your group to get organized, to get set up, and to know that we’re getting the goalie out early enough that the clock is our friend, and we don’t have to rush or force anything. I think our guys get that concept. -DeBoer

Along with calmness, there’s definitely a sense of belief that shines through. As DeBoer says, panic rarely, if ever, sets in, which allows the Golden Knights to continue stacking up chances until one goes in.

As for the player reasoning, it’s a bit more specific.

We’ve talked about a few things systematically that have worked. From up top we are setting up with good shooting opportunities for me and Theodore and whoever else is at the top with us whether it’s Pacioretty or Marchessault or whoever. And if you look at all the success we’ve had at 6-on-5, it’s because we have guys standing in front of the net. You’ve got two people in front and us shooting up top it’s obviously pretty difficult for the goalie to see it. Also, you want to create those scrums so you can get those second opportunities because you have the extra guy out there. -Pietrangelo

If you look at a still frame from the shot that led to the goal on Sunday, it’s pretty clear what he’s is talking about. 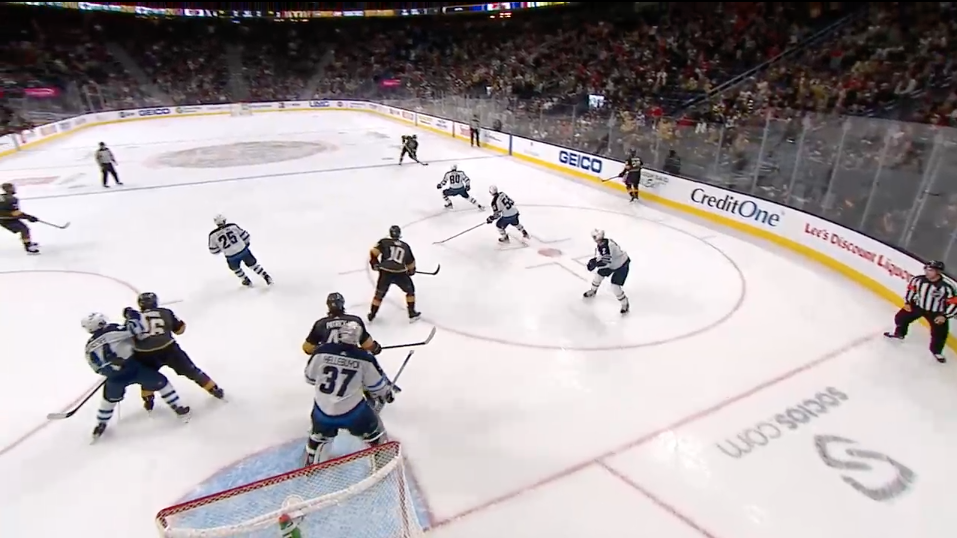 There are actually three players down around the goalie and two of them are directly in the Connor Hellebuyck’s sightline of the puck.

Another reason the Golden Knights have had this much success is their ability to re-enter the zone with their own net empty. Just in the final 100 seconds of the game, Vegas was able to enter the zone successfully three times with the net pulled. There have been two main principles that have helped them in this area.

First, with the extra man, they commit numbers to board battles which usually leads to either Vegas winning the puck, or a hopeless clearance attempt from the opponent. Second, the Golden Knights have been strong at keeping pucks in the zone at the blue line. Both Theodore and Pietrangelo have quick enough hands to settle the puck and then move it before the pressure arrives.

Because of both, this has allowed the Golden Knights tons of zone time that other teams (and VGK teams of the past) have not enjoyed with their own net empty.

When I asked both DeBoer and Pietrangelo about the success though, both went to the same place fairly quickly in speaking about it.

Unfortunately, we’ve probably been in that situation more than we’ve wanted to which leads to a little bit of confidence. Hopefully we can rectify that and not be in the situations where we have to pull our goalie and have to come back. -DeBoer

Too much experience, I guess, that’s not a good thing. We want to make sure we are not getting in those situations. -Pietrangelo

The objective moving forward will be to stay out of this situation as often as possible. But, if it does come to it, which it will from time to time no matter how well they are playing, being a dominant 6-on-5 team is a dangerous tool to have in the bag.

McCrimmon Gives Update On Eichel, State Of The Team, During Sunday’s Game