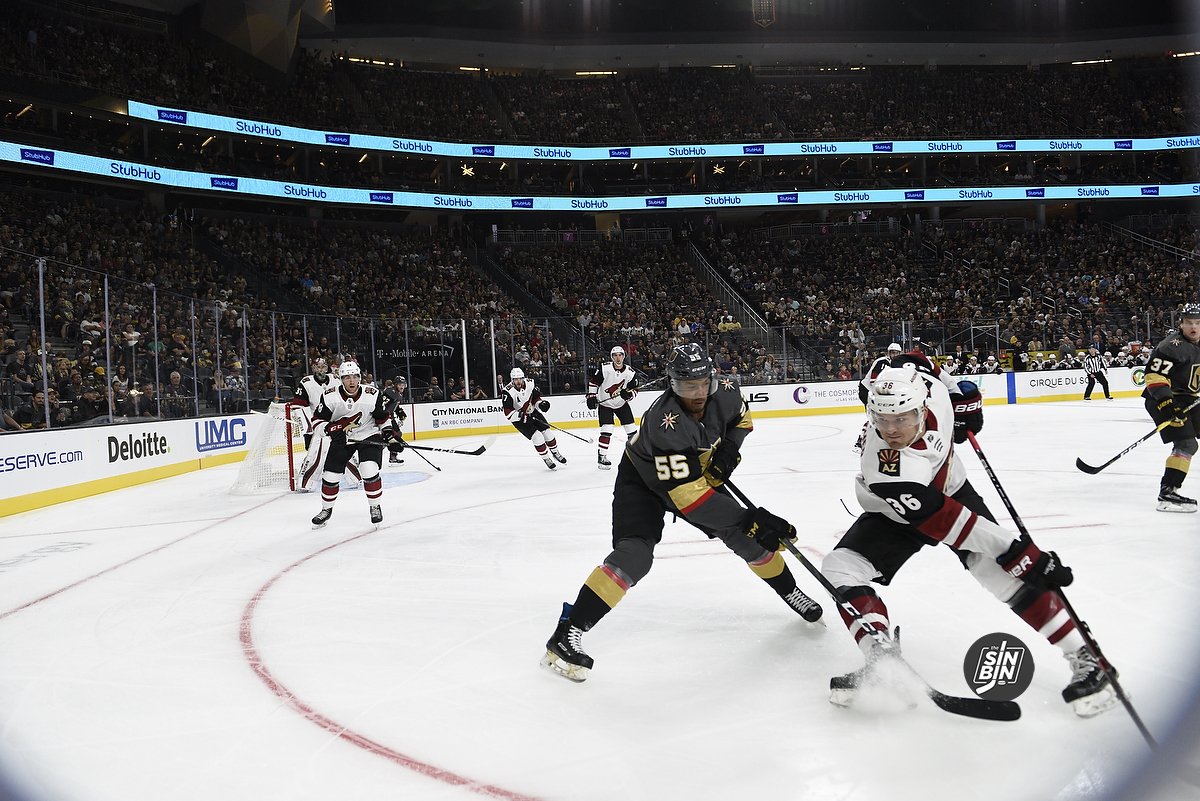 It should have happened for the first two games. Now it’s happening tonight.

I’m talking about the decision to send Cody Glass to the AHL/taxi squad, and thus take him out of the lineup, inserting Nic Hague into the defense, and keeping Keegan Kolesar on the active roster and away from waivers.

Due to the massive offseason move of signing Alex Pietrangelo, the Golden Knights spent every day between the moment they lost to the Stars to Opening Night 2021 over the cap. We knew some “salary cap gymnastics” were going to be necessary to make the team compliant before the first game against the Ducks.

They came on the final day of Training Camp. The Golden Knights waived Nick Holden, risking losing him to another team for nothing, then released a peculiar looking roster of 13 forwards, five defensemen, and two goalies. Vegas went on to play two games voluntarily down a defenseman and pulled out a pair of wins to start the season.

Admittedly, the Golden Knights were not in love with the idea of playing short a d-man, but their willingness to do it proved they believed it was necessary.

Why? While we don’t have an answer to that question on the record, we have a pretty good educated guess. That guess is that the Golden Knights have knowledge that if they placed Keegan Kolesar on waivers he would get claimed by another team.

How do they know this? Again, another educated guess, but GM’s talk to each other often, and the Golden Knights were probably one of the most active teams this offseason trying to maneuver their roster after signing Pietrangelo. Somewhere in one of those conversations, there was likely a clue that another team coveted Kolesar. If someone’s willing to trade for a 23-year-old forward with limited NHL experience and a league minimum contract, they’ll certainly be willing to scoop him up for free if he hits waivers.

So, the Golden Knights avoided it. Now, two games in, they are still trying to avoid it, but the options remain limited.

They could continue with five defensemen, but through two games, the Golden Knights have the two league leaders in average time on ice per game and all five defensemen rank in the top 15 across the entire NHL. For now, that’s fine, but over the course of an entire season (especially one that is as tightly packed as this one), that’s not a viable long-term option.

Or, the Golden Knights could take a forward out of the lineup in order to insert the sixth defenseman in. Of the 20 guys who played in both games so far, there is just one player who is waiver exempt. That player is Cody Glass. (For those who don’t know, that means the Golden Knights can take him off the active roster without risking losing him. Anyone else, they’d have to risk losing that player like they did Nick Holden.)

So, to sum it up, the Golden Knights were left with these three options.

No matter how you view Kolesar, losing him for nothing does the Golden Knights absolutely no good. Sure, he’s played in a limited role and hasn’t exactly excelled in it, but it’s definitely not enough to write him off for the rest of his career. The Golden Knights invested a 2nd round pick via trade in Kolesar and they’ve believed in him ever since. Giving up on him now makes little sense, especially when you consider the small price to pay to avoid it.

The Golden Knights would be better off with Glass in the lineup tonight than Kolesar. But, missing him tonight will probably not have much effect on the game nor will it have any effect on his long-term development in the NHL.

In 2017-18, the Golden Knights used this same strategy with both Alex Tuch and Shea Theodore. They sent each down to the AHL in order to protect Jason Garrison and Griffin Reinhart. In retrosepect, we know neither player would go on to make an impact for the Golden Knights, while the two guys they sent away have. But, looking back, did missing Tuch and Theodore for a few games make any difference at all?

This is a long-term decision that will hinder the team in an incredibly small way in the short-term. It’s a risk-reward driven move and the risk massively outweighs the reward. Missing Cody Glass for a game, or two, or ten pales in comparison to losing a prospect forever, and for that reason, the Golden Knights are making the right decision for future, even if it looks a little odd in the present.

Carp: It’s More Than Just About The Bottom Line