Why Do Fans Hate Nick Holden? 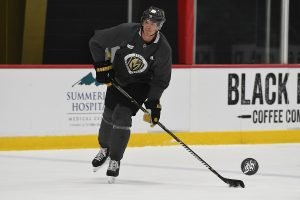 One of the Golden Knights’ major additions this offseason was bringing in defenseman Nick Holden as a free agent. The 6’4″ versatile defenseman has scored 10 goals twice and has tallied 20 or more points three times in his career. He’s responsible defensively and is consistently deployed to start shifts in his own zone (56% career D-Zone Starts).

However, the moment Holden’s signing to Vegas was announced, a barrage of hate was thrown towards the Golden Knights by fans of Holden’s previous teams, the Avalanche, Rangers, and Bruins. Look…

Holden trying to get the puck out of your zone like…. pic.twitter.com/Cs9LkCDzwL

You sure about that?

You will never win a cup now

But why? Why is it pretty much universal when you ask fans what they think of Holden they react negatively? To find the answer, we went straight to the source and asked the man himself, why does everyone hate you?

I think cause I’m not a real flashy guy. I try to do the little things right all the time. I won’t make any real big plays where fans will notice me. They’ll notice when I get scored on and they won’t notice anything else. They won’t notice if I block a shot. Most fans like the offensive guys and the tough guys and I’m neither. -Nick Holden

What Holden does is play good defense. Holden has posted four consecutive seasons with a defensive point share of over 2.5 and registered a 3.9 in each of the 2015-16 and 2016-17 seasons. For reference, only Brayden McNabb (5.0) and Nate Schmidt (4.8) scored over 3.9 for Vegas last year.

I learned a few years ago to not really watch that stuff, it just matters what happens in here (the locker room). -Holden

We’ll see what Vegas fans eventually think of Holden when he hits the ice for the Golden Knights for real. Odds are they’ll hate him too, even though he’s a really good player, just not the right kind of really good player.