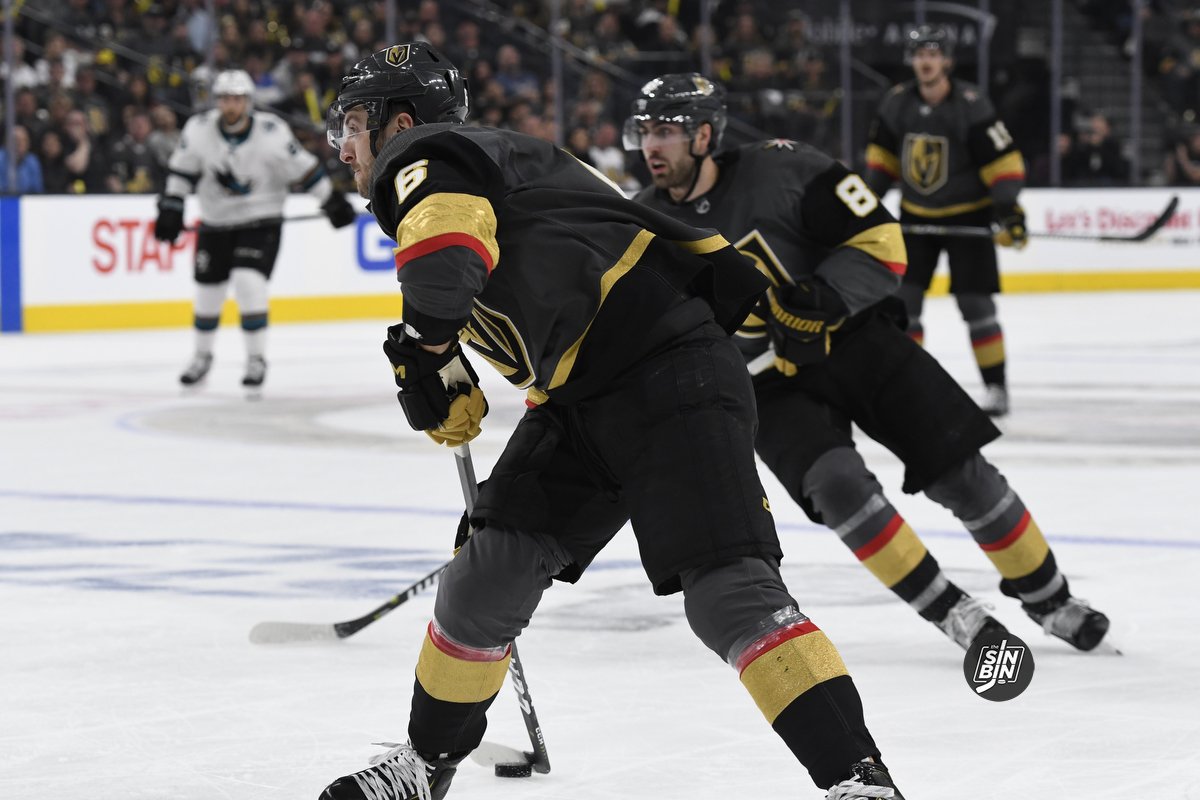 When a series goes seven games, it’s the nature of the beast for the losing team to look back at every play, every call, and every decision to come up with answers as to what went wrong.

Of course, it’s been harped on time and time again that the call on Cody Eakin was blown and it cost the Golden Knights a chance to still be playing today. However, there’s no denying the fact that Vegas lost three other games in the series that could have nullified that gaffe.

In Games 5 and 6, Vegas played well and close games just didn’t fall their way, but Game 1 was a much different story. When the series got underway in San Jose, the Golden Knights seemed to take a moment to really get going. By the time they did, it was too late and they instantly dug themselves a hole in the series they would eventually climb out of, only to fall right back in.

Over the course of the first six games, head coach Gerard Gallant made one lineup change. That was putting Colin Miller, who was scratched in Game 1, back into the lineup for Nick Holden.

It was a peculiar decision to bench Miller in the first place, and one that would only get weirder as questions would later be answered about the lineup move.

Miller played all 102 games last season, 65 of the 82 in the regular season this year, and all of the previous seven heading into playoffs. Also, Miller took part in 13 of the 14 prior meetings between the Sharks and Golden Knights, scoring three goals, putting up five assists, and recording a +4 rating. Vegas won nine of the 13 games Miller played against San Jose and lost the one he didn’t.

This was the reasoning for scratching Miller after Game 1 from the Golden Knights head coach.

That was… Like I told you the other day, we play 20 hockey players and there’s some good players that are not playing tonight so we decided he’s not going to play tonight. -Gallant

Is he healthy? – SinBin.vegas

However, it clearly wasn’t that simple.

Miller took warmups prior to Game 1 against the Sharks. No other player (with the exception of Jimmy Schuldt days after he joined the team) skated in warmups and then didn’t play for the Golden Knights in 2018-19. In 2017-18 it happened only a handful of times and in every instance, it was precautionary to cover for a player who might be injured and unable to play.

As Gallant confirmed, no one was injured. Miller skated alongside the scratches in morning skate the day of Game 1, so the decision was clearly not made in the spur of the moment before the game.

To make matters even more confusing, Miller was instantly placed back in the normal rotation on the off-day between Games 1 and 2. He played in every game the rest of the series, and Gallant made an interesting comment when asked about Miller prior to Game 4.

How can you be disappointed when you made the decision to keep him out of Game 1? It almost seems like Gallant is shifting the blame directly onto Miller. The word “disappointed” makes it sound like the choice was out of Gallant’s hands.

We’re not going to speculate on the exacts, but it didn’t make sense at the time, it continued to not make sense throughout the whole series, and it still doesn’t make sense now that the Golden Knights season is over.

We’ll likely never get the answer as to what exactly happened, but that doesn’t mean it’s insignificant moving forward.

The Golden Knights have a logjam on the blueline heading into the 2019-20 season. They have at least 10 defensemen who are capable of playing in the NHL, and that’s not counting upcoming UFA Deryk Engelland. George McPhee and Kelly McCrimmon are going to have to do something to open up some roster spots on their back line.

Colin Miller’s name probably shouldn’t be a part of those plans though. He’s unique to the Golden Knights. No one has his shot, no one offers the threat from the point like he does, heck hardly anyone even uses the hand he does to shoot with (Miller is the only right-handed defenseman of the six NHLers under contract). Plus, he showed the ability to be more than just an offensive weapon during Nate Schmidt’s 20 game suspension.

But, we’re also now talking about a player that was scratched from the most important game of the season (at the time) because of “the way he gets ready mentally.” That game was one the Golden Knights lost, and can easily be pointed to as the difference in an otherwise razor thin series.

No one knows what may have happened had he played in Game 1. Only a select few know what happened to keep him out of that game, and even a smaller group know what his future holds in Las Vegas. But, no matter how you slice it, the story behind the Game 1 scratch will figure into his future one way or the other.

At some point, we’ll figure out how. Until then, all we can do is read into what was said and wonder what might have been.