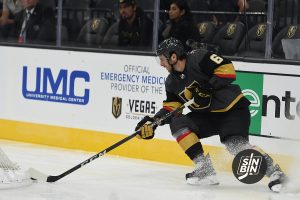 Only five players average more than 2:00 minutes per game killing penalties. It’s fairly obvious who Gallant trusts on a nightly basis. Gallant puts a lot of stock into the importance of penalty killing. It’s one of the more important issues that factor into lineup decisions and healthy scratches. If a guy puts up a bunch of PK time, he’ll likely to be in the lineup consistently or be replaced by someone who will gobble up that same PK time.

Power Play minutes are a little more distributed. Vegas is 11th in the league with 91 power-play opportunities. They’re 17th in the NHL with 17 PP goals scored. Ten players have amassed at least 45:00 (PPTOI) total minutes of PP time this season. Colin Miller is a PP machine, leading all VGK players with 79:18 total PPTOI. William Karlsson is next, skating a total of 74:58 man-advantage minutes.

When it comes to average PP minutes, 12 Golden Knights play more than 2:00 minutes per game. There’s a big drop after that, Eakin is next averaging 1:05 a game. Expect Theodore’s minutes per game to go up and Schmidt’s average PPTOI to decrease.