Who Are The 2020 Chicago Blackhawks? A Quick Blurb On Every Player 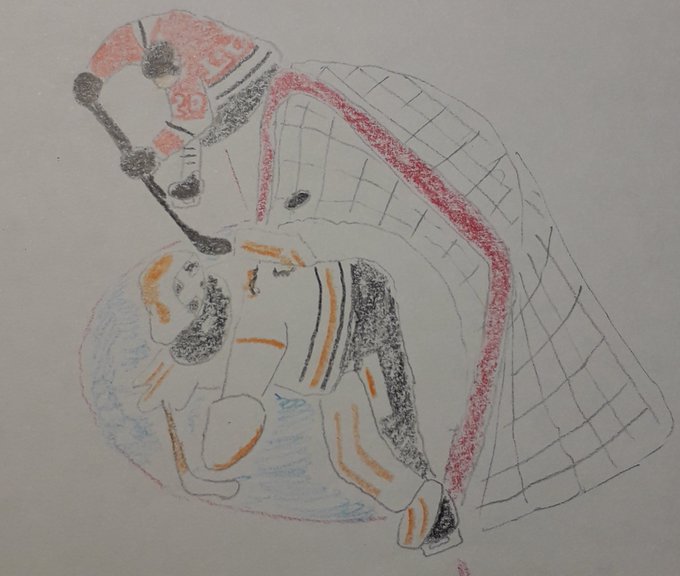 The Golden Knights’ first round opponent is the Chicago Blackhawks. Despite being bolstered by multiple players who have hoisted three Stanley Cups, the Blackhawks are the youngest team remaining in the playoffs at an average age of 26 (VGK is nearly 29).

You probably know the names Patrick Kane, Jonathan Toews, Duncan Keith, and Corey Crawford but it’s guys like Kirby Dach, Adam Boqvist, and Dominik Kubalik who will have just as much impact on the series as the Hawks superstars.

With a little help (he literally wrote the whole thing) from Mario Tirabassi of the Blackhawks podcast “Mario on Hockey,” here’s a quick rundown of every player in Chicago’s lineup.

**Check out the latest episode of Mario on Hockey featuring me. Don’t worry, I picked VGK in 5 even on the Blackhawk centric podcast.**

Jonathan Toews – The player with possibly the most fitting nickname in all of hockey, “Captain Serious” has seen a rejuvenation in his game over the past two seasons and his performance in the Qualifying Round against the Oilers was a reminder that when the lights are brightest, the guy shows up.

Patrick Kane – Still one of the most talented players in the league offensively. Nearly on a 100-point pace during the regular season, much of the Blackhawks’ successes this season were because of him. He was “quiet” in the Qualifying Round with one goal and three assists, but still facilitated much of Chicago’s attack.

Kirby Dach – A rookie, technically, Dach has improved his game so much over the course of this season that he is now trusted with anchoring the Blackhawks’ second-line with Patrick Kane and Alex DeBrincat. His size, speed, and vision for the game are still developing, but he is quickly becoming a key factor for Chicago.

Alex DeBrincat – He didn’t record a goal during the Qualifying Round, but his shot is his most effective weapon in his arsenal. Has a habit of being invisible, not in a good way, at times. But when he’s on, he can cause problems.

Brandon Saad – His return to the Blackhawks over the past two-plus seasons has been a roller-coaster. Still counted on as a key player in all situations, Saad hasn’t shown consistently that he can be the game-breaker he showed during Chicago’s 2013 and 2015 Stanley Cup runs.

Dominik Kubalik – What a steal for Chicago. Acquired for a new soda machine and a bag of pucks, Kubalik has developed into a key piece to the Blackhawks’ success this season. He’s going to finish third in voting for the Calder Trophy, but his 30-goal season is nothing to scoff at. He’s dangerous on the powerplay with a cannon of a shot.

Dylan Strome – Much like Saad, Strome’s tenure with the Blackhawks has seen better days. He’s been moved from his second-line position between Kane and DeBrincat, into a third-line role with Alex Nylander and Drake Caggiula. Strome still needs to take more charge offensively, usually deferring to a pass when he should shoot. Not a great skater and not the best at the faceoff dot, but has talent in his hands.

Alex Nylander – Inconsistency and invisibility on the ice plague Nylander. Far from the talent level of his older brother William, Alex has been given a lot of chances to succeed and has produced little with them for Chicago. He has talent, skates well, but is too easy to defend against and keep on the perimeter on offense.

Ryan Carpenter – Golden Knights fans will remember Carpenter. His one season in Chicago has turned him into a cult-favorite among fans. Not flashy, but does the little things that can put teams over the top. Plays a lot of hard minutes on the penalty-kill and is usually tasked with playing against the opponents’ best players.

Matthew Highmore – Much like Carpenter, Highmore has developed into the kind of fourth-line forward that teams love to have. He brings energy offensively and is used to defend the top opposition. He stood out in the Qualifying Round with a pair of very timely goals.

David Kampf – Paired with Carpenter and Highmore for most of the season on the fourth-line, Kampf anchors the Blackhawks “shutdown” line. He doesn’t do a ton that jumps off the page, but is used a lot on the penalty-kill. A run of the mill fourth center in the NHL.

Drake Caggiula – Caggiula plays on the edge and brings a lot of versatility to the Chicago lineup. At times this season, he played on the top line, but mostly he has been used in the bottom-six for the Blackhawks. He’s an agitator with a touch of skill in his hands. The Blackhawks lost their only game against Edmonton in the Qualifying Round when Caggiula was out of the lineup (suspended).

Duncan Keith – Still the workhorse of the Blackhawks defense. He plays in all situations and is still asked to do a lot of the heavy-lifting at 37 years old. He’s been paired with rookie Adam Boqvist mostly this season, which can account for his lower statistical numbers this season, having to defend more to cover for Boqvist. Still a player any team would love to have in their defensive group.

Adam Boqvist – May have been rushed into the NHL, but he has been able to keep his head above water this season. He’s not Erik Karlsson 2.0 just yet, but he skates well and has some flair to his offensive game. Still learning the speed and physicality of the NHL, he can be caught out of position with some regularity and can be out-bodied in front of the net.

Calvin de Haan – Thought to be done for the season a few months ago, Blackhawks fans rejoiced learning that de Haan would be able to rejoin the lineup for training camp. One of the more consistent and reliable defensemen for the Blackhawks, although that doesn’t say much for this group. A key figure defensively on Chicago’s penalty-kill.

Connor Murphy – Still getting his playoff legs underneath him for the first time in his career. Murphy is a solid shutdown defenseman in the NHL and is heavily deployed against opponent’s top players and plays hard minutes on the penalty-kill.

Olli Maatta – One of the more experienced players when it comes to postseason hockey on the roster. His experience came from two Stanley Cup championships with the Pittsburgh Penguins a few seasons back. He’s a decent option as a third-pairing defender, but lacks in his skating ability and speed. Used a lot on the penalty-kill.

Slater Koekkoek – Bounced around the lineup for a good portion of the season before settling into a third-pairing role after the season-ending injuries to Brent Seabrook. Quietly one of the more effective Blackhawks defenders offensively, although he doesn’t see much of any special teams minutes.

Corey Crawford – One of the most underrated and underappreciated goalies of the last decade. Crawford isn’t what he used to be and is still coming back into form after recovering from COVID-19. When he was needed most against the Oilers in the Qualifying Round, he answered the bell. If the Corey Crawford that stopped 43/45 shots in Game Four shows up for the series against the Golden Knights, Vegas could be in for a surprisingly long series against Chicago.

Malcolm Subban – Vegas still knows him better than Chicago does. Subban is fine as a backup option to Crawford, but if he’s called upon for any reason in this series, the Blackhawks are in rough shape. Still don’t know what his future is with the organization beyond these Playoffs.

Where, When, And How The Blackhawks Scored And Conceded Against Edmonton