In their first official roster activity since the NHL season was put on halt, the Golden Knights locked up defenseman Zach Whitecloud to a two-year contract at $725K AAV.

Whitecloud becomes the third Golden Knights defenseman to be locked into next season since early February. First, Vegas acquired Alec Martinez and will pay him $4 million against the cap in 2020-21, then they extended Nick Holden on trade deadline day for a cheap $1.7 million for two seasons, and now Whitecloud.

That leaves the Golden Knights blueline fairly stocked. Shea Theodore and Nate Schmidt are under contract for each of the next five seasons, Brayden McNabb, Holden, and Whitecloud each have two years left now, and Martinez’s deal expires at the end of next season.

That’s six NHL defensemen under contract for the 20-21 season with Nic Hague, Jake Bischoff, and Dylan Coghlan all waiting in the wings in the AHL. Plus, Jimmy Schuldt will become an RFA whenever free agency opens this summer meaning he’ll likely stick around for another year as well. 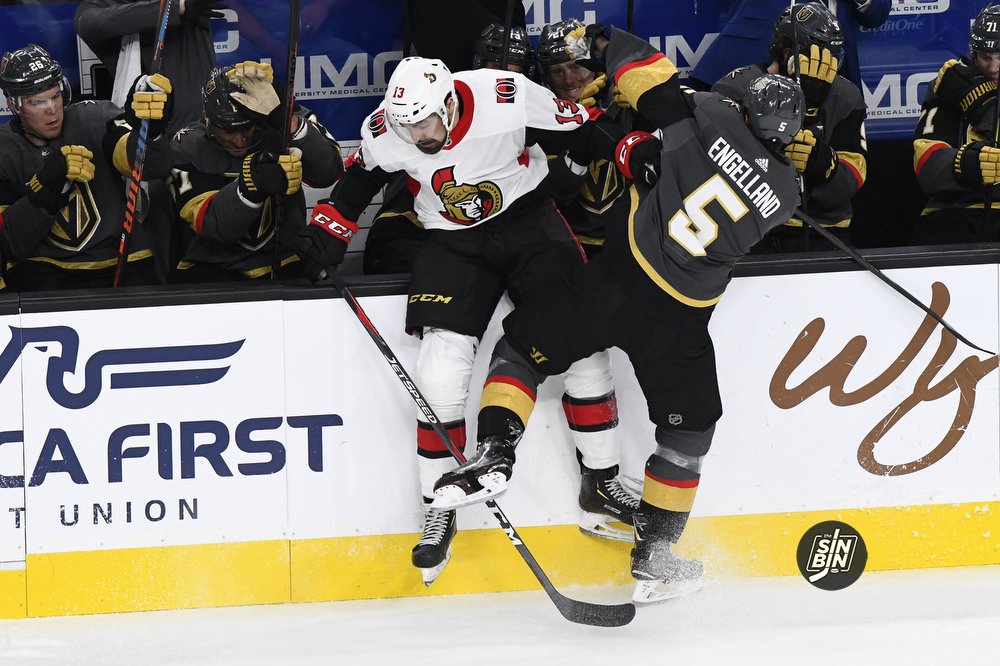 So, where does that leave the two defensemen currently on the roster both set to become UFAs? Well, the previous nine games before the pause told the beginning of the story (neither Merrill nor Engelland played defense in any of them), Whitecloud and Holden’s extensions tell the middle, and now the end will have to wait until July 1 (or whatever the equivalent is this year).

Under Gallant, Merrill played 38 of the Golden Knights’ 49 games. Engelland was in Gallant’s lineup for 44 of 49. Under DeBoer, Merrill has played 11 of the 22 (with one as a forward) and Engelland just five. Clearly, both Merrill and Engelland had fallen out of the Pete DeBoer led Golden Knights lineup prior to the pause.

Now, with six defensemen under NHL contract and four more pushing for time there’s simply not space for both Engelland and Merrill, if there’s even space for one.

Plus, looking over the roster and the salary cap balance sheet, if there’s one place for Vegas to upgrade with a massive piece, it would be on defense (paging Alex Pietrangelo).

Things get even trickier for Merrill and Engelland when you consider that none of the six NHL contracts are waiver-exempt next season. Also, Nic Roy will require waivers next season as well. Vegas spent the majority of the season juggling their roster this year because they could. Glass, Hague, Whitecloud, and Roy could all go back and forth without any risk. That’s no longer the case for Whitecloud and Roy, which means the expected roster already has 18 (and 19 if you count the backup goalie), waiver-eligible players. There’s simply no room for another one.

The move of signing Whitecloud should be celebrated as it was done for an incredibly cheap price and it gives the Golden Knights even more cap flexibility heading into an offseason with an uncertain cap. But, for those who are fans of original Golden Misfits, the deal likely signals the end of at least one and probably two of them.

Carp: Ready For The Future

So, where do the Golden Knights turn now?

Here's a look at some line combinations they could be forced to roll out as well as another potential solution. https://sinbin.vegas/assessing-vgks-options-without-mark-stone-and-max-pacioretty/