Where To Play Tomas Tatar When Everyone’s Healthy

Since being acquired from the Detroit Red Wings, Tomas Tatar has played in four games. He has one goal, seven shots on goal, a -5 rating, and an average ice time of 15:36. The team is 1-3-0 in those four games.

Now, before we go killing the new guy, let’s start by pointing out that he’s played on four different lines, all with significantly different characteristics. Tatar has played with Hyka and Eakin, Perron and Haula, Tuch and Eakin, and Carpenter and Eakin. To this point, none of them have been a match, but of course, we are judging each on a single game.

The fact of the matter is that Tomas Tatar is not coming out of the lineup anytime. He’s far too talented on the power play, way too fast, and has too much skill to be taken out of the lineup in favor of a Tomas Hyka, Oscar Lindberg or William Carrier.

So, much like we did with Alex Tuch back in November, this is an exercise in finding Tatar the right linemates to help him thrive, and in turn, create a third scoring line heading into the playoffs.

The initial plan when Tatar was brought in was for him to slot into the Leipsic/Lindberg/Hyka third line wing slot. The main question though is whether or not he will fit with Tuch. In just a short time together, Tuch and Tatar have not been a match. Their Corsi For % is just 35%, they’ve allowed eight shots on goal while just creating one, and have yet to create much by way of scoring chances. In fact, for a majority of the game in which they played together, they were hemmed in their own end. 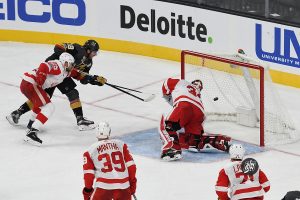 If Tuch and Tatar are not a fit together, that means one of them must make their way onto the Haula/Perron/Neal line. In James Neal’s absence, Tuch has quietly become a force on the second line. He was moved up when Neal went out in the first Kings game, and it took a little while for them to gel. But when it did, they’ve become a versatile offensive line that has put up big advanced stat numbers since. Against Columbus, that line outshot the Blue Jackets 15-3 and accounted for the Golden Knights only goal.

David Perron, on Alex Tuch telling @AlysonLozoff between periods that Perron was one of the smartest players he's ever played with: "He must have played with a lot of dumb players." #VegasBorn

Alex Tuch, on David Perron's puck protection ability: "He's the best puck protector I've ever seen. He holds 1, 2, 3 guys on his back and still holds onto the puck. Seen him hold onto the puck on his knees." #VegasBorn

Which leaves James Neal needing a place when he’s ready to return. That would mean pairing him up with Tatar and having the line centered by Cody Eakin. Way back at the beginning of the season, Eakin centered the line with Perron and Neal, and for a short time, they were excellent. Think back to Dallas, Arizona both home and away and Detroit, Neal scored in all of them. Eakin tallied a pair of assists and got on the board playing with Neal and Perron a few games later.

Then All Star head coach Gerard Gallant realized he needed to inject a bit of speed into that line. He moved up Erik Haula, and things had been great since. Now, that speed can be brought by Tatar. The line would be well balanced with a speed guy, a shooter, and a defensive specialist, plus all three players are solid controlling the puck.

Assuming Reilly Smith’s health, this would be the Top 9.

That would leave Bellemare and Nosek to continue playing together and either Carpenter or Reaves fitting in their place.

The problem is that three of the four lines would be different from what got the Golden Knights to the dance in the first place. This setup may look best for now, but there’s simply no right answer. When it was Leipsic, Lindberg, Hyka, or anyone else on the third line, they appeared to be the problem needing fixing, but if the supposed fix in Tatar isn’t a fit, then further shuffling is needed.

There’s a long-standing saying in sports that “you can never have too much depth.” That may indeed be true, and the Golden Knights are going to find out, but with depth comes decisions, and with decisions come mistakes.

Gallant has done an award-winning job up until this point, but his toughest task is ahead trying to juggle a lineup that when healthy has too many pieces… and we haven’t even started talking about the “fourth” line yet.