It’s the obvious question to ask following the stunning news of Nate Schmidt’s 20 game suspension, what now? It gets even worse when you consider the possibility of Shea Theodore missing games, but for the purpose of this article (and because this isn’t the time of year for doom and gloom), we’re going to assume Theodore is on the ice on October 4th.

According to offseason quotes by George McPhee, the Golden Knights are expected to keep eight defensemen on the roster out of training camp. With Schmidt out, the roster has a total of 15 available players to fill those eight spots. Five names can probably be safely cast aside as longshots to make the roster (Zac Leslie, Dylan Coghlan, Jimmy Oligny, Jake Bischoff, and Nic Hague) leaving 10 players to fill the eight places. 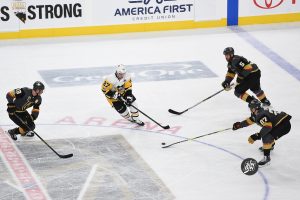 It really comes down to Brad Hunt, Jon Merrill, Griffin Reinhart, Zach Whitecloud, and Erik Brannstrom fighting for three spots and one starting role. The odds on favorites are Hunt and Merrill with them splitting time as the six starter spot to go along with Deryk Engelland, Brayden McNabb, Colin Miller, Shea Theodore, and Nick Holden.

Engelland and Miller are the only two right-handed defensemen of the group of five highly likely to crack the starting lineup, but Holden has played most of his career on the right side. Thus, in theory, there are the beginnings of each of the three pairs.

That leaves Theodore, McNabb, and Hunt/Merrill as each’s partner. Last year Jack Adams winner Gerard Gallant used both Theodore and McNabb with Engelland quite a bit. Assuming he returns to those familiar pairings, we’re left with four potential sets of pairings.

Theodore and Engelland proved they work well together as Engelland is everything Theodore is not and Theodore is everything Engelland is not. McNabb works better with a player who can skate well and who is willing to take a risk, that would be Miller. Finally, Hunt and Holden would likely pair well together in games in which the Golden Knights want a bit more offense and Merrill and Holden when they expect a lower scoring game.

It appears the Golden Knights have the defensive depth to deal with the loss of Schmidt. With Merrill and Hunt both capable defensemen, they might even be able to survive a short stretch of missing Theodore (or someone else) as well. But when that inevitable injury comes, this roster might come up short as currently constructed.

It’s only 20 games though, and it’s a number that can be counted on, unlike when players are missing with long-term injuries. Thus, don’t expect McPhee to panic and make a move to offset the loss of Schmidt until late November.

That being said, if a move was already in the plans, this certainly won’t stop it from happening, and maybe even sooner than was originally scheduled.