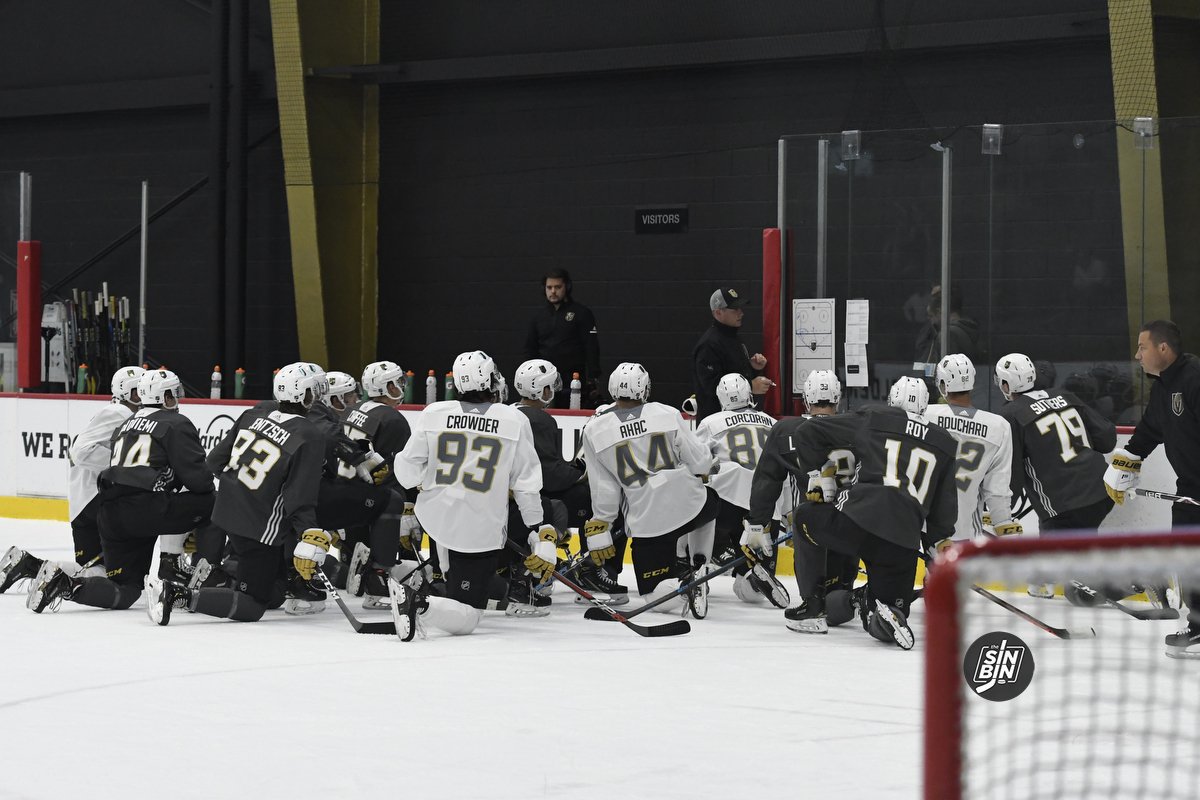 While we wait with uncertainty on the specifics of the 2020-21 NHL season, there’s plenty of VGK hockey being played. Currently, 17 Golden Knights prospects are either already playing or getting ready to play this season.

Here’s a list of all Vegas prospects in action and how to watch their games.

Entering his sophomore season, Ahac’s Buckeyes are expected to be very good this season, already ranking in the Top 10. Ohio State games can often be found on NBCSN, Big 10 Network, or Big 10+.

Brisson has played in his first two collegiate games and is already on the board with two points. Michigan games can often be found on Big 10 Network and Big 10+.

Campoli is entering his Junior season as a Clarkson Golden Knight. He has been more of a checking forward to this point in his career. Maybe this is the season the offense starts to come through. It needs to or his time as a VGK prospect will be limited. Clarkson’s schedule begins on November 22nd with many games airing on ESPN+.

Cormier is a big-time point collecting defenseman that is a lot of fun to watch. He’s in the running to be a part of the Team Canada World Junior roster for the tournament beginning on Christmas Day, but in the meantime, the QMJHL rolls along with a few games a week. All QMJHL games stream live on their website using the All Acess subscription.

Diliberatore had an excellent sophomore season and should be expected to be a huge part of a very good Quinnipiac team. The Bobcats first game is scheduled for November 24th with a few games streaming on ESPN+.

Donovan scored a pair of goals in the Badgers’ second game of the season. He’s currently playing on the 4th line as a wing. Many games air on Big 10 Network or stream on Big 10+.

The skillful 20-year-old is splitting his time between the three Russian leagues playing most in the VHL, the 2nd highest league in Russia. Some MHL games can be streamed at OnHockey.tv.

The USHL season is underway but the Buccaneers’ first game was postponed. Their next game is scheduled for Friday, November 20th. All games can be streamed on HockeyTV.com.

The WHL is scheduled to get back underway on January 8th, where Kallionkieli is expected to return to the Wheat Kings. As for now, he’s on loan with a U20 team in Finland. He has five points in nine games so far with that team. Kallionkieli may be a part of the Finish World Junior team as well. WHL games can be streamed on WHL Live.

Korczak should be in for a massive season as a 20-year-old 2nd round pick in the WHL. Plus, he’ll likely be a part of the Team Canada World Junior roster. The WHL season starts on January 8th. WHL games can be streamed on WHL Live.

Assuming Krebs does not make the Golden Knights roster, he’ll be headed back to Winnipeg. He should be in line for more than a point per game and could potentially be the MVP of the league. He’ll certainly be on Team Canada at the World Juniors as well. The WHL season starts on January 8th. WHL games can be streamed on WHL Live.

Kruse has been nearly a point per game player each of the last two seasons at Bowling Green. Entering his senior season he could be one of the nation’s top scorers. Kruse already had two points in the Falcons first game. Many games are available on FloHockey.tv.

Morozov is playing full time with the big club in the KHL and playing fairly well early in the season. KHL games can be streamed at OnHockey.tv.

Patera has been loaned to the Czech side, until things are figured out in North America. He’ll likely be in the ECHL, unless the Golden Knights decide to let him stay in the Czech Republic, which is possible. Patera plays for the reigning champions of the league. Czech Liga 1 is unavailable to watch in the US.

Primeau was named an alternate captain last season and is expected to take another step forward this year. The OHL is scheduled to start on February 4th. OHL games stream on the OHL Live (there is no link active at the moment).

Saville is expected to be the starter in his sophomore season. Nebraska-Omaha’s season gets underway on December 1st. Games stream on NCHC.tv.

The young goalie is currently playing in the Swedish junior league where he’s played nine games this season and is 5-4-0. Swedish U20 games do not stream in the US.