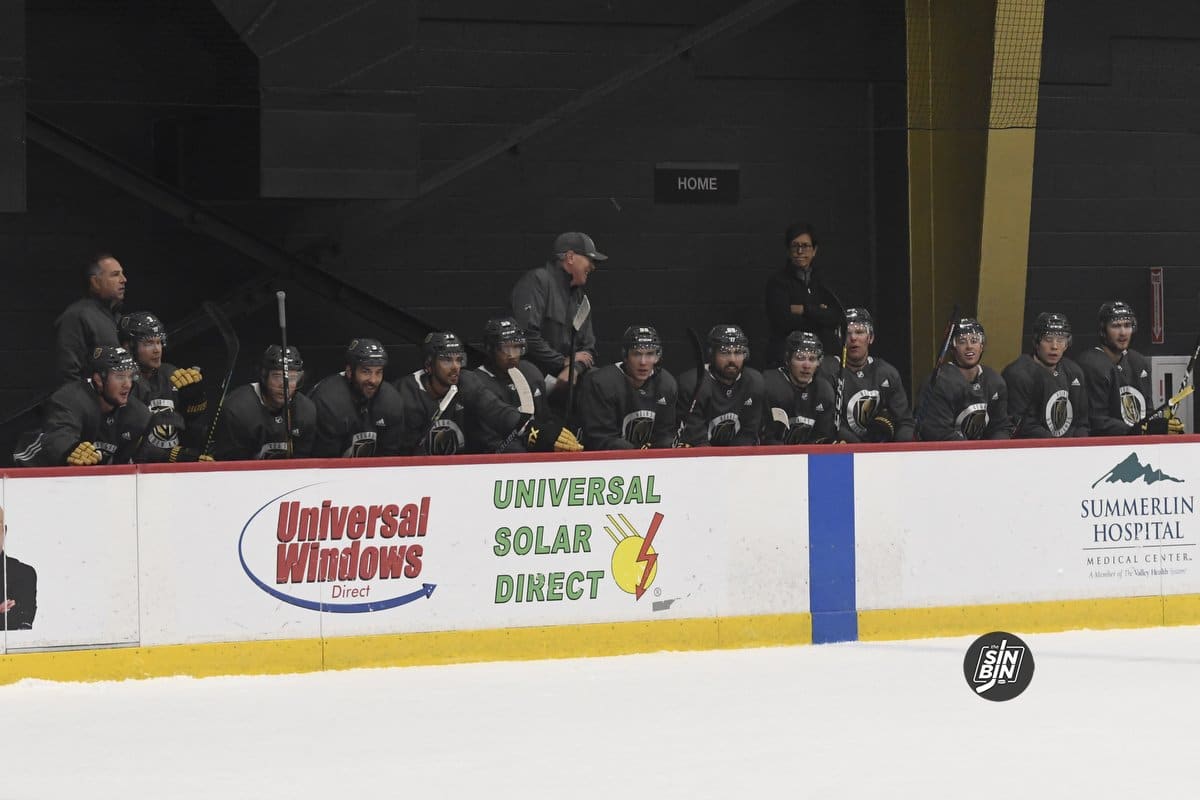 The Golden Knights open on-ice Training Camp today as they prepare for the abridged 2021 regular season. Unlike a normal camp that is nearly a month-long, this one is condensed to less than two weeks with the season opener right around the corner on January 14th. 4o players will be in camp for the Golden Knights, 24 forwards, 12 defensemen and four goalies.

Here’s what we’ve got our eyes on as the Golden Knights get back on the ice.

Normally I wouldn’t care how often guys were scoring in drills or scrimmages during camp, but I can’t get my mind off the camp in July before the Golden Knights headed up to Edmonton and the bubble. That camp was marred with an inability to score basically up and down the lineup. At the time, we chalked it up to great goaltending, excellent defending, and rust from being off for a few months. Then, the Golden Knights caught fire scoring when they first got going in the playoffs. So, all seemed well. Of course, we all know how the year ended for Vegas and it brought me back to that camp. When I say the Golden Knights couldn’t score at City National Arena before they left, I literally mean there were 10 minute long drills where the puck would go in once, 20 minute long scrimmages where neither team scored, and one specific 2-on-1 drill I remember that went 0 for 31.

I want to see something different this time around. Marchessault, Pacioretty, Stone, Karlsson, Smith, Tuch, Theodore, Pietrangelo, put the puck in the net, please. Scoring draughts have been an issue for the Golden Knights for two seasons running and the time for it to stop is now, like literally today in training camp.

It would take something monumental for Marc-Andre Fleury to unseat Robin Lehner as the starter for Vegas against the Ducks on the 14th, but it’s not like we haven’t seen anything like it before. When the season paused, Fleury and Lehner were splitting the goal evenly. Then, despite Pete DeBoer claiming otherwise, somewhere between Phase 3 (July camp) and Phase 4 (games) of the Return to Play, Lehner won the job.

I was at every practice during that July camp and it wasn’t hard to see who was stopping the puck more frequently. The Golden Knights were struggling to score, but when they did, it was usually on Fleury. It’s important to note that in the three years I’ve watched practice with Fleury in the goal, it’s not uncommon to see him get scored upon fairly frequently. However, it clearly meant something to the head coach and it probably will again in this camp. If Fleury wants his job back, he has to dazzle in camp. There aren’t any preseason games but he’ll see plenty of shots in front of DeBoer at CNA. If he stops a bunch more than Lehner, maybe we’re in for yet another controversial switcheroo.

Of the 40 players in the Golden Knights camp, six of them are VGK draft picks from the 2017 Draft. Cody Glass is ticketed for a major role on the team this season, so it would be nice to see him flash like a projected #2 center should. It’s the other five guys that I’m really looking at though; Jack Dugan, Lucas Elvenes, Jake Leschyshyn, Ben Jones, and Nic Hauge. Roster spots are limited but with the cap crunch the Golden Knights are facing, there are spots to be had if someone steps up and really claims one. Dugan dominated in college last year, Elvenes was one of the best AHL rookies, and Hague had limited success at the NHL level. Someone step up and make that draft class look like something more than a bushel of assets the front office used to buy Pacioretty and Stone.

One of the greatest concerns for the Golden Knights coming into this season is their center depth. William Karlsson is a legit high-end center, but it gets real thin real quick behind him. The first question is which one of the remaining four is the odd-man-out and gets sent to the 3rd line wing. Chandler Stephenson was the most successful of the four (Glass, Roy, Nosek, Stephenson) last season, but he also is the best fit on the wing if the other three can hold down the fort. It will be interesting to see how DeBoer lines them up in scrimmages, who works with which group, and who is between Pacioretty and Stone. If the Golden Knights aren’t one of the best teams in the NHL, a big reason will be their centers. It’s probably going to be a revolving door for a while, but I’d love to see at least the 2C job locked down in the next two weeks.