What To Expect From Nick Holden

Most of the Golden Knights offseason headlines have been focused on the addition of Paul Stastny, the departures of James Neal and David Perron, and the re-signings of Marc-Andre Fleury, Ryan Reaves, and William Karlsson. But, the player who will likely see more ice time than everyone mentioned above, expect Fleury, has kind of flown under the radar.

Defenseman Nick Holden signed a two year, $2.2 million deal with the Golden Knights. With it, he instantly projects to be in the Vegas lineup and possibly even the top four. At first glance, and coming from the mouth of the GM, Holden is simply a replacement for Luca Sbisa.

It basically keeps the construction of our defense intact. Luca has moved on, we thought he would fit really well in that spot, and we like him a lot. We got the deal done on the terms we liked. Everything stays the same on our defense and we like our defense. -George McPhee

However, there’s a real chance Holden can become much more than that. Holden is a 6’4″215-pound stay-at-home style defenseman who is reliable on the penalty kill. With New York and Colorado, he was primarily used as a shut-down defenseman starting over 58% of shifts in the defensive zone. His career average of 20:01 TOI puts him right in line with Shea Theodore, Deryk Engelland, and Brayden McNabb.

I’m a little more of a simple player. Try to move the puck to the forwards and make a hit when I can. I’m not going to skate through anybody or go end to end, I’m kind of just a simple solid player. –Nick Holden to BostonBruins.com 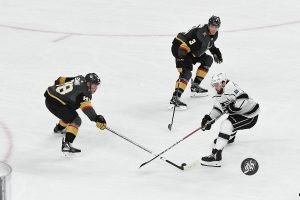 Could Nick Holden be the one to split up Schmidt and McNabb? (Photo Credit: SinBin.vegas Photographer Brandon Andreasen)

What makes Holden more valuable is his ability to play on the right side. He’s left-handed but says he feels more comfortable playing on his off-side, something Luca Sbisa was not able to do. Holden is a big guy with a long stick and isn’t afraid to be physical when necessary, in other words, he’s essentially Brayden McNabb, but with the ability to play on the right.

Why this is so crucial is because Vegas has just three right-handed defensemen on the roster. Deryk Engelland, Colin Miller, and Zach Whitecloud. Last year, Nate Schmidt filled the role as the left-handed defenseman playing on the right side and did it quite well. Odds are, after the season he had, Jack Adams winner Gerard Gallant will not move Schmidt, but the versatility of both Schmidt and Holden is a luxury.

It will be interesting to see how Holden is utilized early in training camp as the three right-d spots are likely already filled by Schmidt, Engelland, and Miller. But, if Holden is good, Gallant will be presented with a bevy of options.

Nick Holden is not going to score a ton of goals, he’s not going to join the rush too often, and he’s likely to end up with a negative Corsi rating due to a majority of defensive zone starts. In other words, he’s probably not going to be a favorite player of many (if any at all), but where he will be a favorite is in the office of Gerard Gallant because he’ll be reliable, he’ll kill penalties, and he’ll offer positional flexibility, something the Golden Knights did not have a lot of on the blueline a year ago.

Exactly How William Karlsson Scored Each Of His 43 Goals