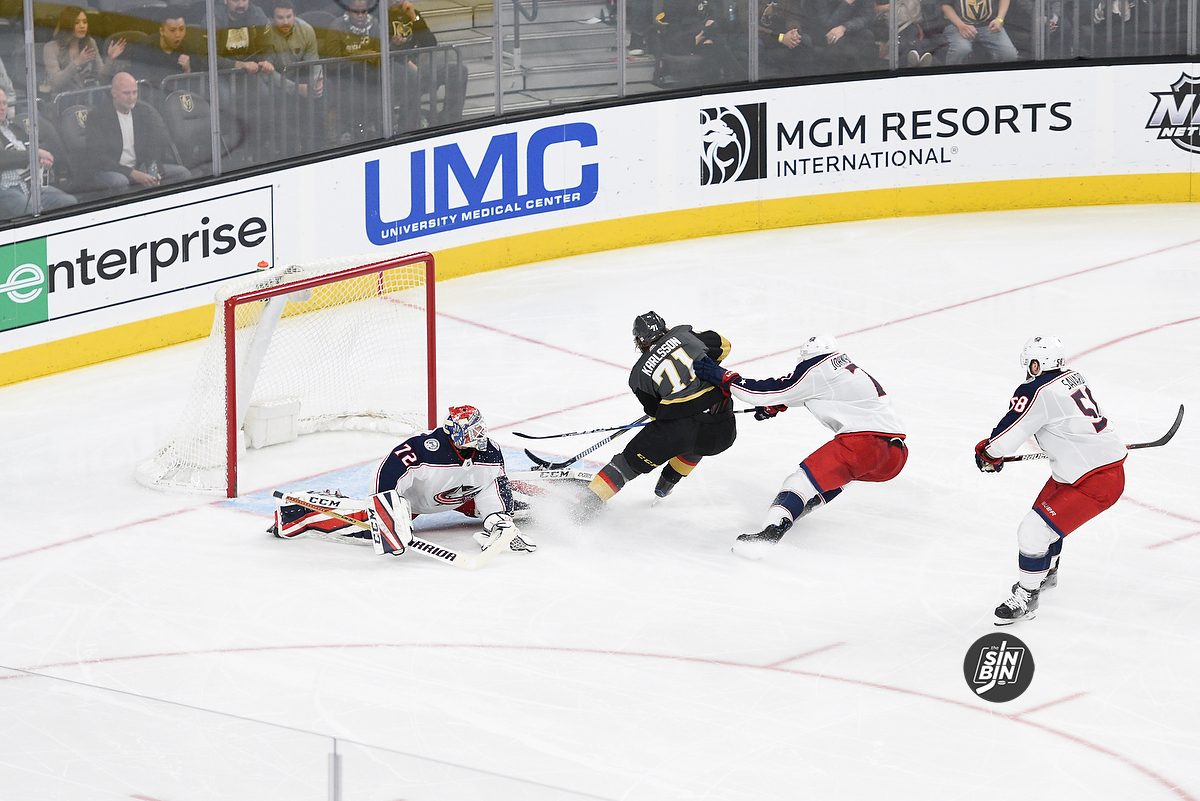 Wonder what the Blue Jackets think of all this? (Photo Credit: SinBin.vegas Photographer Brandon Andreasen)

While most of the hockey world is focused on Erik Karlsson, the Karlsson Vegas already has might be just an interesting a story this offseason. William Karlsson’s monster season has him in line for a massive raise, but as an RFA, and with just one dominant year in the books, the right contract for both sides could look many different ways.

The 25-year-old Swede scored 43 goals, became a top line center on the Western Conference champions, won the Lady Byng Trophy, and finished top 10 in both Selke and Hart voting. He posted career highs in goals, assists, points, time on ice, shots on goal, shot attempts, shooting percentage, face-off percentage, takeaways, Corsi for, and just about every other advanced stat hockey keeps. It was, in every sense of the word, a career year.

But, it was a career year playing on a new team, in a new situation, with new linemates, a new coach, and totally new responsibility. Moving forward, Karlsson will be expected to play the same role with the same responsibility for the Golden Knights. The question is, how should he be paid?

There are really two ways a deal for Karlsson can go, either a short-term “bridge deal” that would make him an unrestricted free agent in two years or a long-term deal that keeps him with the Golden Knights until he’s into his 30’s. So let’s play the pros and cons game for both sides to illustrate how challenging these negotiations are likely going to be.

That was all fairly generic too. In short, this is a complicated situation.

While the Golden Knights hold a ton of power in the fact that Karlsson can only sign a deal with them, Karlsson is not completely void of negotiating power himself. Because arbitration is only allowed to hand out a maximum of a two-year contract, if Karlsson wants the short-term deal, he’s guaranteed to get it.

Like every good Vegas story, it’s going to come down to gambling. Does Karlsson gamble on himself or are the Golden Knights willing to take the long-term gamble?  No matter how this shakes out, there’s an inherent risk for each side.

Personally, I’m rooting for a seven-year deal worth somewhere in the neighborhood of $6 million per year. That’s $42 million for Karlsson, while the Golden Knights would have their entire top line locked up through 2022 for just $16 million. That’s about 20% of the salary cap today, and will only get better as the cap raises in subsequent seasons.

My honest guess though is that Karlsson will opt for the “bridge deal.” A two-year deal that will get him to age 27, and therefore make him an unrestricted free agent. The price tag would probably be around $4-5 million per year. Not the end of the world, but if he ends up continuing to be the player we saw last year, and I think he will, McPhee and Co. will look back at this offseason as the one that got away, because of the Karlsson they already had, not the one they wanted to get.