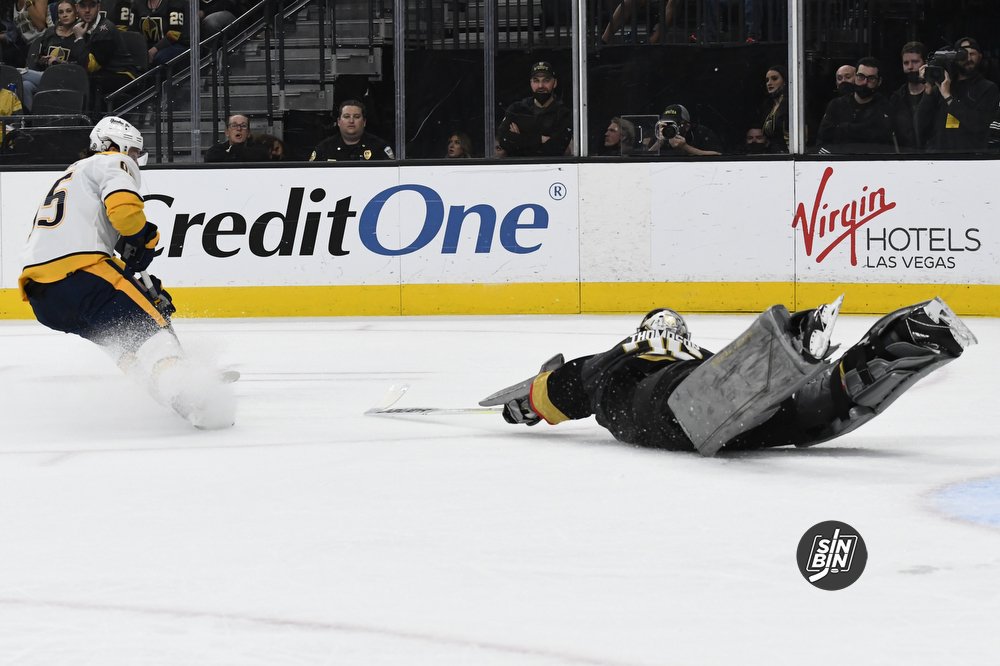 It was just five days ago when Kelly McCrimmon said the Golden Knights’ plan was to head into the season using the tandem of Laurent Brossoit and Logan Thompson in net. He said after internal discussions the team felt they really liked the two guys and they both “earned the opportunity” to take the reins between the pipes.

Then, yesterday, they went out and surrendered a 4th round pick to add 26-year-old goalie Adin Hill and his $2.175 million cap hit.

With NHL front offices, actions speak much louder than words. So, what exactly does this move say? Quite a bit actually.

First of all, it’s important to note that what McCrimmon said last week was the correct statement to make in the moment because it set the Golden Knights up nicely whether they wanted to add a goalie or not. If they were considering it, which we now know they were, it made sense to keep that information close to the vest to ensure they were not taken advantage of on the trade market. Plus, if any deal for a goalie fell through, it was best to portray confidence in Brossoit and Thompson in the event they did enter the season as the tandem.

But, despite it being the correct thing to say, it’s unclear whether or not the statement was actually what the Golden Knights truly believed. The acquisition of Hill says two different things depending on its validity.

If VGK did truly believe five days ago that Brossoit and Thompson were the plan, then the trade shows they think Hill is either already, or has a strong chance to be, better than both this season. If VGK projected Hill to be third behind Brossoit and Thompson, they never would have rushed out to spend a draft pick and use up cap space to make this move.

If VGK did not truly believe in their goalie tandem as they were presenting, the move can be viewed as insurance or even another lottery ticket. If you like the two guys in the organization but aren’t completely sure they can get the job done over the course of an 82-game season, it makes perfect sense to burn through a little draft capital to have another legitimate option in the system.

Personally, I tend to think it’s the first one. That McCrimmon and Co. did indeed believe they were going to head into the season with Brossoit and Thompson, but when they learned the cost of Adin Hill was just a 4th round pick, they felt they were upgrading (probably significantly) over one or both and went for it.

This brings us to the next piece of information the trade indicates, which is again a “this or that” situation. It regards the health of Brossoit or the trust level in Thompson. By trading for Hill and spending something to do it, he essentially becomes a lock to make the Opening Night roster, which in turn leaves either Brossoit or Thompson off the roster. If it’s Brossoit, it’s almost certainly due to his health. If it’s Thompson, it means VGK knew Brossoit would be ready and will utilize Thompson’s waiver exempt status to re-assign him to Henderson. So, either the move says Vegas are aware Brossoit will miss time to open the season or they think both Hill and Brossoit are better than Thompson.

Again, I’m going with Option A. If the Golden Knights are aware Brossoit will miss some time, adding Hill gives them depth to stem the tide until Laurent is ready. At that point, they will have extra data on both Hill and Thompson to make the decision of which two to keep up at that point. But, I can’t say I completely rule out Option B, because this is incredibly similar to the signing of Brossoit last season. On multiple occasions, VGK have professed their belief in Thompson, but at no point have the actions ever backed it up. Until they do, it must be considered.

Finally, the trade gives us a bit more detail on how the Golden Knights feel about the collection of goalies not named Thompson or Brossoit. Adding Hill essentially confirms the Golden Knights have no plans for Michael Hutchinson to suit up in NHL games. In turn, that means Hutchinson will be in the AHL, indicating either Jiri Patera or Isaiah Saville will head down to the ECHL. Pushing the 23-year-old Patera and 21-year-old Saville down the depth chart isn’t horrible surprising, or unexpected, but it does show they still need quite a bit of seasoning before either is ready to even serve as a backup at the NHL level.