What Should/Will The Golden Knights Do With Brandon Pirri And Their Roster Crunch In The Coming Weeks? 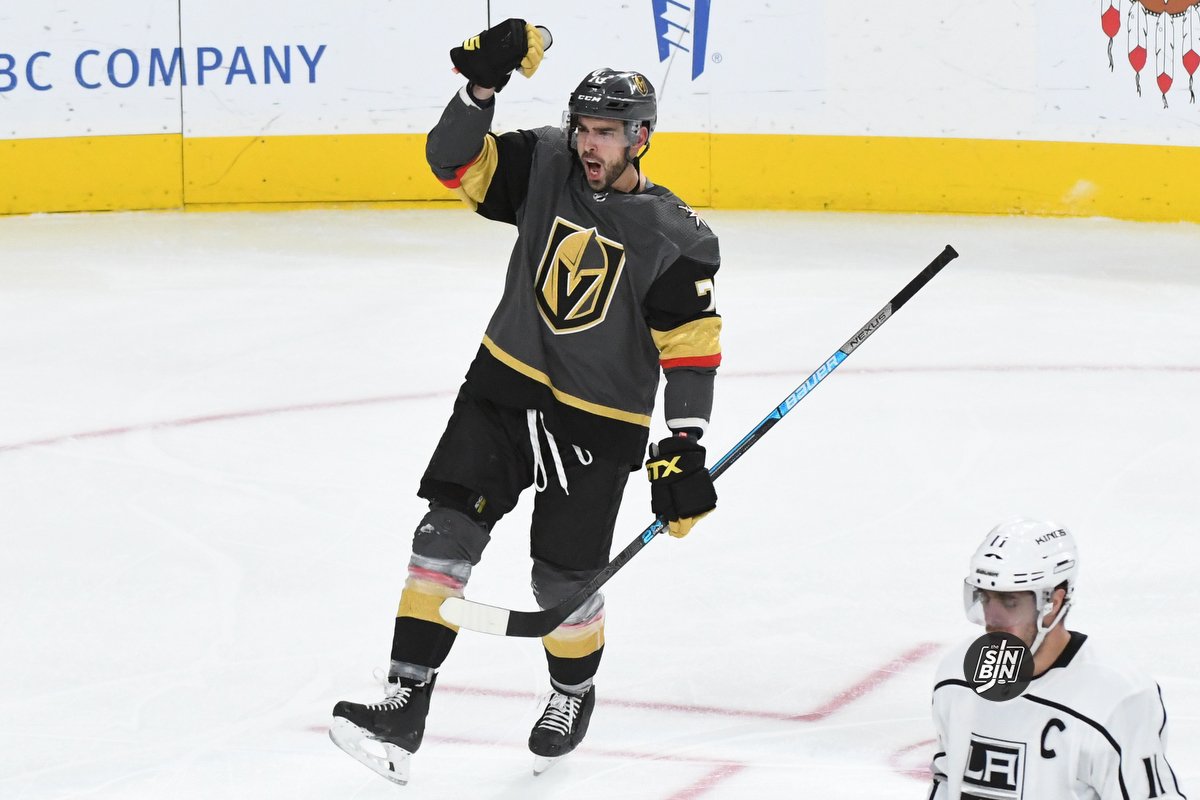 The emergence of scoring wizard Brandon Pirri, coupled with injuries to Colin Miller and Max Pacioretty, and the waiver claim of Valentin Zykov has left the Golden Knights in a roster pickle, with 25 players and only 23 available spots.

There are a few questions on just about every Golden Knights fan’s mind and we’ll attempt to answer every single one in this article. Read on.

As of this moment, the Golden Knights roster stands at 23 with Colin Miller and Max Pacioretty on IR.

Valentin Zykov was claimed on waivers from the Edmonton Oilers on Saturday. Per NHL rules, if the Golden Knights want to keep Zykov, he must remain on the NHL roster for the remainder of the season.

Brandon Pirri has scored six goals in seven games with the Golden Knights and has played on the 2nd line with Alex Tuch and Paul Stastny in all seven games. Per NHL rules, Pirri is allowed to be sent back to the AHL without clearing waivers if he does not play in 10 games OR is on the active roster for fewer than 30 days. Thus, if he plays three more games or is on the roster for another 15 days, he would have to once again clear waivers to be sent back to the AHL.

Through 43 games, Oscar Lindberg, Ryan Carpenter, Tomas Nosek, Pierre-Edouard-Bellemare, Max Pacioretty and Ryan Reaves are the only forwards on the roster to have been scratched by Gerard Gallant without being on IR. Reaves, Pacioretty, and Bellemare were each scratched once and they all are believed to be injury or family/medical related. Carpenter has been scratched three times, Nosek has been scratched four times, and Lindberg has been scratched 23 times. However, in the past six games that Gallant has had to choose two of those three, he has scratched each one of them two times. The most recent player to be scratched was Nosek.

I was specifically warned against doing this, but what’s the point of the Internet if not to do things people tell you not to and make them angry (Sorry, I’m not sorry Turk).

Let’s start with Zykov as he’s the biggest unknown of all of this. The Golden Knights could instantly clear one spot on their roster by immediately putting Zykov back on waivers. That would allow either Pacioretty or Miller to come off IR and the roster remain at 23.

However, Gallant made a comment in a recent press conference that he started watching film on Zykov “the first time he went on waivers” which indicates that Vegas may have wanted him originally. They did not have priority so he went to Edmonton, then when he hit waivers again, Vegas claimed him and got him. Thus, it makes sense that this is not a short-term rental that won’t be given a chance, but instead that McPhee/Gallant see something they like and they want to give him a shot.

He’s expected to finally make it into the country today after having some immigration issues. He’ll probably practice a few times with the team before getting in a game, but if he remains on the roster when Pacioretty comes back, it should be expected that he gets at least some game action with the Golden Knights.

So, let’s say we expect him to stay, at least for a little while. When Pacioretty comes off IR someone is going to have to be taken off the roster to comply to the 23 man limit.

The easiest option would be for another injured player to be placed on IR. At the moment, the Golden Knights do not have any other players we believe to be injured. In January of last season, when VGK was in a similar bind, Jon Merrill was placed on IR with what was described as an “undisclosed injury,” to make room for Luca Sbisa who came off IR. Clearly, it is against the rules to declare a player that is not injured, injured, however, don’t be completely stunned if there’s a surprise injury that we were unaware of that leads to an IR stint which opens a roster spot for Pacioretty.

If that were not to happen, then McPhee would have to choose one player to be sent back to Chicago. The most likely options are the three forwards previously mentioned (Carpenter, Lindberg, or Nosek), one of the commonly scratched defensemen (Merrill or Hunt) or Brandon Pirri. Before we move on, let’s address Pirri.

Can you really send Pirri back to the AHL?

The short answer is yes, they absolutely can, and the reason is not that he’s not good enough to be on this team. The main reason is that if he doesn’t hit that 10th game, he’s the only guy on the roster (aside from Tuch and we know that’s not happening) that can go to the AHL without risk of being lost on waivers.

However, let’s be honest, do you really think the Golden Knights are going to take the hottest scorer off their roster? The answer is almost certainly no. The only reason they might is that Gallant simply refuses to use him late in games. In each of the last two games he took one shift in the final 10 minutes, and that’s been fairly common in his seven-game stint. That’s minor compared to his six goals in seven games though and Pirri skating on the 2nd line in practice yesterday (and probably again today) is a sign that he’s not going anywhere.

So, let’s say it’s not Zykov, it’s not Pirri, and there’s no magical injury. It really comes down to five players, Carpenter, Lindberg, Nosek, Hunt, and Merrill. When both Pacioretty and Miller are ready to return, two of those guys must go.

This doesn’t completely rule out the possibility, but the Golden Knights have carried eight defensemen for all but a few games in their short history. They clearly prefer the 13 forward, eight defenseman, two goalie set-up. Assuming they don’t waver from that, it’ll be two of the forwards.

Again, Zykov could be one of the forwards to go, but let’s continue along assuming he’s not.

The most important step to all of this is to figure out which players are least likely to be claimed on waivers. (If you are still confused about how waivers work, read this.) Honestly, no one knows the answer to this question, including George McPhee. If I were to guess, I’d put them in this order, from most likely to be claimed (and thus no longer with VGK) to least likely: Nosek, Merrill, Hunt, Carpenter, Lindberg. Here’s why I ranked them the way I did. 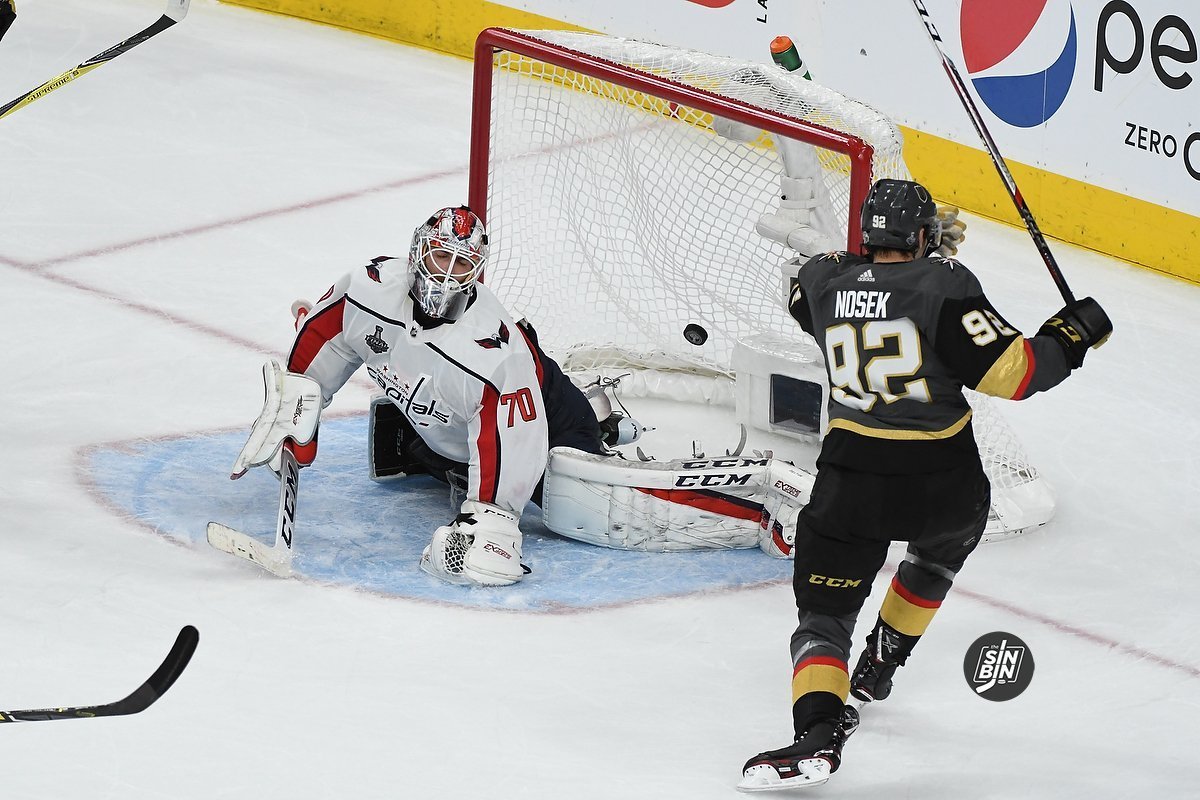 Nosek: GMs love a young guy with upside (see Valentin Zykov). Nosek is 26 years old, is an RFA this offseason, and he scored three goals in the Stanley Cup Final. Guys like this don’t hit waivers often and he’d almost certainly get snapped up by somebody.

Merrill: He may be much maligned here, but there are so many teams that could use a viable defensive option like Merrill. His contract is very affordable for the next two years at $1.375M.

Hunt: Aside from the fact that he’s literally the ideal 23rd man on a roster, Hunt is a good offensive weapon on the blue line. Also, he’s hit waivers before and has been claimed (in 2016-17 by Nashville). The drawback to potential waiver claimers is his contract. Hunt is a UFA at the end of the season, so teams without playoff aspirations will likely have no interest. That rules out about 10 teams.

Carpenter: Like Hunt, Carpenter is on a league minimum deal ($650,000) and is a UFA following the season. Again, this rules out most non-contending teams. However, Carpenter has been claimed (by VGK) on waivers once before and he’s shown the ability to be useful in all situations. He’s a great penalty killer and showed a scoring touch when he was previously claimed. Do I think he clears? Yes, I do, but I wouldn’t be thrilled to take the risk if I’m Geroge McPhee.

Lindberg: Another UFA following this season but Lindberg carries a contract of $1.7M. Again, we’ve ruled out bad teams, but this also rules out cap-strapped teams. Lindberg has proven to not be able to either get into or stay in the Golden Knights lineup and his scoring has diminished basically every year of his career. He has some upside, and a heck of a pair of hands, but if push comes to shove, he’d probably get through.

So, my official guess as to what happens if it comes to it is that they’ll waive Lindberg first and then Carpenter second.

Ok, cool, but let’s talk about where Pirri plays

At this point, he appears to be staying on the 2nd line with Tuch and Stastny, and I agree with this decision. Quite frankly, he’s too hot to move at this point. Plus, Pacioretty and Eakin had some success together, maybe they can rekindle that on the 3rd line.

However, I do not expect this to be the long-term plan. Eventually, Pacioretty will get his chance back on the 2nd line and when it happens, expect him to stay there.

Well, he’s still kind of a mystery, but he’s been described as a power forward with great hands and quite a bit of offensive upside. So, that seems to fit in great on a third line with Eakin and Pacioretty/Pirri, but it doesn’t seem to make as much sense with Eakin and Nosek/Carpenter/Lindberg. Time will tell on him and he’s going to have to make an impact quickly, otherwise, his stay in Vegas may be short.

The 23-man NHL roster limit is lifted on February 25th. So, unless you think Haula is coming back before then, and I definitely don’t, there’s not much to worry about here.

Got it? If not, post whatever questions you still have in the comments and I’ll be sure to answer them.