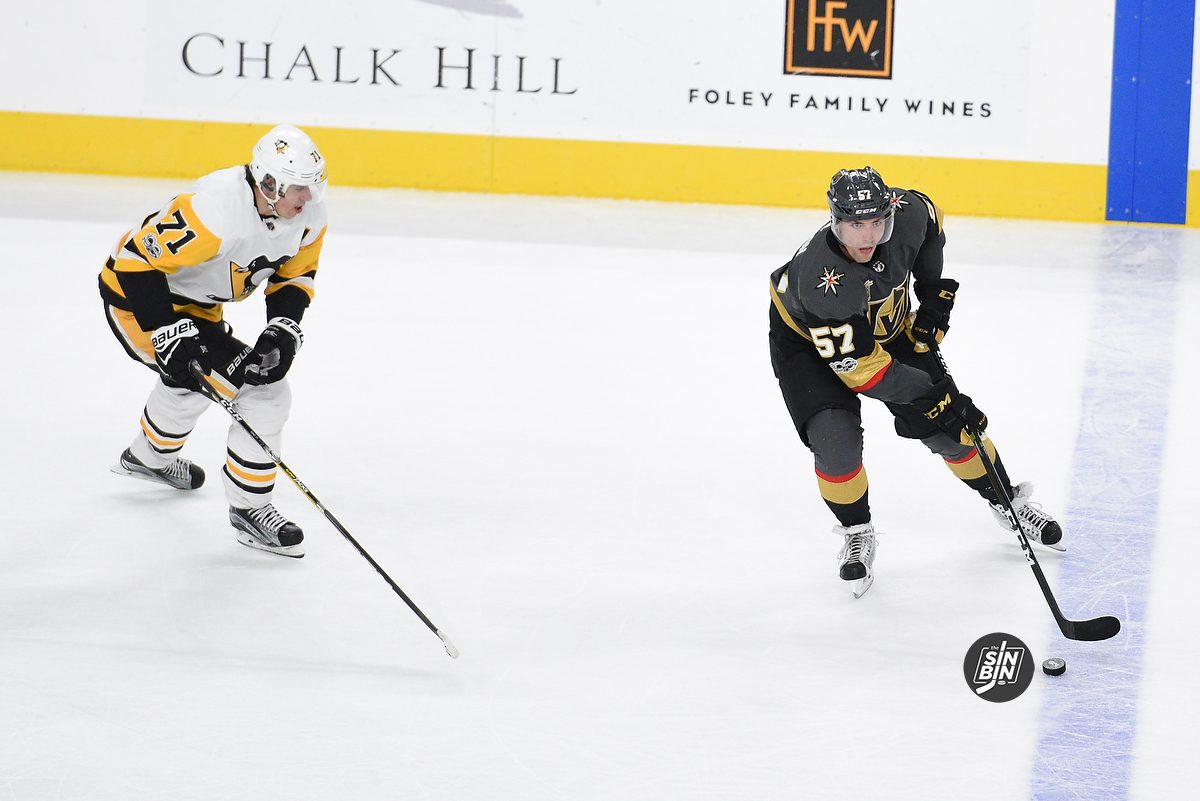 David Perron last played on March 26th in a home game against the Colorado Avalanche, the day the Golden Knights clinched their playoff berth. He missed the next six regular season games, missed Game 1, and has officially been ruled out for Game 2 of the series tonight.

David’s skating every day and he’s getting close and he’s feeling better. It’s just a matter of him you know being ready to go when he’s ready. We don’t force players into the lineup, we make sure they are ready. -Gerard Gallant

Following the game on March 28th, the first one Perron missed, Gallant was coy about Perron’s absence saying only “he didn’t play tonight.” Leading into the second game he would miss on March 30th, Gallant said he was out for “maintenance.” Then on March 31st, when SinBin.vegas flat out asked Gallant, “is David Perron hurt?” the response was “Yes, it’s a minor injury.”

Perron returned to the ice for the Golden Knights practice leading up to Game 1 of the series, but he stayed on the ice after practice with the other three players who were expected to be scratched. Yesterday, on the off day, Perron participated in a practice with the same players, a group of all the guys who did not play in Game 1. This morning, Perron was once again a full participant in morning skate but stayed on the ice well after with the other players to be scratched.

Throughout the entire 18 day absence, Perron has not been made available to speak to the media in English, he did conduct a scrum style interview with French-speaking media yesterday.

The injury has never been declared as upper or lower body, we cannot find anything in the Colorado game that points clearly to the injury, and watching him on the ice recently no one would never have any clue that he’s not healthy enough to play.

This is the end of the final shift Perron took in that game.

This hit occurred on March 24th. Perron did not miss a shift in the game and played the entire game two nights later.

Perron missed one other stretch of time spending time on IR, missing 14 days and six games before returning. Prior to returning from that injury, Perron skated for over a week before returning to the ice to play in a game.

So, the Golden Knights will hit the ice again tonight without one of their most important players, one with a unique skill set on their roster, and arguaby the unnamed captain of the team, but so many questions remain unsanswered while he sits out.

What actually happened to him? When did it happen? How close is he to 100%? Whatever percent he puts himself at, is that not better than Ryan Carpenter at 100%? Who is making the call on when he is ready to return, Perron or the trainers? What do the other players think of an alternate captain, and a player who has acted like a captain all season missing two playoff games?

David Perron’s career has been wildly successful, until the playoffs roll around. That’s one of the reasons he has bounced around teams and was left unprotected at the Expansion Draft. Now, the playoffs are here for his new team, he’s not available, and we don’t know why. It’s not a good look.

Selfishly, I want to give Perron the benefit of the doubt based on the season he’s had both on and off the ice with the Golden Knights. On multiple occasions I’ve made the argument he has risen to be the de facto captain of the team this year, that he should be re-signed, and made the first actual captain in team history, but missing playoff games with an unknown injury while skating and looking good during practice makes it tough. Especially because no one within the organization will give even the smallest shred of detail as to what the injury actually is or its severity (as in the norm for most of NHL teams).

It’s a dangerous game to compare injuries, even more so when this one remains a mystery, but William Carrier is set to return to action without missing a single game after taking a hit that caused Drew Doughty to be suspended, Pierre-Edouard Bellemare almost lost an eyeball and had to be stitched up during an intermission, and he barely missed a shift, and James Neal played a major role in last year’s playoffs with a broken hand that had to be surgically repaired after the Stanley Cup Finals and he never missed a game.

The Golden Knights won Game 1 and they are favored to win Game 2 with Doughty out of the Kings lineup, so no damage has been done with Perron out yet, but every game day that passes without him on the ice, it looks worse and worse, and there’s no much we can do but speculate the worst.