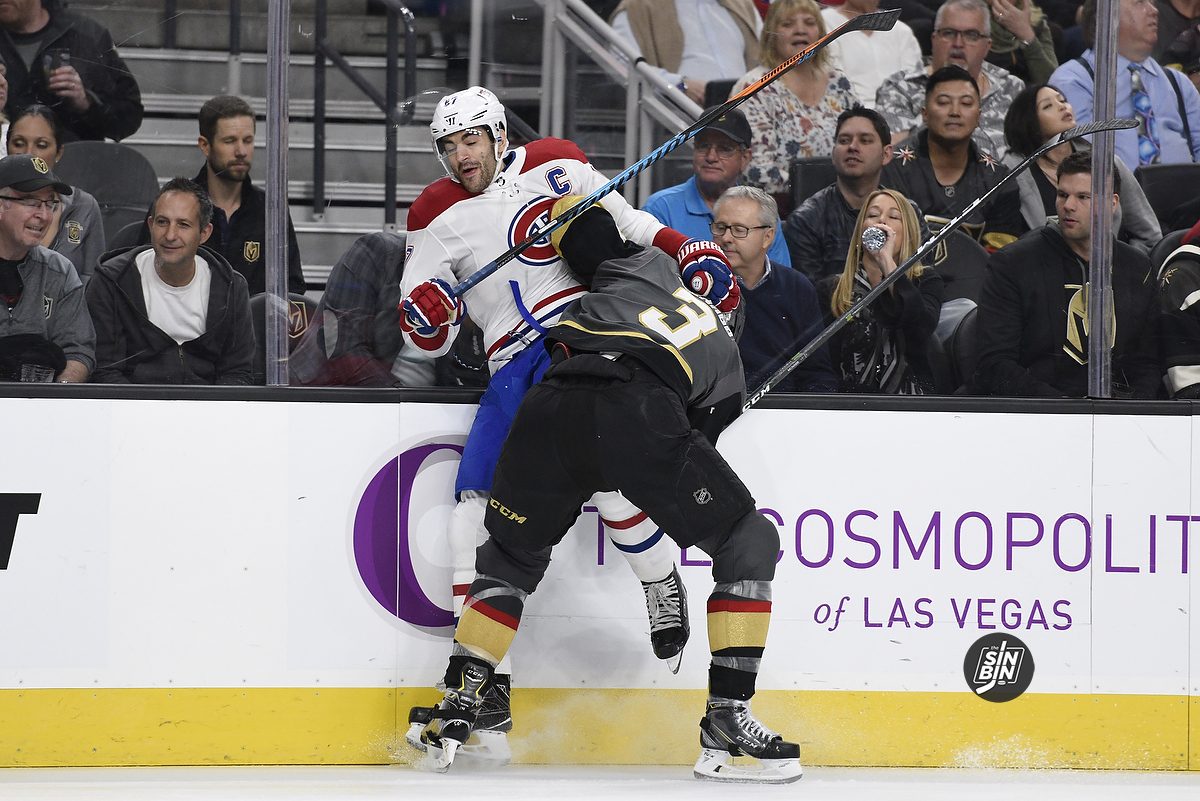 Max Pacioretty is a bonafide star in the NHL. He’s scored 30 goals five times, been named an All Star three times, won the Masterton Award, and was named the captain of one of the most historic franchises in the NHL. When you dig even deeper into the stats you see that he’s a legitimate two-way winger who instantly makes the Golden Knights better both offensively and defensively.

So, the question you have to be asking is, why would the Canadiens ever let a guy like this go? To answer it, let’s hop into the SinBin.vegas time machine! (Don’t be scared, it’s really just us listing a timeline of events from newest to oldest.)

September 7, 2018
Pacioretty tells TSN Montreal that he has never asked to be traded and talks about Vegas

Everyone saw what Vegas did last year as a team… They were building a foundation from the ground up. They didn’t have any plans to make the Stanley Cup finals, and no expectations to do so either. Look what they were able to achieve. – Pacioretty on 9/7/18

I have to do my best to just completely block it out. Completely ignore the noise. -Pacioretty 9/7/18

September 5, 2018
Sportsnet’s Eric Engels reports Pacioretty will not talk contract negotiations with the Montreal Canadiens during the season

As a friend, I hope Max Pacioretty’s situation is resolved soon. He has shouldered one of the toughest jobs in hockey wearing the C for the CH, taking responsibility and blame for things beyond his control. At the same time being one of the top goal scorers in the game.

The problem for Bergevin is he’s been trying to trade Pacioretty for months and so far it hasn’t worked. So the other 30 general managers know Bergevin is desperate because it’s almost unimaginable that the Habs captain will start the year with Montreal. The other GMs can offer less than market value for him, knowing full well that Bergevin doesn’t have much room to maneuver. What I’m hearing from very reliable sources is that Canadiens management has been unhappy with Pacioretty for a while. -Brendan Kelly, Montreal Gazette

July 10, 2018
The Athletic reports Montreal will not offer Pacioretty a contract extension

Agent Pat Brisson indicates he's parted ways with Max Pacioretty. No longer his agent. No hard feelings but a mutual decision both felt made sense at this time.

The deal was done… Max got a call from (general manger Marc Bergevin) telling him that he had been traded to the Kings. But the trade was conditional on Max signing a long-term deal with L.A. – Montreal Gazette source

April 9, 2018
Pacioretty states he won’t return to Montreal if he is stripped of his captaincy (later he rejects that report)

April 7, 2018
Canadiens season ends after failing to qualify for the postseason

February 28, 2018
Sportsnet’s Elliotte Friedman reports Pacioretty was rumored to be traded to Florida, LA, and Minnesota

I think he’s frustrated, yes. I think it’s hard for him to hear his name every other day. And by the way we didn’t put his name out there. Alex Galchenyuk for one, has been rumored for two years and he’s still a Montreal Canadien.- Marc Bergevin, Montreal GM

October 25, 2017
Pacioretty scores his second goal of the season after an eight-game drought

April 22, 2017
Canadiens season comes to an end after losing to the NY Rangers in the first round of the playoffs

September 12, 2016
Rumor surfaces that Canadiens head coach, at the time Michele Therrien called Pacioretty “the worst captain in the history of the organization”

July 28, 2016
Pacioretty reacts to trade of P.K. Subban to Nashville

Very strange for me to see something like that happen… P.K. is the person I got drafted with. He was the only remaining player I got drafted with. I’d been with him for nine years, so it’s going to be very strange to come into the locker room and not see P.K. there, joking around with him all the time…That’s what happens after you have a rough year: changes are made. – Pacioretty on 7/28/16

June 30, 2016
Media and fanss suggest the captaincy should be stripped from Pacioretty and given to newcomer Shea Weber.

They’re going to have to do some soul searching here. They better make him (Weber) an alternate, I’ll tell you that. -Pierre McGuire on TSN Montreal

April 11, 2016
Pacioretty and then teammate P.K. Subban dispel rumors there was a power struggle between the two Canadiens

If you guys could bring the cameras into the wives’ room and see P.K. playing mini-sticks with my son after the game I don’t think I’d be asked this question. What do you want me to say? P.K. Subban came to my wedding. I think you guys are looking way too far into this. – Pacioretty on 4/11/16

The guy deserves the award and he got it… I voted for him, so I don’t know what the big deal is. I can say till I’m blue in the face: we like each other, we play together, we respect each other. But what? Do I have to go over there and make out with him? Katia (Pacioretty’s wife) might have a problem with that. A hug, that’s as far as I’ll take it.” -P.K. Subban on 4/11/16

May 5, 2013
Pacioretty and then teammate P.K. Subban get into a verbal fight on the bench

October 4, 2011
Pacioretty and then teammate P.K. Subban have an altercation during practice.