Let’s first start off with a very important disclaimer. I am not a coach, and I’m not qualified to be a coach, and I probably never will be. Gerard Gallant, on the other hand, is a coach, and was a player, has done it for a long time, so his opinion should probably hold a bit more weight than mine.

I think the guys really battled, against a good, strong Boston team. It was a bounce here and a bounce there that was the difference in the hockey game. I thought it was a real good hockey game that we didn’t get points out of but we probably could’ve. -Gerard Gallant 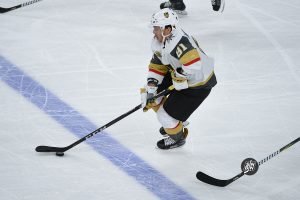 Gallant seemed pleased with the Golden Knights performance, regardless of the outcome. The Vegas coach liked his club’s effort, especially following two awful finishes in New York. However, Thursday’s “promising” play resulted in a third consecutive Golden Knights defeat. Which leads to my dilemma. Gallant thinks his team played well enough to win, I disagree.

Don’t get it twisted, I’m not calling out effort, instead, I’m calling out strategy, and maybe even skill. The Golden Knights looked like a team struggling to get anything going which hasn’t been common for this team. They skated for long stretches without shots or pressure on Bruin’s goaltender Tuukka Rask. Pierre-Edouard Bellemare, Jonathan Marchessault, and Alex Tuch were the only forwards to register a 1st period shot. In the middle frame, the Golden Knights turned the puck over four times in a matter of three minutes. Two such giveaways were on a man-advantage situation. And the 3rd period it just never really felt like Vegas’ goal would come because of a lack of chances, and sure enough, it didn’t.

Gallant was noticeably frustrated after Tuesday’s loss to New York. He even went on to call Vegas an expansion team. After Thursday’s 2-1 loss in Boston the head coach had a much more positive message.

We talked about the last two games, giving up six goals in both of those games. You’re not going to win on the road, or anywhere, when you give up six goals. -Gallant

I won’t argue with Gallant, Vegas played better in that regard in Boston. Yes, they gave up four fewer goals, but did they play well only because they didn’t allow six goals?

I thought our team played a smart game, a strong game on the road. We just fell short. The difference is their puck went in behind the goalie, and Nosek’s didn’t. So it was a pretty close game. -Gallant

The Tomas Nosek almost goal could have changed everything, that’s for sure. If Boston’s Paul Postma doesn’t make a great individual play, the game probably goes to OT, and we’re all singing a different tune. Let’s face it, those are the type of bounces the Golden Knights benefited from during their 8-1 run. Call it puck luck, or whatever, Vegas had many things fall in their favor, but being one bounce away, when you simply didn’t create enough of those bounces, doesn’t count for me after a loss.

It was one of those tight games, where both teams could’ve had three or four, but the goaltending was good. So it was a good solid game. The guys are proud of the game tonight. -Gallant

Allowing four third-period goals will piss of any coach, but so should losing three in a row. I didn’t see a team in control of the game, or a team that possibly could’ve scored three or four goals. Goal differential isn’t always the storyline.

Maybe playing their third game in four days caught up with them. Maybe these road games are going to be that much more difficult. Maybe they were a bounce away from taking home a point. We don’t know exactly, but we do know that the 8-1 Golden Knights, are now 8-4 and are staring at 8-7 if things don’t change in a hurry.

It’s just my two cents, but I can see skilled teams preying on the Golden Knights tight style of play. Vegas is 0-3 on the road trip, and they’ve given up 14 goals. Let’s see how they adapt and get back to generating the offense they’ll need to win in this league.

Playing a defensive low scoring game might be ok Saturday in Ottawa, but it won’t cut it in Toronto on Monday.