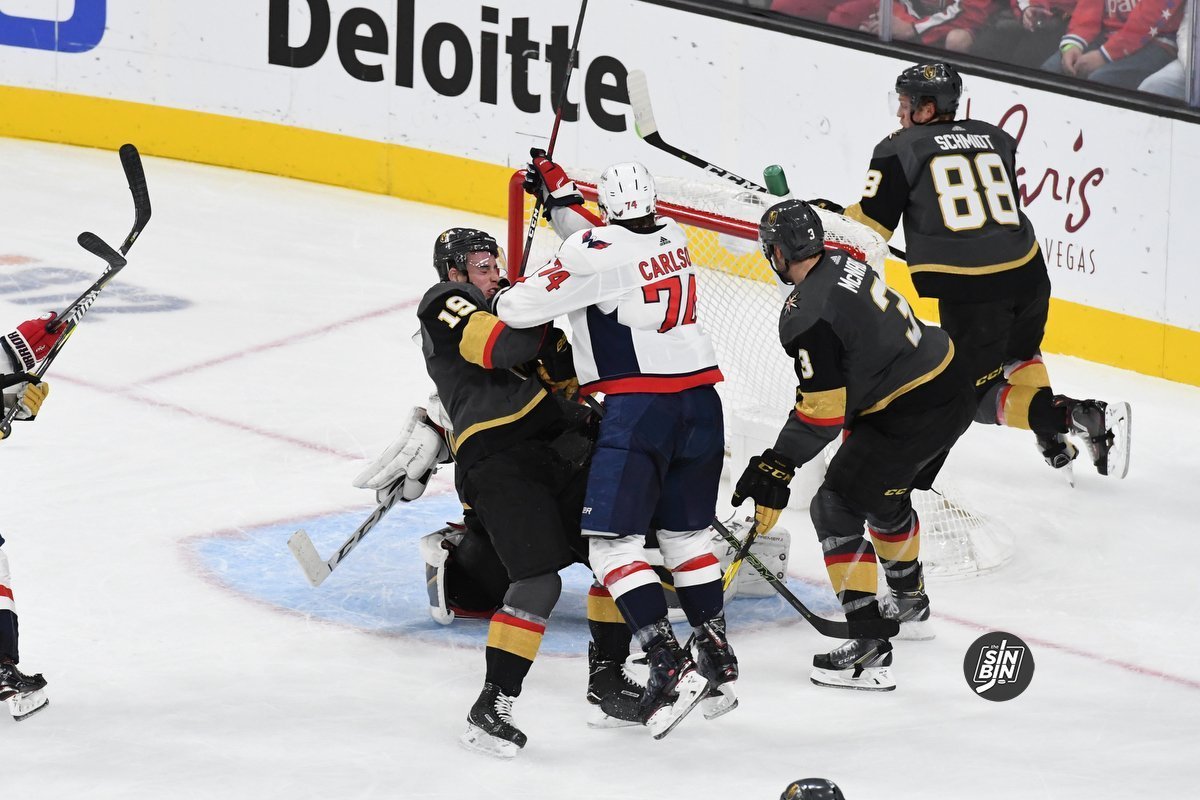 In a year of inconsistency, there has been one constant in the Golden Knights game throughout the first 29 games. It’s the league’s 2nd ranked penalty kill which just so happens to be the #1 PK at home and has killed 20 straight penalties at T-Mobile Arena.

The Golden Knights have killed penalties off at an 85.2% clip and are well over 90% on home ice, but never, and by that I mean in the history of the franchise, has the PK shown up bigger than it did on Tuesday night.

Following the Ryan Reaves ejection, the Capitals, who already had a 2-1 lead, went on the man-advantage for five minutes spanning over two periods. Not only did the Golden Knights kill it off, they barely even allowed a scoring chance. Vegas went on to kill two more penalties in the 3rd amassing a perfect 5 for 5 kill against a team scoring on more than 25% of their power plays.

It was big. Obviously, we had killed one of the best power plays in the league tonight. The guys responded because they were trying to pick up Ryan. They did an outstanding job. I think there was two more in the third period that they had to kill.  I think we killed nine minutes of the 15-minute span there between the second and the third period and we did outstanding. -Gerard Gallant

Despite spending just short of 11 minutes at 5-on-4, the Capitals mustered up just three shots on goal. According to NaturalStatTrick.com, Washington had just one scoring chance on their five power plays and not a single high-danger chance.

That’s a lethal power play there, I think we did a really good job of forcing pressure down ice and kind of rattling them and when they got into the zone they were kind of tired or mishmashed or not enough guys up on the ice. That was big for us momentum-wise, big for our penalty kill, big for our team. -Eakin

Aside from one shot from Ovechkin’s office and another from nearly the same spot that John Carlson missed, the Capitals PP spent most of the time trying to enter the zone, changing players, or struggling to fan the puck around to Ovechkin. It was essentially the perfect game penalty killing for the Golden Knights.

Sometimes you have the right bounce and right now every unit is really tight with each other, each guy knows how the other guy on the unit plays. It makes it easy because it removes doubts when you skate to try to get an opening. It makes the entire PK looks faster as opposed to when you doubt yourself. -Bellemare

But killing five penalties is one thing, killing off a five-minute major following an incredibly emotional moment (Reaves nearly killing Tom Wilson) is another, and it didn’t stop there. After Vegas took the lead back, they had to kill two more penalties to maintain the lead.

It was incredible, I thought our guys did a fantastic job. Flower had a couple of good saves as well. Sometimes those parts of the game are so instrumental to what you want to do as a team. There are times in a game where you look at it and say okay we are in this game with a five-minute power play against a team with the best power play in the league for the last however many years. It’s a challenge and our guys were excited for it. It was one of those things we took pride in and I know are group had that feeling if we could go out there and kill it. We will have a lot of momentum for the rest of the game. -Schmidt

Great power plays, average power plays, bad power plays, it hasn’t matter, the Golden Knights have succeeded against them all. They’ve allowed multiple power play goals in just two games (@CGY, @WSH) and have shut out the opposing power play in 20 of the team’s 29 games.

We’re paying attention to details. I think we are skating and pressuring as much as we can and not giving them too many opportunities to set up and to get out of their zone sometimes and when we need a save Flower is there every time. -Eakin

The Golden Knights know they’ve been good, but they’re also aware of how fragile the PK can be.

Do you agree that the PK has been the most consistent aspect of this team? -SinBin.vegas

(Pause to think) Yeah… Yeah, throughout the whole season we’ve had ups and downs but they haven’t been really really… I’m going to knock on wood right now (knocks on locker stall) deep. I think that we’ve been managing really good. -Bellemare

Tonight, the league’s worst power play comes to town. Chicago is scoring on just 12% of their power play opportunities. It should be a major advantage for the Golden Knights, as it is every night, as long as that knock on wood worked for Bellemare.