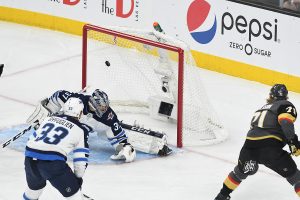 In Game 3, Hellebuyck’s blunder behind the net turned into a James Neal game breaking goal. Remember, this was :12 seconds after Winnipeg tied the game.

Hellebuyck’s gaffe could be looked at as the turning point in the series. NBC’s Keith Jones agreed that the Jets goaltender has shown flaws in his game throughout the WCF.

It’s tough to place blame on Hellebuyck for Winnipeg’s sloppy play over the past three games. However, in this series he hasn’t shown the ability to cover up mistakes like his counterpart Marc-Andre Fleury. The Golden Knights commit turnovers as well, but their goaltender is playing at higher level. Fleury is able to get Vegas out of tough jams, and rarely mishandles the puck.

#29 didn’t play enough regular season games to be playing Vezina hockey, but now, he’s playing Conn Smythe hockey. Fleury doesn’t want to wait for his trophy like Hellebuyck will. The Conn Smyth gets handed out after the Cup gets raised.