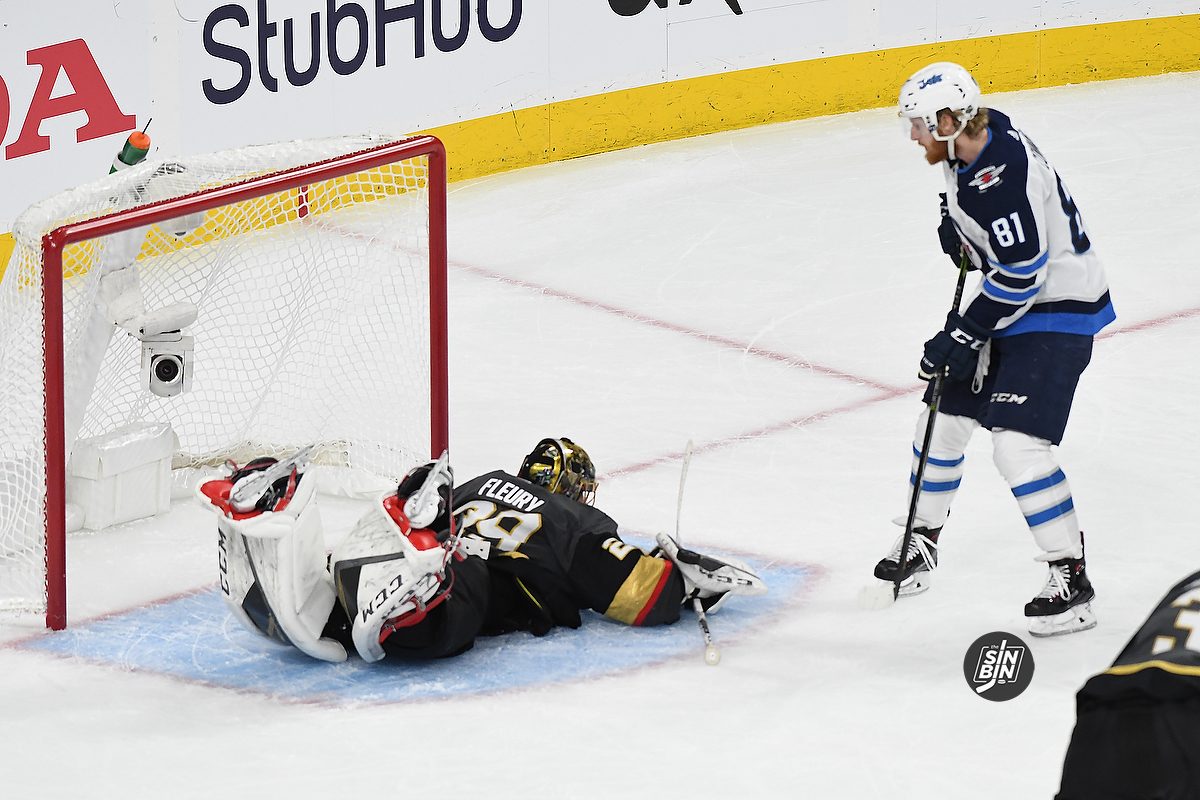 The aftermath of two of the best saves Marc-Andre Fleury made all season. (Photo Credit: SinBin.vegas Photographer Brandon Andreasen)

Unless you are compiling unbelievable saves by Marc-Andre Fleury, the 3rd period of Game 3 will not make any of the Golden Knights highlight reels. Instead, they’ll probably want to find the film and burn it, or at least the first 14 minutes of it.

:18 in the Jets got on the board cutting the lead from 3-2. Then, they spent the next 13:42 harassing Golden Knights defensemen, dominating the neutral zone, and peppering shot after shot after shot on Fleury’s goal.

There was a lot said… It was 3-2 and they kept on pushing us and pushing us and Fleury had to make some great saves. There was a lot of chatter on the bench saying, ‘Let’s get it going here again boys.’ The first two periods we played really good hockey and then it just seemed like we didn’t have any legs in the third period.  -Gerard Gallant

The Golden Knights looked slow and at times timid. They appeared unsure trying to break out of their own zone and were forced to ice the puck six different times in the 3rd period alone. The final stats in the 3rd were staggering. The Jets led 26-15 in shot attempts, 14-7 in shots on goal, and an insane 8-0 in high danger scoring chances according to NaturalStatTrick.com. The score, however, was 1-1, mostly because of Fleury, but also because of a shift that occurred with six minutes to go.

We were flat all period. Around the six minute mark we got a chance, the crowd started getting into it. We started getting our energy back and our legs back. -Brayden McNabb

That chance, which happened at exactly the six minute mark, was a shot off the post from William Karlsson. From that moment on the Golden Knights seemed to get the game back under control. Of course, trailing by a goal the Jets weren’t going to go away, but unlike the first 14 minutes, the Golden Knights had their skating speed back. They were winning to loose pucks, they were breaking out of the zone by passing rather than chipping the puck out, and most of all, they were creating chances in the Winnipeg zone to relieve the pressure.

We calmed down. There were a couple words said on the bench to just relax and breathe. We had that goal lead and there’s no reason to panic. -Shea Theodore

The Golden Knights have always been dubbed a team without a superstar, yet in Game 3 of the Western Conference Finals, when everything was going wrong, their superstar goalie made 15 saves in the 3rd period to hold a one goal lead, and their superstar center created a chance that turned the tide of the game.