Well that didn’t take long. Not only is The Creator no longer the newest owner in the NHL, he may not even own the newest team soon enough.

Absent of some really cataclysmic thing that happens with the rink, or the owners, or some extraneous thing we’re not aware of, the 32nd team in the league will be Seattle. -Bob McKenzie, TSN Vancouver

Now that the cat is out of the bag, let’s bring up the obvious. The Golden Knights early success helped speed up the Seattle process for the NHL.

Of course it is. The Golden Knights have 35 points after 27 games, and they’re 11-2-0 at home. Potential owners in Seattle are salivating with the early return happening in Las Vegas. Future NHL owner Jerry Bruckheimer (who tried multiple times to put a team in Vegas) hasn’t been this excited since he read the script for Con Air.

It feels like (NHL) are almost tripping over themselves to get to the door to make the next move. There’s an excitement to Seattle. They’ve long coveted this market. -Ray Ferraro, TSN Vancouver

The NHL favored Southern Nevada over Quebec City because of its uniqueness and financial security. Las Vegas has its strong tourism industry, and Seattle has its strong tech industry. In the eyes of the league, the demographics of each city make for lucrative NHL markets.

The league forever, even before Vegas was an idea… even if the league will never admit this, I can tell you, the league has always been intrigued with Seattle. -Pierre LeBrun, TSN Ottawa

The Golden Knights will someway be effected by the Seattle expansion. The NHL could be forced to realign the four divisions. In that case, Seattle will most certainly be in the Pacific Division along with Vancouver, and the three California teams. I’m also assuming the league won’t break up the Canucks, Flames, and Oilers rivalry. That leaves Vegas and Arizona as teams that could be moved to the Central Division. I’m guessing, the Coyotes would get the boot. However, that’s not the issue The Creator and George McPhee should be most concerned with.

They’ve already got the blueprint for the Expansion Draft. They’ve done it, a one team expansion… it’s been suggested to me that the guys is Seattle will say ‘Well Vegas paid $500 million and they got those expansion rules. We’re paying $650 million, maybe we need to get even more favorable terms on the Expansion Draft.’ Wouldn’t that be funny, Vegas losing players to the Expansion Draft. After holding everybody in the league up last year. -McKenzie

No Bob, that would not be funny at all. 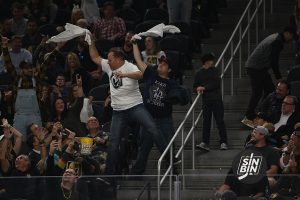 Can we offer up this guy in the 2020 Expansion Draft? (Photo Credit: SinBin.vegas Photographer Brandon Andreasen)

McPhee strong-armed his way through the Expansion Draft and ingeniously ripped off 30 NHL teams, only to pave the way for Seattle to have a perfect Expansion Draft. McPhee broke the code so Seattle’s GM can do the same to him. Before the 2020-2021 season, the Golden Knights could be forced to forfeit one of their valuable assets.

Vegas began play in 2017-18. The Seattle franchise is currently pegged to play in 2020-21 which would put the Expansion Draft in June of 2020. History says teams are exempt for one to two years after their Expansion Draft, but there’s no precedent for a teams entering the league three years apart.

If the Golden Knights are not exempt, it’s clearly not ideal for the Creator/McPhee playoff plan. Plus, if the league approves “more favorable terms” to the Seattle franchise, it could result in a lower draft pick for Vegas. I hate bringing it up, but McPhee has to take advantage of the trade deadline this season. Sorry Vegas fans, but The Creator doesn’t want to watch Seattle raise the cup first.