Overall, it wasn’t a great weekend for the Golden Knights. They were unable to secure more than three points on their three-game road trip. The Kings, Predators, and Stars all won games as well. Time is running out. So, after an unrewarding weekend the Golden Knights need to quickly find consistency in their game and will need a little luck along the way as well. 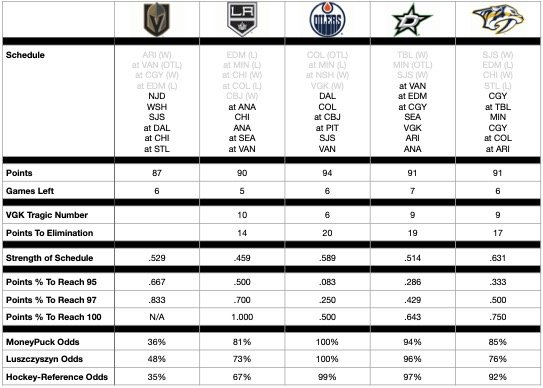 Let’s start off positive. The Golden Knights play the 26-42-7 New Jersey Devils tonight at home. NHL computer models predict Vegas will defeat New Jersey fairly easily, so tack on two points to their total. That places them with 89 points, one point behind LA, and two behind Dallas and Nashville. With five games left that keeps Vegas in the hunt. At this late stage of the season that’s all you can really ask for.

We knew we weren’t going to run the table. We talked about that two weeks ago. We were going to drop some points along the way. We’re still right in the thick of things. -Pete DeBoer

After tonight’s game against the Devils, the Golden Knights schedule becomes more demanding. On paper, Vegas has the lineup to win out. Mark Stone and Max Pacioretty’s legs and lungs are building back to form. Thinking optimistically, if they contribute in all remaining games the Golden Knights can win most, if not all.

When you break down the rest of Vegas’ schedule there are games they should win and games they could win. It’s fair to give the Golden Knights the edge against the Devils, Sharks, and Blackhawks. Potentially, Vegas will have to worry about a motivated San Jose team who would love to play the spoiler role. Then again, the Sharks have a lifetime record of 4-15-3 versus the Golden Knights.

There’s a debate as to who’s the favorite in Vegas’ other three matchups. What will be the Washington Capitals approach to a late season, non-conference road game having clinched a playoff berth already? The game is relatively meaningless for Washington and only care about staying healthy for their projected first round matchup with the Florida Panthers. It’s possible Washington has a soft spot for T-Mobile Arena and decides to play like a Stanley Cup champion on Wednesday night. It’s also possible they take advantage of a trip to Las Vegas and hockey is secondary for a night.

There’s no question Vegas’ game in Dallas will be a challenge. It’ll be like a sixty minute playoff series and might be the most entertaining game of the season. That leaves St. Louis. The Blues have qualified for the postseason and it’s their final regular season game as well. St. Louis GM tipped his hat on what type of effort his team will give.

You see a hard charging Vegas team. If they get in, that doesn’t seem like a great reward for finishing first or second to play Vegas in the first round. -Doug Armstrong, Blues GM

Now it’s time to come back to earth. To win all six remaining games Vegas will have to be flawless. Coach Pete DeBoer will need his team to execute the best hockey they’ve played since the 2021 second round series against Colorado. That’s a steep climb.

In order to get successful results the Golden Knights will not only need consistent high-level performances but they’ll need the Kings to drop a few. In LA, they’re quite aware of their situation and they feel the Vegas nipping at their heels.

We’re not a high-scoring team. We’re comfortable in one-score games, tight games. It felt like we were playing the type of game we needed to play. -Todd McLellan, Kings coach

Most likely it’ll come down to the two paths Vegas and LA are on. Each have a back-to-back remaining on their schedules and it may come down to which handles it better. Will Robin Lehner be healthy enough to play in one or will Logan Thompson start both? Those decisions could be the difference between one point in, or one point out.