A report from SB Nation showed a 164 page document appearing to deny the Vegas Golden Knights trademark that was filed to the U.S. Patent and Trademark Office (USPTO) on August 23rd.

The Creator quickly responded to Channel 3’s Amber Dixon refuting the claim, and then the team put out this statement first acquired by Alex Prewitt.

When the news broke, many representatives from the organization were making appearances at Born and Raised for the premier of the Behind The Vegas Ice documentary. Everyone declined to do interviews, and the only information we were given was, “our lawyers are looking into it.”

The Las Vegas Review Journal was able to reach VP Murray Craven for this comment.

We believe, at the end of the day, all parties will embrace the fact that we are the Vegas Golden Knights and this absolutely will work out. I hope people don’t overreact to this at all. We believe everyone will be satisfied. We are only going to enhance the name Golden Knights for everyone. That’s our goal. I won’t put words in Bill Foley’s mouth, but we all believe this will be fine. -Murray Craven, Senior VP

The trademark was denied due to it’s similarity to the College of Saint Rose Golden Knights.

Accordingly, the examining attorney finds that the marks are identical in part, sharing their most dominant and source-identifying portions, and are confusingly similar when compared in their entireties. -USPTO Denial Letter

The denial basically rules that the College of Saint Rose and Vegas that proceed the words Golden Knights “does not change the overall commercial impression,” of the two names.

They go on to cite that collegiate sports and professional sports are “similar nature, both often televised, played at the same large arenas for the entertainment of the same class of consumers.” And despite the fact that the College of Saint Rose does not have, and has never had, a hockey team, their trademark is “presumed” to include all sports played at the collegiate level.

The Vegas Golden Knights have six months from the date of the denial (which is not listed) to make an argument for their trademark.

The NHL released this statement on Thursday morning… 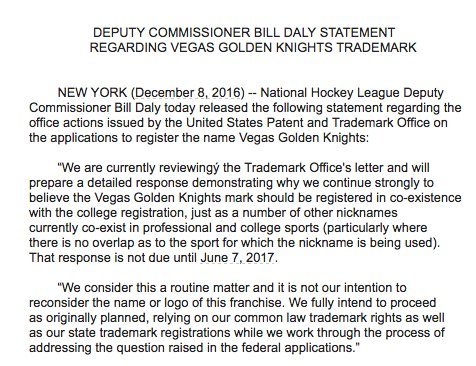 That’s where the fact end, and here is where the blog portion of this site comes in. When this article was originally published on December 7th at 10:00 PM this was my statement.

SinBin.vegas will stick with this story and have much more when we get it, but for now know this, it’s almost certainly nothing more than a bump in the road. The chances of the team being forced to change the name remain incredibly slim.

I’m going to change my tune a little bit, so hear me out.

First off let’s make this one thing abundantly clear, I, Ken Boehlke, am NOT a trademark attorney. I did not study law, I do not particularly understand law, and honestly I am still not 100% sure what is going on here.

In this fabulous time we live in everyone likes to jump to conclusions about what was done and what should have been done as if they have a true knowledge of what actually happened.

When the Expansion Process was going on we were all crying and asking why it was taking so long. Then they got the team and everyone freaked out that it took five months to finally announce the name. Now they have a name and people wonder how they can possibly run into issues with a parachute team or a small college in Albany, New York.

I tried to do the research, and I had a hard time finding how common trademark denials are, and an even harder time finding how common reversals of denials are. I tried to compare the marks and make a judgement for myself, but quickly realized whatever decision I come to means absolutely nothing. I attempted to find similar cases, to educate myself and in turn anyone reading this, but leaned there’s no point. So I stopped, and I thought about other things I had a hard time tracking down.

Why did it take so long for them to award Las Vegas a team? How could it have possibly taken five months to come up with a team name? I remember conversations I had with friends asking ourselves all sorts of questions to which we just could not come up with rational answers. Then this happened. The trademark got denied, and it kind of all hit me.

We are dealing with incredibly smart people have a FAR greater understanding of what’s going on than we do, and more importantly, have done this before. Yet when they say it’s all going to ok and that this is not out of the ordinary, we jump all over them and for some reason believe we know better than they do.

What I do know is that we’ve been consistently told by both the league and the organization in Vegas they put in the work to ensure the name would be acceptable to use. These same people took five months to unveil that name, and they all stood on a stage together in front of 5,000 people and delivered the news. News they believed in. News they’ve since thrown millions of dollars behind, and claim is going to be fine.

Yet when one woman, who we’ve never heard of, and represents a group we previously never knew existed of says, “we’re looking into it,” we all jump ship and side with her. Then, a random attorney offers an initial ruling, in a format very few of us can even begin to understand, and his (or maybe her) word is the Gospel.

It’s time we learn from our recent history and take a different approach this time around. Don’t get me wrong, I’m guilty of it too. Scroll back through the archives of SinBin.vegas and you’ll find numerous times I bitched and moaned about things I didn’t even begin to understand the whole story behind. And it’s not my fault, just like it’s not your’s or anyone else’s who decides to jump to a conclusion on a very complex subject that not many people in the world truly have a strong knowledge on.

Stop trying to act as if you know the legal rules behind all of this and just be confused. It’s fine. We aren’t stupid.

What’s stupid is putting the two logos side by side and making a judgement for yourself. What’s stupid is scrolling through previous trademark cases acting like we have any clue what in the hell they actually say. What’s stupid is declaring that you absolutely know that this will turn out one way or the other.

My original statement was foolish. I do NOT know that this is just a blip on the radar. I do NOT know if they will have to change, or alter, the name and logos. Because quite frankly, I do NOT know a damn thing about the trademark laws of the United States.

What I do know is that people who have put in the work are telling me it’s not going to change. People who have been there, done that, and know the iceberg is 10,000 feet deep despite the fact that we can only see the 100 feet sticking out above the water.

Don’t form an opinion on a group of facts that’s far short of the whole story. And don’t waste your time trying to educate yourself on a field that’s ridiculously boring and totally unrelated to the reason why you are here. We’re here to be fans of hockey. To be fans of (Las) Vegas hockey. Not to become trademark attorneys.

So don’t try to be an expert. Don’t go trying to educate yourself through Google searches on a topic brilliant people can’t even grasp after years of studying. And don’t go picking fights about a subject deep down you really could not care less about.

Listen to what’s said, consider who’s saying it, and keep waiting until there’s more information to go off. Rather than form an opinion in which the human in you will inevitably want to prove is the right one…

Just be confused on this one and save your opinions for something you actually do actually care about.

Vegas’ First Real Problem; And It’s Not A Trademark