As great as the Golden Knights have looked on the ice and as amazing as the prospect pipeline and cupboard of draft picks look for the future, the Golden Knights management of the salary cap may be their best asset moving forward. 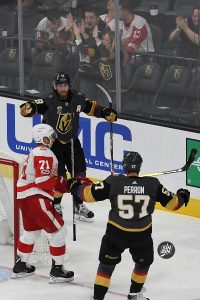 Keeping these two isn’t as far-fetched as it sounds when you look at the Golden Knights cap. (Photo Credit: SinBin.vegas Photographer Brandon Andreasen)

First off all, the Golden Knights sit more than $8M under the cap for the remainder of the 2017-18 season, so, monetarily speaking, nothing is off the table at the trade deadline.

But on to the more important portion of the cap, the future. As of this article, the Golden Knights have a total of 17 NHL players under contract for next season. The total cap space these 17 players take up is just north of $40M. If the cap stays stagnant (which it almost certainly won’t, it’ll probably go up a couple million) that leaves Vegas with about $35M to work with, plus David Clarkson‘s $5.25M that can come off due to injury. So essentially $40.25M.

For the sake of proving a point, let’s say every single player mentioned here has their salary doubled to return next season. That would cost the Golden Knights $38.5M, under the cap by $1.5M.

Yes, that’s with paying James Neal $10M, David Perron $7.5M, Luca Sbisa $7.2M, and Deryk Engelland $2M. None of that is happening, yet even if it did, the Golden Knights would STILL be under the cap next season.

Instead, here are some more likely numbers (still probably overpaying everyone).

That’s keeping everyone. Say just one of Neal, Perron, or Sbisa are out, that would leave the Golden Knights with nearly $10M of free cap space, and having paid every single one of their RFAs. Even if you play with the numbers, paying Theodore and Karlsson more, Nosek and Carrier less, there’s almost no way to reach the salary cap.

After locking up Marchessault and McNabb, and having the long term deals in place for Smith, Eakin, Haula, and Schmidt, the Golden Knights already have a majority of their core pieces locked up, and still have an insane amount of cap room to work with.

Nothing is off the table. If McPhee wants to keep everyone, he can, but if he doesn’t, the amount of room he has under the cap to work with is nearly preposterous, especially for a team that might win the Pacific Division in its first year.

The next player to get a long term deal is likely Karlsson. His deal will probably be in the neighborhood of 4-5M. Then they’ll have to figure out what to do with Theodore, Miller, and eventually Tuch. They are all integral pieces of the team, but none of them will break the bank.

The Golden Knights balance is a huge reason why they are so darn good on the ice, but that same balance is also going to pay off even more off it.

It sure is nice to be a Golden Knights fan, am I right?

SinBin.vegas Podcast #93: All Your Questions