Vadim Shipachyov Describes His Time In Vegas “Like A Terrible Dream”

The only player to ever retire as a Golden Knight is back in the news dropping bombs on the Vegas coaching staff, his agent, and even the city of Las Vegas. Vadim Shipachyov did an interview with Sports-Express.ru which touched on a myriad of topics surrounding his time in Vegas including how and why it all came to an end.

Note: The interview was conducted and printed in Russian so the translations are a bit rough.

I forgot everything that happened last season, like a terrible dream. -Vadim Shipachyov

Shipachyov signed with the Golden Knights on May 4th, more than a month prior to the Expansion Draft. When Vegas’ roster was set, Shipachyov’s two-year $9 million contract had the KHL import as the highest paid center on the team. When he arrived in Vegas, a few weeks before training camp, he was expected to be the Golden Knights’ top line center, and when camp got underway, the eventual Jack Adams winner slotted him on a line with Jonathan Marchessault and Reilly Smith. 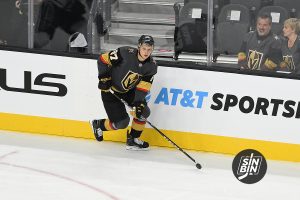 Shipachyov remained on that line through most of the preseason but was left off the Golden Knights opening day roster in Dallas. At the time it was described as a numbers move. Shipachyov was waiver exempt, so he could be sent to the AHL without the possibility of being picked up by another team, which allowed McPhee to protect players like Griffin Reinhart, Jason Garrison, and Calvin Pickard. Shipachyov did not report to the AHL, but McPhee said the team was okay with it. Then, Marchessault and Erik Haula were both injured in the same game. Both were placed on the IR and two NHL roster spots were open. McPhee recalled Shipachyov (and Alex Tuch) and he was played as the center of the third line with Tuch and Brendan Leipsic. Shipachyov played in three games, saw the ice for a total of 32 minutes, and scored one goal. When Marchessault returned from injury, McPhee chose to keep Tuch rather than Shipachyov, and this time Shipachyov was expected to report to the AHL.

He did… for one practice. Then he left and was formally suspended by the team. McPhee allowed his agent to seek out a trade but no agreement was found. Shipachyov then “voluntarily” retired, effectively ending his contract and taking his salary off the Golden Knights books. Shipachyov returned to Russia to his former team, SKA St. Petersburg. By the time the KHL season closed, Shipachyov had fallen out of the starting lineup and was a healthy scratch on the Olympic Athletes of Russia team that won the gold medal. He was not offered a contract by SKA St. Petersburg and will play this season with a lesser team in Dynamo Moscow. “Terrible dream” probably puts it politely.

Yes, a lot of things were written about me. I do not even want to understand it. There was too much untruth. -Shipachyov

Another portion of the Shipachyov “terrible dream” was a mishap at the time he originally signed with the Golden Knights. On May 4th, his contract was announced and he was introduced as a Golden Knight. On May 6th, the contract was voided by the NHL and had to be re-submitted. Reports as to why were that the contract included a “no move” or “no trade” clause that Shipachyov was not eligible for. In other words, Shipachyov and his agent were focused on one thing, making sure Vadim played in the NHL. When he was sent to the AHL, and told he had to report, he less than pleased.

Let’s say I did not know for sure that if you come in the first year, you can send him to the AHL for an indefinite period. Do you know how they explained to me? Like, go to the AHL, where you will earn even more than in the NHL since the contract is one-sided, and the escrow does not need to be paid. I did not understand this because I did not go to the NHL for money. I’m not interested in playing in the AHL. -Shipachyov

It is correct, playing in the AHL on a contract like Shipachyov’s would indeed have earned him more money, but that’s not what he wanted. He wanted to play in the NHL.

When I played three matches, I thought that in the future it will be better. I was ready to be on the ice for ten minutes, in the third or fourth lines. I did not see anything terrible in this. I understood very well that I still needed to get used to the NHL, to adapt. Still, I’ve never played in such a league. And if I were given this time, then I would be used to it. It is clear that in North America the game is played with more power and less space. But I felt I was progressing. -Shipachyov

Gallant and/or McPhee disagreed. However, Shipachyov doesn’t believe he was ever told the truth.

Yes, we constantly talked with the head coach, with an assistant. But you know how it is in America. “Vadim, we are satisfied with everything, then you are growing great, everything is great.” And then they tell me that I’m not needed. (In Russia) they tell you what’s unhappy, they’ll say it in person, and you start working on some things. -Shipachyov

Then when another player (Marchessault) returned from injury, I started having problems. The next day I was told that I can go where I want to go. They were going to trade me. It was said so. The trade can happen either tomorrow, or in a month, or even later. I thought that I absolutely do not want to waste time, to wait for some decision, which, moreover, is still unknown when it would be accepted. Back in Russia, I would play at the Olympics. -Shipachyov

That’s why he retired. It wasn’t about money. It was about playing time, in the NHL, something he hadn’t earned in Vegas, and Gallant was not going to just hand it to him.

If a trade came up right away, he may have gone and played somewhere else because he didn’t mince words on how he felt about living in Las Vegas.

In Vegas, it’s hard to live. You can come here for a week for fun, but it’s impossible to live. We rented a house in a good, I thought, neighborhood, but there’s nothing there, and there is no one. You go out into the street, it’s empty, as if you live alone in this village. Once I took the children to the water park – I had to go through the casino. So I had to clamp my nose with my hands so that they would not inhale thick tobacco smoke. Well, yes, there is the Strip, it is possible to walk along it one way and the other. So what? Gambling does not interest me at all, and there’s nothing more there. -Shipachyov

He also immigrated, with his family, about a month before the worst tragedy in city history. 1 October was unsettling as well.

It was very unpleasant. But this is only one of many factors that I did not like in Vegas. -Shipachyov

Feel free to take this however you wish. Name calling of Shipachyov probably isn’t unwarranted, but here’s the truth, to the best of our knowledge.

The Golden Knights expected to be getting a high-end player. That’s not what they got. Instead, they got a player that admittedly needed to develop his game to fit the North American style. A disagreement over where and how that would happen is what ultimately sent Shipachyov back to Russia. A lot was likely lost in translation, but even if it weren’t, the honest truth was probably not completely conveyed by both sides at all times. So it ended as ugly as it could, with the player leaving and a team wasting an asset other NHL teams coveted. Now, he appears bitter, but the bitterness is probably not one-sided. No one won in the Vadim Shipachyov/Golden Knights saga. It’s over now, and things worked out much better for the Golden Knights than they did Vadim Shipachyov.

I’m glad that I came back, although I’m a little upset that it all happened. From Vegas I brought only the puck (his first goal), which I’ve since abandoned. But a negative experience helps all to realize and appreciate how everything was going in St. Petersburg. -Shipachyov

Let’s just say, Vadim Shipachyov isn’t the Golden Knights greatest ambassador. However, that doesn’t mean his advice for Nikita Gusev, a former linemate and Golden Knights prospect, would be to avoid Vegas at all costs.

Listen, any hockey player who wants to go to the NHL, I advise you to go and try. My example is not revealing. In addition, I was not able to adapt there to some everyday moments. Perhaps another person will find these problems unimportant. -Shipachyov

Hopefully the Golden Knights learned a few lessons too.

SinBin.vegas Podcast #116: Haula, Center Or Not