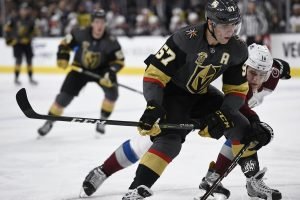 Perron has VGK Captain written all over him, but to wear the C, he has to still be wearing a Golden Knights sweater next season. (Photo Credit: SinBin.vegas Photographer Brandon Andreasen)

As the regular season comes to a close, agents and their unrestricted free agent clients are licking their chops, waiting for July 1st. James Neal and David Perron, two key elements for the Golden Knights success are UFAs this summer.

Sportsnet focused on the latest reports regarding the top UFAs around the NHL. Neal and Perron are considered top ten UFAs available July 1st. The Golden Knights were also mentioned when it comes to prize winger James van Riemsdyk.

Here’s a bit of what they had to say. The entire article is here.

Sportsnet’s Nick Kypreos has suggested that Neal will be asking for as much as $6.5 million or $7 million per season on a long-term deal. Despite having the cap space to make that work, the belief is that Vegas is hesitant to commit long-term to players 30 and older. -Luke Fox, Sportsnet

I think they (Vegas) want to keep him too… More likely than not, they would like to keep him there. If he goes to market, James will command a lot of attention. -Pierre McGuire

McPhee is keeping mum publicly with his plans for these veteran wingers. There is value in keeping Perron beyond 2017-18, but the temptation to let Perron walk and use his cap space on younger, cheaper talent will be tempting. There’s no guarantee Perron produces this well again. -Fox