Two Stories About George McPhee Surface; One Good, One Not-So-Good 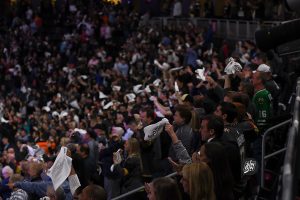 One of our habits here at SinBin.vegas is to scour the Internet for any and all stories about the Golden Knights. Whether they are about ex-players, prospects, coaches, executives, or in today’s case the General Manager, if it’s out there, we find it. George McPhee’s name popped up in multiple places this week starting with an interview on Hockey Central in which he gave an update on Paul Stastny’s status, but that was the least interesting thing we found concerning the architect of the Golden Knights. Two stories worth sharing found their way onto the web, one good one, one not-so-good one.

We’ll start with the good story.

When McPhee was senior in college at Bowling Green the team he captained started the season 0-6-1. They went on to turn things around and win the CCHA regular season and playoff titles and made the national tournament. The head coach of that team was Jerry York. York’s team this year has another McPhee, George’s son, Graham. Graham’s team at Boston College was 0-5-0 and York had McPhee turn to his old man for a little reassurance.

I said ‘Graham, call your dad and ask him.’ It’s still a long year. We have a lot of work to do, but we’ve got a pretty good club. –Jerry York to CollegeHockeyNews.com

You guys have probably never been 0-5-0. You just haven’t. But I’ve been there. Graham McPhee’s father was our senior captain at Bowling Green. We started 0-6-1. I told them I’ve been there, and that this team has a chance to become a very good team for us. Believe me, just because you start 0-5-0, doesn’t mean you have to have a lousy year. -York

A few days later, Boston College won their first game of the season and have won three straight since. Who knows what McPhee actually said to his son and how much of that message made it to Graham’s teammates, but it makes for a good story if we give all the credit to George, so we’re going to do that.

On to the other story, which is not nearly as positive for the Golden Knights GM.

While McPhee was the GM of the Washington Capitals he made a trade that sent Jaromir Jagr to the New York Rangers, for now NBC studio host, Anson Carter.

As the story goes, (you can read the whole thing here) the Capitals arranged a driver to bring Carter to his condo to gather his belongings before heading out to the Caps next game. Carter says he was on the phone with a female hairstylist while in the car setting up a time for her to meet with him to tend to his glorious dreadlocks.

Later, when he got to Washington D.C., Carter was called into the head coach’s office.

He was ripping me about something and later said, ‘We do you a favour to let you get your stuff in New York and you’re taking advantage of flying in broads and partying?’ He probably heard ‘Female, flying in early, on a day off.’ He’s not hearing about her doing my hair. I was pissed. This was an invasion of my privacy. Someone was eavesdropping on the conversation and [the Capitals] either planted this guy … and that was not a good look.”-Anson Carter to CBC Sports

A few weeks later, Carter was traded to the Los Angeles Kings.

Carter says he’s never spoken to McPhee or coach Glen Hanlon since, When the story broke, McPhee was offered the opportunity to respond.

McPhee did, however, comment on the Ottawa Senators Uber video situation on a recent appearance on Sportsnet’s Hockey Central at Noon though.

It’s unfortunate this happened. Players talk about coaches all the time, they just do, whether you are playing well or not, players like to talk about the coaches, it’s not that big a deal. I’m really disappointed this company would allow something like that to go public, to go viral, that’s really inconsiderate. Players do know better, should know better, but we do our best as management people, we have to make sure to be in talks with our social media guys, to sit with the players every year and have a talk with them and we do that. It’s just an example of what can happen and it’s unfortunately but that’s just the society we live in today and you have to be on guard and mindful and lots of people will learn lessons for this. -McPhee

Not entirely sure what to make of any of this, but we found it interesting, so when that happens, we pass it along to you. Do with it whatever you please.

Ok, back to now to your regularly scheduled programming… Max Pacioretty’s return to Montreal.