When was the exact moment the Golden Knights went from an expansion team expected to finish in last place to a dominant force in the Western Conference with legitimate Stanley Cup aspirations?

Coach says the night they got whipped 8-2 by the Edmonton Oilers.

That game showed us a lot about our hockey team. I could be wrong but after that game, I think we won five in a row. The guys really showed a lot of character. Sometimes in a game like that you go the other way, but I think our guys rallied around each other and said ‘we’re better than that.’ That was a turning point in the season for me. 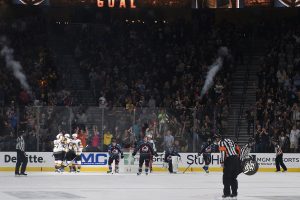 Coach is right, that game turned the season around statistically, but it had a more profound impact on the mental aspect of the team.

That was the first time all year they had really been blown off the ice. It happened on the road, to a desperate team captained by the best player in the world, with a fourth (and eventually fifth) string goalie in the Golden Knights net. It clearly was an aberration and there was no reason to view it any differently, but according to their coach, the Golden Knights did anyway.

They came out and played a great game two nights later in Vancouver, then followed it up with four more wins against the Pacific Division, and haven’t stopped rolling yet.

I could argue for the pair of games in Nashville and Dallas or the win over the Lightning here in Vegas. The win against Winnipeg after the rough homestand or the back-to-backs in southern California. There are a lot of options of when you could say the Golden Knights season turned, but it’s hard to argue with Turk on this one, so I won’t.