Tomorrow night marks the first air date of the second episode of Behind The Vegas Ice, the documentary series chronicling the genesis of the Golden Knights.

The first episode went through the early stages when hockey in Vegas was just a pipe dream to when the team was finally announced. Tomorrow’s is titled “Making A Name for Itself” and its focus is on the ever scrutinized naming of the team. 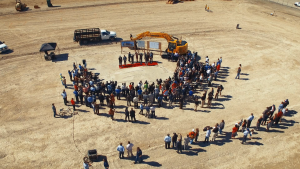 The focus of the show is likely to be on the process of naming the team, but a press release about the episode also highlighted the Practice Facility groundbreaking and one other thing, which I think most readers of this site will find particularly interesting.

In “Making a Name for Itself” the yet-to-be-named Las Vegas NHL team celebrates the groundbreaking of their practice facility in Summerlin with Golden Knights’ owner Bill Foley and community leaders in attendance. Unveiling of the team name and logo during a grand celebration front of T-Mobile Arena. The team’s chief legal counsel provides insight into dealings with the U.S. Patent and Trademark Office. -Cox Communications Press Release

That’s right, they are actually going to tackle the trademark issues and show behind the scenes of what went on the night the news broke, and ironically the night Episode 1 premiered.

It will likely be much more of the same of what we’ve heard thus far, but either way, it’s good to see the strategy is not to ignore, but instead to face it head on. What Peter Sadowski, the aforementioned chief legal counsel, is shown saying is intriguing enough for me to have my eyes glued to Channel 1096 at 8:00 tomorrow night. They also bought BehindTheVegasIce.com, so you can use that to stream it instead of whatever the website used to be. (Or if you’re in Vegas, Born and Raised is throwing watch parties once again.)

That is of course if you are within a 50 mile radius of Las Vegas. Our efforts to have Cox lift the geo-restrictions have ultimately proven unsuccessful to this point.

But believe me, the emails we sent last month were received, heard, and I truly believe the show will eventually be available world wide. But until then, let’s keep making our voice heard. Click the link, and keep the emails coming. Once a month, I want Cox to hear from the SinBin army (we really need to pick a real name for this) to know we won’t give up.

Here’s the promo video for Episode 2, hopefully it lives up to the promise and gives us something to chew on regarding the (still) pending trademark.

Behind The Vegas Ice

Don’t Expect To See A Third Jersey… During The Game