Gerard Gallant is a huge proponent of the “ain’t broke, don’t fix it” mentality. He’s proven it with his lineups over the course of the first 12 games of the season. Following the Golden Knights eight wins, Gallant has made a total of five changes to his line up. Three of the five were made to insert injured players back into the lineup.

Following the Golden Knights eight wins, Gallant has made a total of five changes to his lineup. Following the four losses, 12 changes were made.

Every time the Golden Knights have dropped a game, there has been at least one change to the lineup. One has to ask though if this is too much. Throughout the course of the first 12 games, only the “fourth” line and the Sbisa/Schmidt pairing has remained the same every game. It should come as no surprise that those five players have had some of the most consistent starts to the year.

A few of the changes were injury related, however, a majority were not. The decision to take Brad Hunt out of the game in New York in favor of Shea Theodore was a surprising one. As was the move to swap Cody Eakin and Erik Haula on the Golden Knights “top” line. 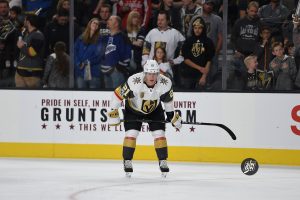 Who am I playing with tomorrow coach? (Photo Credit: SinBin.vegas Photographer Brandon Andreasen)

Thus far, it’s tough to say the moves have paid off for Gallant. The Golden Knights have dropped two of the three games they’ve played following losses, and the most recent set of changes seemed to take some of the juice out of the Vegas attack.

The oddity in the “ain’t broke, don’t fix” theory is that a Gallant has acted as though a single loss means “it’s broke.” The team jumped out to an incredibly hot start, were getting all the bounces, and then ran into a roadblock against the Islanders. Changes were made, it got worse. More changes, even worse.

We’ll see what the lineup looks like in Ottawa tomorrow morning, but the best guess is more changes, hopefully this time the desired change in result comes with them.