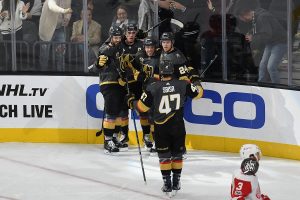 That’s the way you want it as a coach. You want tough decisions every day for your lineups. Shipachyov and Tuch came in there and score big goals for us and won a hockey game. When you’ve got hungry players wanting to play every night that’s what you want (as a coach). Right now we’ve got a good thing going everybody’s playing well and working hard. They make it tough on the coaching staff to put the lineup together. -Gerard Gallant

It’s a good problem to have, as long as everyone has a good attitude about it. Being a healthy scratch is one thing, but playing well and being sent out to the AHL is another. When Haula and Marchessault return (who were both playing reasonably well prior to the injuries), two guys have to go.

The most obvious answer to fill one of the spots is to send Griffin Reinhart to the AHL. He’s yet to appear in a game and didn’t really impress during the preseason. The other one is a bit trickier. Hunt or Merrill would make the most sense as they were reached scratched for the first four games, but it’ll be tough to send them out after Sunday’s performances.

They both played solid games and did their job, it’s good to see. -Gallant

So here we are, back where we were before the season, too many players, not enough spots and waiting for a trade, but now it’s even worse.

4-1-0 and with more good players than roster spots. Who would have guessed that?