Tomas Hyka Has Something To Prove In El Segundo

As is normal with rookie games, there’s a  familiarity with many Golden Knights rookies with the Kings roster they’ll be going up against these next two days in El Segundo. Cody Glass will play against the captain of his junior team in Portland, Keegan Iverson. Nic Hague will play against defensive teammate Jacob Moverare and Nick Suzuki will face three of his Owen Sound Attack teammates in Jacob Friend, Markus Phillips and Matt Schmalz.

But only one Golden Knight has ever actually been a Los Angeles King, and that’s Tomas Hyka. 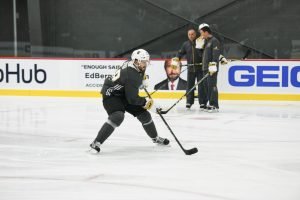 Hyka was signed by the Golden Knights nearly a month before the Expansion Draft and has been skating with the Vegas rookies despite being 24-years-old, normally a little old for rookie camp. Hyka’s still never played an official NHL game, but he’s not new to the NHL process.

In 2011, Hyka went to camp with the Philadephia Flyers after going undrafted. He impressed many in the Flyer organization even drawing comparisons to Claude Giroux. Hyka then went on to score a goal in a preseason game for Philadephia, but when it came time to sign the contract, due to a rule in the CBA, he wasn’t allowed to sign with the Flyers.

Honestly, I still don’t really know what happened there. It kind of was bad for me at the time, but I’m so happy the way it worked out now because I’m now with a new team and a new organization and I’ve got a more opportunity here to show off my skills here. -Tomas Hyka

The following year he was selected in the 6th round by the Kings. He attended development camp in El Segundo but was never brought in for a rookie camp. After a few years, the Kings forfeited his rights and the Golden Knights jumped at the opportunity to sign him.

Now, for the first time, Hyka will have the chance to get back on the ice, in a competitive game, against the team that drafted him in 2012.

It’s a little bit special. It’s been four years now so I’m really looking forward to show off my improved hockey. They’re going to see a really big difference because I was younger and now I’m the oldest guy on the team. I’m really excited. -Hyka

Hyka will play on a line with Cody Glass and Alex Barre-Boulet during the two games in El Segundo (today at 5PM, tomorrow at 1PM). He’s also expected to get some power play time with Glass, Suzuki and Alex Tuch.

He looks good without a doubt, but it’s hard to evaluate until you get in a game. Because the game is where you’ll see the North American style with the smaller ice. That’s where you’ll see some of the things that are different, maybe we won’t, hopefully, we won’t.  -Rocky Thompson, Chicago Wolves Coach on Tomas Hyka

Everyone has something to prove with roster spots on the Golden Knights, Chicago Wolves, and Quad City Mallards totally up for grabs, but as the rookie Knights take the ice for the first time, keep your eyes on Hyka, he just had that look in his eye when I asked him about the Kings, and for good reason.

**The rookie games in El Segundo against the Kings will be shown live on LAKings.com. We will tweet out the direct stream link when we have it.**