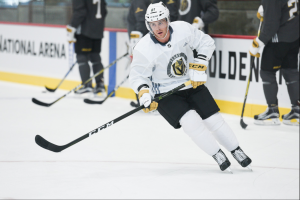 Against my better judgment, I’m here to single out another player before tonight’s preseason game in Colorado. Just as I predicted Tomas Hyka’s domination in El Segundo and Tyler Wong came through for me with a hat trick in Vancouver, this time, it’s Jonathan Marchessault.

Marchessault is going to play on the top line for the Golden Knights against the Avalanche playing alongside Vadim Shipachyov and former teammate Reilly Smith.

That very possibly could be a line (in the regular season) but we’ll see how the chemistry looks and how they work together. It’s gonna take some time. I hope it works out, they are all good players. -Gerard Gallant

Where Marchessault fits in that line is clear.

He’s a shooter, so I’ll try to get him the puck as much as I can. -Reilly Smith

That should make for two guys trying to get the puck to Marchessault. Throughout camp, the skill that’s jumped off the ice for Shipachyov has been his passing. His ability to throw saucer passes basically through defenseman is almost mesmerizing and his rapport with Marchessault seems to be growing by the day.

Multiple times during morning skate at City National Arena, Marchessault and Shipachyov were seen messing around with each other including the moment Shipachyov entered the ice. He immediately skated over and sprayed Marchessault who was on a knee tying his laces. Marchessault laughed and spent much of the rest of the practice celebrating goals he scored on passes from Shipachyov or Smith.Jon’s serious when he has to be, but he tries to keep it light on the ice. I haven’t played a lot with him. I think we only played together a couple times last year, so it’ll be fun. -Smith

In our interview with Smith he even threw a few sarcastic jabs at Marchessault hoping he would overhear the conversation. It didn’t happen, but it was yet another example of the chemistry that’s clearly forming with what could be the first line not only against the Avalanche tonight but also in Dallas on October 6th.

All three of them are top six forwards. Will they start game one together? I have no idea, but it’s a possibility they will. They are all good skilled hockey players and if the chemistry is right through camp, we like that line. -Gallant

Expect a big game from Marchessault against a rather young Avalanche roster including a 22-year-old goalie with just three NHL games under his belt. That is, of course, assuming Marchessault, Smith, and Shipachyov are able to keep up the “communication” during the game as well as they have in practice.

I feel like I’m a translator right now. I’m working on my Russian a little bit cause I don’t know any. Some of the plays he’s trying to throw up on the ice are tough to pick up on but he’s a really good player and with a lot good players, you can pretty much just read off them with what they are doing on the ice. -Smith

The Golden Knights and Avalanche drop the puck at 6PM PST and the game will be joined in progress (after Marchessault scores his first goal I suppose) on NHL Network.