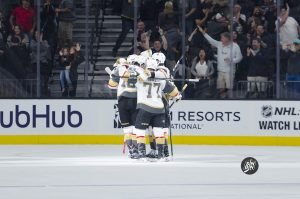 Exactly one month later, the Golden Knights look anything but afraid to play with the lead. Instead, they’ve looked like they aren’t even aware they have the lead, which is the highest of compliments. The last three wins, all games in which the Golden Knights either had the lead to begin the period, or claimed it relatively early in the 3rd, they’ve continued playing their normal style and it has paid off.

In the last game I think we were solid all over, but it’s definitely nice to just shut it down. You see the first when we were all over them, if we keep playing like that we are going to be very hard to beat. -William Karlsson

And that they have been, especially late in games.

Identify the problem, come up with the solution, implement the plan. It’s as simple as that, but only the best teams are able actually pull it off. Vegas has done it with this issue, but they’ll have plenty more to deal with over the course of the next 3/4ths of the season. This one they made look easy, hopefully, the rest are too.