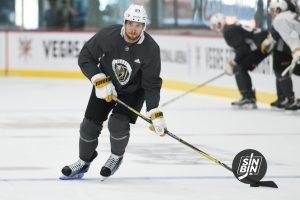 After a season starting stint in the AHL followed by a bit of a rocky start with the Golden Knights, Shea Theodore is starting to look like the player we’ve expected to see. With it has come increased time on ice overall, but specifically a much larger role in the power play.

I feel like our shots generated and our momentum coming from a power play has been good. -Shea Theodore

Theodore’s quick adjustment must make coach Gerard Gallant feel like he’s walking in socks and sandals all the time.

It really doesn’t matter. It more depends on what hand guys are shooting. As far as comfortability of moving the puck and how much time you have. -Theodore

Wednesday in Anaheim, Theodore played 20:44 of total time on ice. He played two minutes on the power play and two minutes on the penalty kill. The more telling number was TOI leader Nate Schmidt’s zero PP shifts. Which carried over from the Kings game when #88 only played 0:17 seconds of PP time. There’s a trend happening and it’s based all on trust. Gallant is finally able to use another player to lead the PP, and relieve his defensive workhorse. Having Theodore lead the PP allows Schmidt to continue his shutdown skills and keep his minutes under 25 minutes a game.

A lot of the times the d-men back there, we’re not picking up points but we’re behind a lot of the plays when it comes to breaking out the puck. We’re really coming into our own game, and trying to contribute to this offense. -Theodore

Theodore is starting to play like a veteran and talks like one too. If the team continues to play well, Gallant will be able to develop players and win games. I’m sure the head coach is thinking to himself, go ahead George trade away the team, my young guys will get us to the promise land.