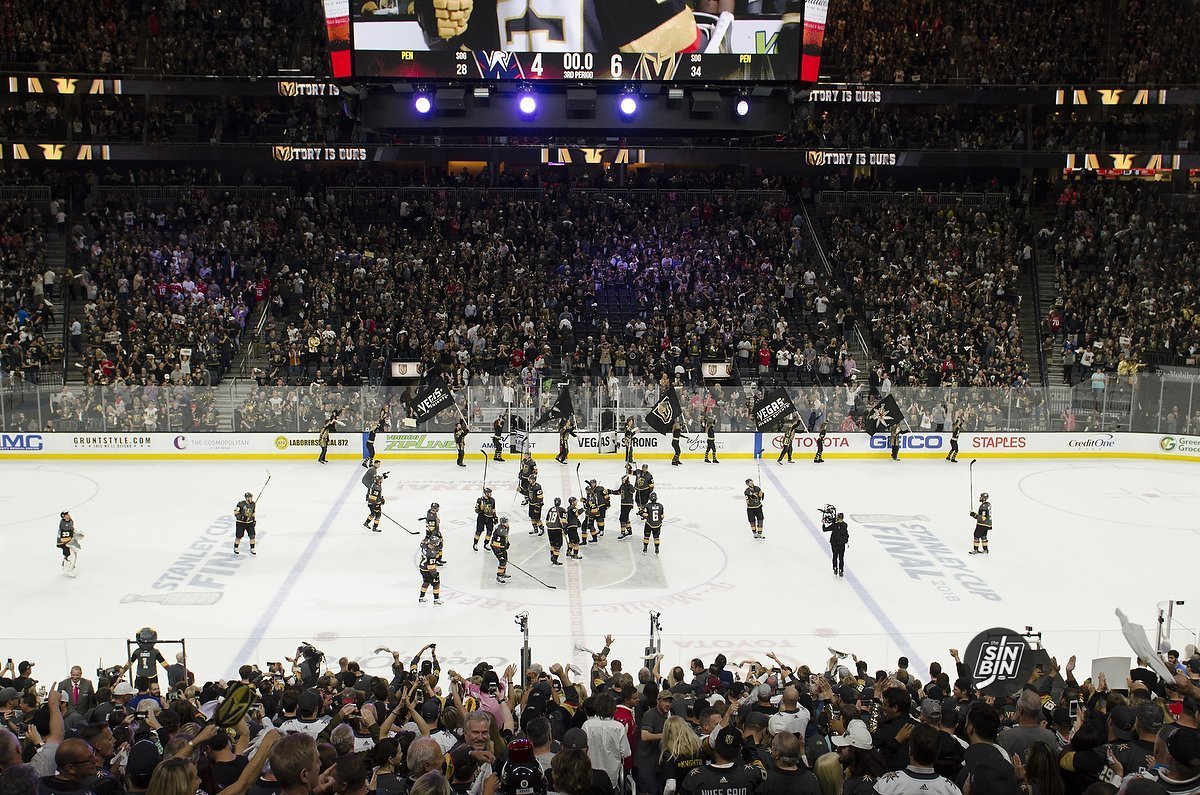 Yeah it’s awesome. We got it online watching the game. Ryan Craig, our assistant coach’s son plays on the team. It’s good seeing those kids out there representing the Golden Knights. It’s a great tournament. It’s awesome. -Gerard Gallant

The score was 3-2 in favor of the Junior Golden Knights, with a handful of big Golden Knights players watching the game on a giant flatscreen in their locker room. Colin Miller, Nate Schmidt, Jon Merrill, and Malcolm Subban all watched from one end of the locker room. On the other side were Ryan Reaves, Brandon Pirri and Jonathan Marchessault reacting to every shot.

Literally standing smack dab in front of the TV was Vegas alternate captain Pierre-Edouard Bellemare giving us the play by play.

Oh what a save… I played in tournaments for Europe but never play a Pee Wee tournaments. It’s fun. A bunch of kids that didn’t know about hockey, or didn’t fully underst… Oh C’mon ref. That should’ve been two. -Bellemare

Bellemare recognized the moment, passionately watching his young fans play in a meaningful game. The Golden Knight center wanted to get a Proud Papa type message out to the young team in Quebec.

Have fun and work hard. That’s all you can do really. This is the best game on earth, so enjoy it everyday. Never get satisfied and one day you might be where I am now. Probably better than me. -Bellemare

When the Junior Golden Knights tucked in their fourth goal the locker room erupted. And Bellemare continued to do his best Dave Goucher impression.

Two on one let’s go. Oh, what a tie drag. Seventy-one is hot, and number nine too. Nine’s going to pass it for sure… Oh, goal! -Bellemare

And by erupted, I mean, erupted. Marchessault screamed “Go Knights Go!” from his stall. Schmidt jumped up out of his locker and seemed like he had to control himself from running around the room. Reaves gave out a good shout. The entire locker room’s eyes were on the screen, and the boys paid it off.

Multiple players including Marchessault, Max Pacioretty, and Nick Holden will be attending the event which is being held directly on the ice surface at the home of the Golden Knights.

Tickets are $100 and directly support the Vegas Junior Golden Knights. To read more, and to buy tickets to the event, click here.

SinBin.vegas Podcast #144: The Deadline Is Coming