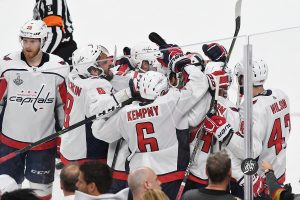 The hole is deep, but the opponent has blown leads like this before. (Photo Credit: SinBin.vegas Photographer Brandon Andreasen)

Here’s the bad news, it hasn’t happened in 76 years. Here’s the good news, it has been done. In 1942, the Toronto Maple Leafs were trailing the Detroit Red Wings 3-0 in the Stanley Cup Finals. Toronto went to win four straight games to hoist the Cup.

The silver lining, the Golden Knights will only have to win three straight.

I think at home’s our best games for sure throughout the playoffs that crowd will be getting us going for sure and we’ll be ready. -Alex Tuch

The Golden Knights have played with confidence all season, and now it’s time to dive deep down and find that assurance. It’s been a successful “one game at a time” mentality for Vegas. It’s really one game at a time right now, and there’s no room for error.

Since 1942, only that one Maple Leafs team has won the Stanley Cup series trailing 3-1. Only the 2006 Philadelphia Flyers and the 1987 Oilers pushed the series to a seventh game. So it’s possible to force a Game 7, but the odds are stacked against Vegas.

That being said, as rare as it is in the Final, teams coming back from 3-1 in the playoffs is not horribly uncommon.

This team has done it before. We’ve won three in row, and I think we are able to do it again. In the long run, if you play good hockey you’re going to win. -Tomas Tatar

James Neal has been on the losing side of many postseason series, including last year’s Stanley Cup Final. In order to not be this decades Marian Hossa (lost ’08 Cup w/Pittsburgh, lost ’09 Cup w/Detroit), Neal says it starts with the first period of the next three games.

We have no choice. We need to play together as a group, like we have all season. Focus on the first period, focus on our start, get our rest. We can’t be chasing the game. -James Neal

The numbers aren’t great, in fact they’re dreadful. However, all season long the Golden Knights have made history, so it wouldn’t be shocking to see them extend the series. It’s about time a team pulled it off since the ’42 Leafs. Oh, and there’s always this.

The Washington Capitals have blown more 3–1 leads than any other team in the history of major North American pro sports (five). I'm not saying it happens again, I'm just saying it's not over yet. https://t.co/ahWFqTJy6b