VANCOUVER, British Columbia — When the Golden Knights acquired Mark Stone at the NHL trade deadline back on Feb. 25, it was assumed the offense would perk up as Stone had 28 goals in the bank from his time in Ottawa.

But who knew the defense would be the unit that has come alive?

Collectively, the Vegas blue line corps is playing some of its best hockey of the year. And while it may be a coincidence that it has come since Stone’s arrival, the changes Gerard Gallant made a few weeks ago, moving Deryk Engelland with Nate Schmidt, playing Shea Theodore with Brayden McNabb and giving Jon Merrill a regular spot in the lineup, seemed to have worked. 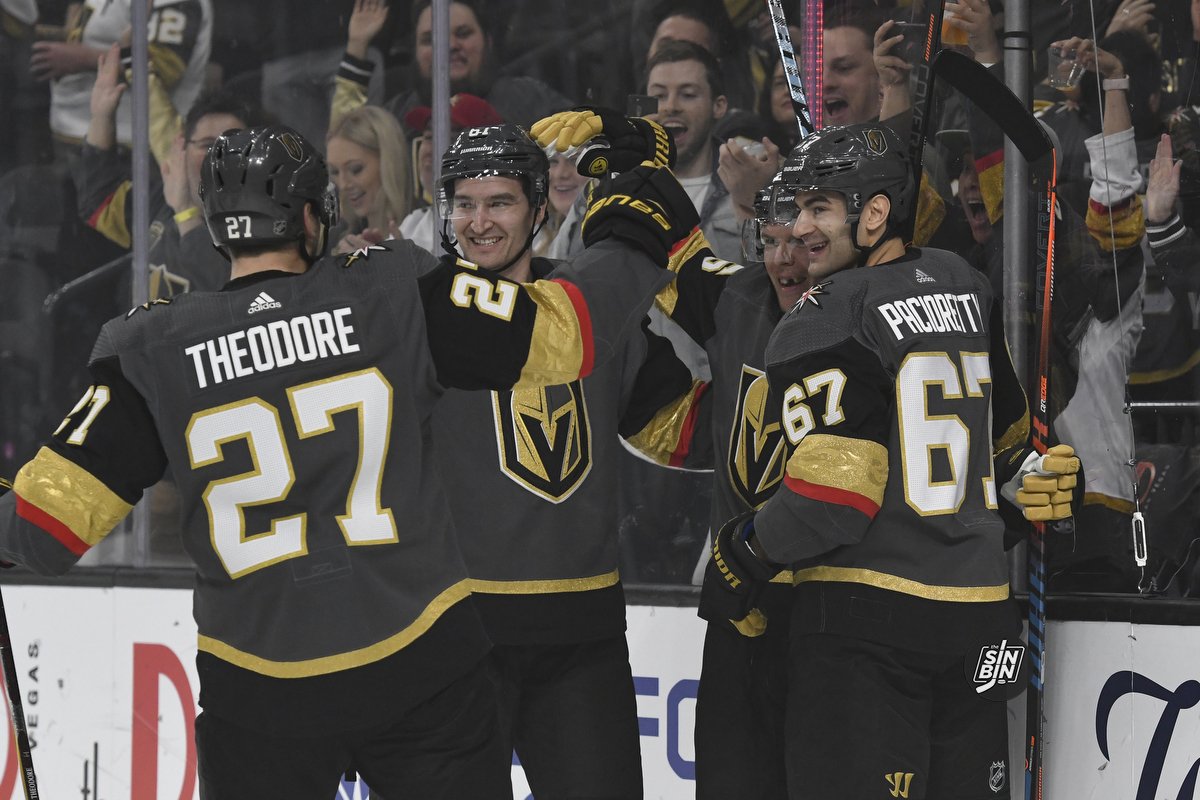 The defense accounted for both goals in Wednesday’s 2-1 win over Calgary at T-Mobile Arena. More important, the Knights have allowed just nine goals in the six games Stone has worn the steel grey No. 61.

Obviously, Marc-Andre Fleury’s play in the crease has been a big part of that. But don’t discount the job his D-men are doing in front of him.

The Knights are winning more battles in their own end. They’re more active in using their sticks to take away the cross-ice pass. They are making smarter decisions in breaking out of their own end. They are pinching in the other team’s end more judiciously and not getting caught in as many odd-man rushes the other way. They continue to block shots at a high rate. They seem to be communicating better.

All of that was again on display Saturday here in Vancouver at Rogers Arena against a Canucks team which Vegas handled a week ago, 3-0, and 6-2 Saturday for their sixth straight win. The Knights scored a franchise-record five first-period goals and there was no looking ahead to tonight’s big game at the Scotiabank Saddledome and the rematch with the Flames.

And as many predicted, Stone finally scored as a Golden Knight as he opened the scoring 1:32 into Saturday’s contest.

Gallant said you never know what’s going to happen when you change your lineup. But these moves appear to have worked so far.

It was just shaking things up. When you’re losing, you’re not happy. So we made a few changes with the D and so far it’s worked. I like the way they’ve been playing. -Gallant

You ask the defensemen what’s turned things around, you get different answers.

I think change can be good sometimes. You get a little stagnant with the way you play. I just think that it’s about trending. If you continue to play well, you want to make sure you keep doing those things that help you win. Colin Miller and Jon Merrill have been playing fantastic for us. When you have that kind of depth on your team, that’s important. -Schmidt

Theodore said the defensemen are reacting better to the puck and making the right play more consistently.

I think we’re just quick to pucks and we’re not giving them as much time and space in the corners. Usually when you give teams with good skill players time down low they’re going to make plays. I think our centers have been coming in and killing those plays and that’s been big for us. -Theodore

Engelland said it has been a collective mindset that has seen the team’s defensive uptick.

I think the whole team has done a better job. The forwards are coming back. We’re taking care of our own end first. We’re getting offensive opportunities with forcing turnovers and our speed. We’re just doing a better job as a five-man unit. -Engelland

Merrill, who has now appeared in 18 straight games, said going to the rink without worrying whether or not he’ll be in the lineup, has helped him relax.

I’m happy with the way my game has come to, but I’m more happy with the way the team has been playing these last (six) games. This is the way we need to play down the stretch going into the playoffs. You can see when we’re skating like that we’re putting pressure on teams and it’s suffocating and dominating. -Merrill

Merrill, who is playing with Colin Miller, said changes are going to happen over the course of a season and he didn’t want to make too big a deal over it.

I don’t know if it makes that much of a difference who’s playing with who. I think it was a wake-up call for the guys, saying, ‘Hey we need to pick it up’ and we have to start playing better. -Merrill

Gallant said Merrill’s strong play of late has made it easy for him when making out the lineup. Nick Holden, who had been playing regularly earlier in the year and was Merrill’s partner on many nights, is currently the odd man out.

(Merrill)’s been outstanding. He’s played great hockey for us. Jonny was sort of the seventh defenseman for us and now he has stepped up and he’s played real good. He’s got confidence. He’s gotten a chance to play and he’s taken advantage of it. He’s a good player, but it’s more confidence than anything else. -Gallant

As for Stone’s presence, the players were in agreement that he has helped tighten things up in the Knights’ defensive zone while fitting in nicely everywhere.

I think Mark coming in gave our guys a lot of confidence the way he handles the puck. I think that helped our whole group. You want him to fit in and have that comfort level with everyone. -Schmidt

You look at his defensive play … I don’t know how many times he has stripped guys of the puck. I think it’s a big attribute to his game and he makes a lot of big plays. He’s obviously a very good player and he has done a really good job fitting in. -Theodore

He’s a great guy. He’s been here a couple of weeks and he’s fit right in. He’s a complete 200-foot player and he’s great defensively. -Engelland

I think it sent a message down from George (McPhee) and the front office that they believe in this group. They added a strong player in Mark Stone and we’ve responded pretty well to it. –Merrill 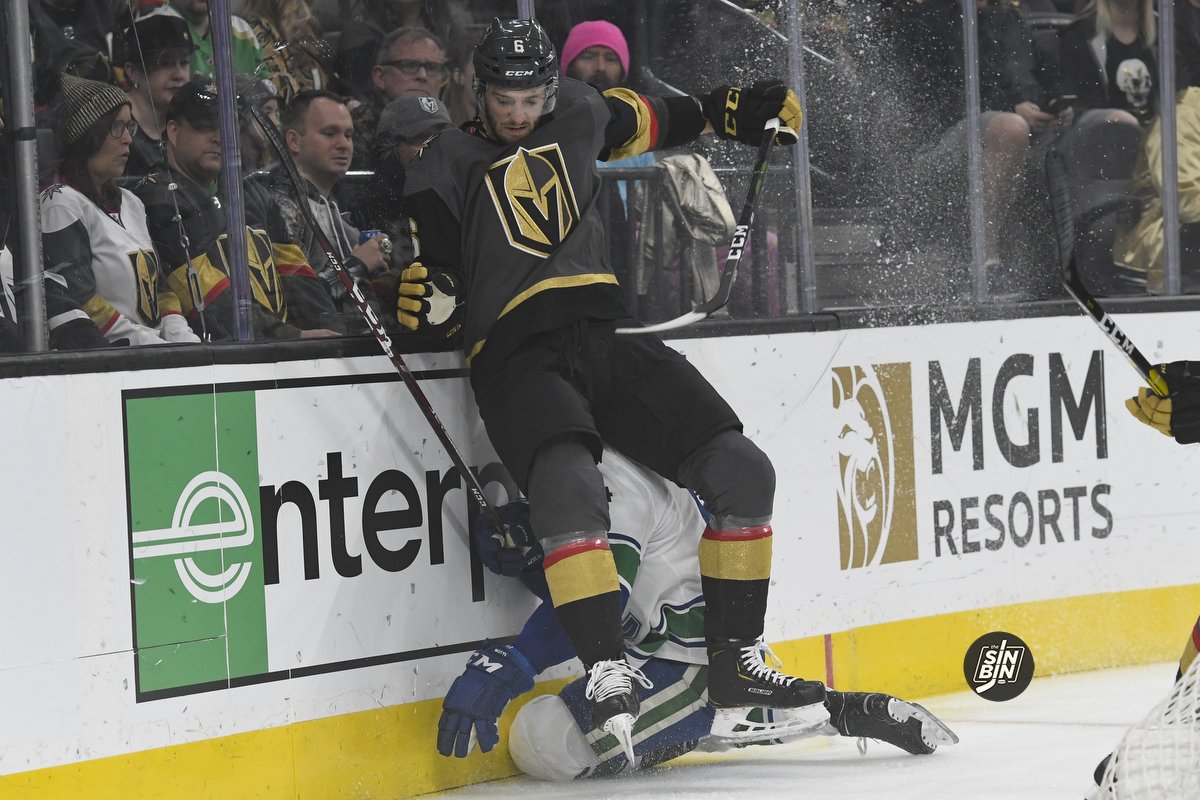 The timing is perfect for the Knights defense to bounce back. They have 13 games left, beginning tonight in Calgary. They trail the Flames by eight points though the Flames have a game in hand. Still, tonight is a four-point game. There’s time to move up in the division standings.

You never say never. I’m sure there’ll be some blowover from the last game. It’s going to be an intense match. But this is the time of the year where you want to be playing your best hockey. This is it. You can’t just turn it on when it’s playoff time. Your body’s tired. Your mind is tired. It’s about consistent habits. It’s the foundation of how you’re going to play the rest of the year. -Schmidt

If the Knights do manage to pass Calgary and possibly catch first-place San Jose, the play of their defense will have played a major role.

There was some personal sadness Saturday for me while here in Vancouver.

One of the reasons for me making this trip for me was to catch up with a good friend of mine, “Vancouver” Dave Foley, who splits his time between here and Las Vegas.

I hadn’t seen Dave since September when he told me he was headed to Colombia for a few months. He was going to spend some time in South America, then head back to Canada and eventually return to Las Vegas where he has a home in Summerlin.

Prior to the game, I got a call from Rob Pallin, another good friend and a mutual friend of Dave’s. He said Dave had gotten sick while abroad and had died a couple of days ago.

I had called and texted Dave prior to leaving for Vancouver and hoped we could connect. He never responded. Now I know why.

Dave Foley knew hockey. He loved the sport and he was excited to see the Golden Knights have success so early in their tenure. He would accompany me to practice on occasion and he really enjoyed being at the rink.

We would sit on the patio at the Starbucks in Trails Village in Summerlin or at the Egg Works across the street and talk about the Knights, the NHL, everything hockey. He had grown up with the Canucks but his love for the game extended beyond Vancouver.

Dave was one of the most knowledgeable individuals I had ever met. He was a kind soul and a gregarious fellow. He was so supportive of my efforts to write my book on the Golden Knights and when he read through the manuscript last July, he predicted it would do well and he even thought about financially backing the project.

Ultimately, he decided to pass, which was fine. But I’m going to miss his friendship, his knowledge, wit and wisdom. Rest in peace, my friend.